I've been trying to understand the derivation for the Cauchy Momentum Equation for so long now, and there is one part that every derivation glides over very quickly with practically no explanation (I'm guessing they assume the reader knows it already).

The part I'm stuck with is how they relate stress tensor, $\sigma_{ji}$, to the sum of the forces' on a infinitesimal block of volume $dV$. I'll give you a bit of the context of the situation I'm in. Here's how this part of every derivation goes.

How on earth is the total stress force in a particular direction (used as a body force) given as the rate of the stress variation in that direction?! I see how the units work out, but I can't see any logic behind it. I thought that $\sigma_{ji}$ represented the stress (force per unit area) on the $dx_j$ side pointing in the $i$ direction. If that's the case, how do the relate that surface force to being a body force, especially in the way that is stated above (saying it's the rate of stress variation in that direction)?

Recall the Gauss' divergence theorem by which:

Therefore, the equilibrium equation is no longer mysterious, and the sum of forces is the internal forces $F_{int,i} = f_i\text{d}V$ plus the forces applied on the surface $F_{sup,i} = \sigma_{ij}\text{d}S_j$:

To understand why the components of the stress tensor can be understood as the forces on the surface, it is only necessary to reflect on this representation: 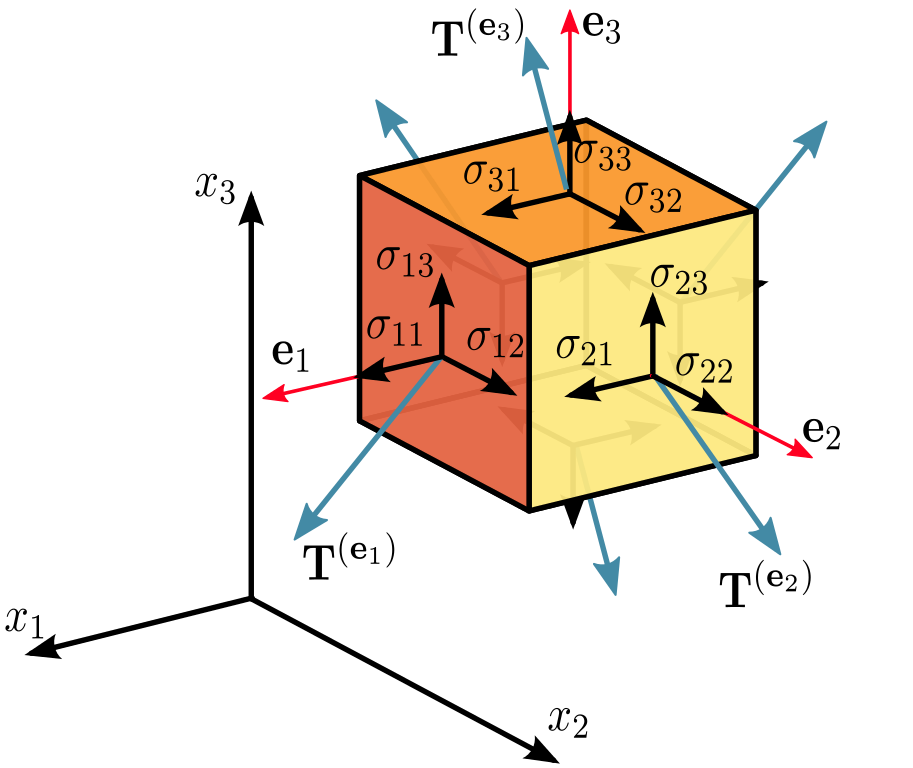 Not the answer you're looking for? Browse other questions tagged classical-mechanics tensor-calculus stress-energy-momentum-tensor continuum-mechanics navier-stokes or ask your own question.