Hi all I hope you can help me with the statistical origins of the Second Law. I cannot find anything that mathematically proves that order from disorder is impossible only improbable

Leading me to think that a system (Kelvin engine) that allows order to be created from disorder (work from ambient temp) is possible if it is probable ??

To be more specific what fundamentally prevents a system creating unidirectionality. If you can achieve this somehow then the second 'law' falls down. doesn't sound like a law at all?

Can someone assist to shoot this down? 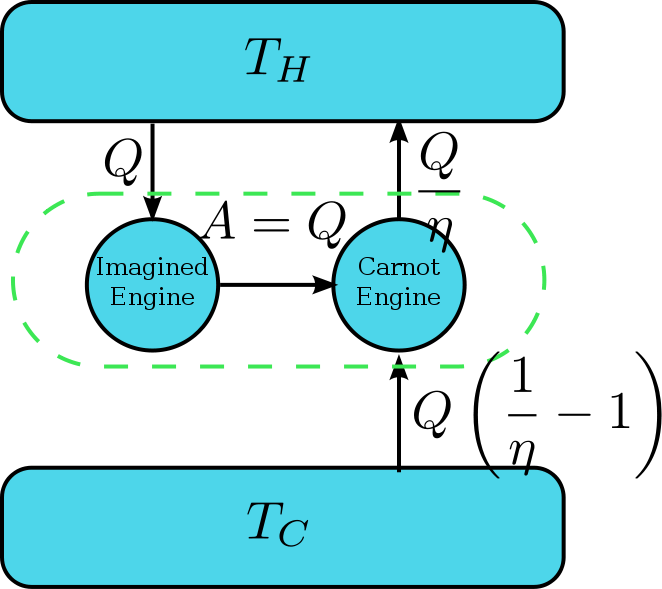 Or framed another way Isn’t the equivalence argument cyclical as if the imagined Kelvin Engine is generated from an original statistical bias (a way to create order from disorder) then all the assumptions proving this are baseless as we are just using a the absence of statistical bias to prove we can’t have a statistical bias ? This is the assumption that I ask you to suspend – Assume that a fixed number of microstates all are equally probable and all microstates encourage order. The scenario I propose (however far-fetched) is one where order can be created by movement between fixed equally probable microstates at static** temperature–

What I am chasing is a mathematical proof that prevents such a initial statistical bias existing which is creating work (order) from random movement (disorder) and nothing changing over time as Q enters the system to balance W removed.

I think you have a misunderstanding of the second law. The second law is statistical, not deterministic. For instance, once you reach thermodynamic equilibrium, that is, the largest entropy state, fluctuations will start to occur in any direction. It is possible that a broken egg goes back and reconstitutes itself, but the likelihood of that even has been calculated. A fluctuation to a state of entropy smaller than the equilibrium entropy by an amount $ \Delta S $ requires a time with a likelihood proportional to $e^{t\Delta S}$. See http://en.wikipedia.org/wiki/Poincar%C3%A9_recurrence_theorem

It seems to me you are conflating micro and macrostates. Entropy is not a property defined for a specific microstate but for an ensemble. When we describe a system in terms of pressure, entropy, etc instead of the momentum and position of each particle we are giving up the possibility of discussing specific microstates. The 'states of high order' you are thinking of are specific instances of microstates included in the initial ensemble. It is possible that such a specific microstate is also included in the ensemble of other macrostates but that overlap is fortuitous and not something that can be exploited.

6
Is the second law of Thermodynamics an immense tautology?
10
When are all microstates equally probable?
6
Conflicting Perspectives on Entropy and the Second Law of Thermodynamics
0
If all microstates are equally probable, why does entropy tend to increase?
2
Increase of entropy as statistical necessity via fundamental assumption of statistical mechanics
0
Temperature from the Gibbs entropy
2
How can entropy always be increasing, while each microstate (among which low-entropy micro states) is equally likely to occur?
0
Is it possible for a particle to have all the energy of the Isolated System of particles?
57
How do different definitions of entropy connect with each other?