Friction in Slipping and Rolling

I'm solving a rotational motion problem that involves slipping and rolling. The problem's basic setup has a sphere rotated and then placed onto the ground, at which point it begins to acquire translational velocity. A solution in my textbook assumes the following:

"Once the ball starts rolling without slipping, there is no more frictional sliding force, and so the velocity will remain constant."

Why does friction stop exerting a force? Am I mistaken that friction exerts a force whenever an object and its surface might be distanced from each other? 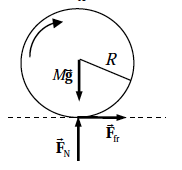 To answer your questions in short:

The quote you give does though mention constant velocity. That is the same as saying no acceleration and of course also no angular acceleration. When that is the case, which it will be after some time, all torques must sum up to zero. So, if friction is the only force that causes a torque, then friction must be zero. Friction is only making the wheel start speeding up it's rotation - it makes the wheel start to turn, when your car speeds up. But when the rotation is constant, there is no more friction - just like when the block is sliding with constant speed on the ice, or when the space shuttle is drifting at constant speed, there is no friction that brakes it.

Yes, you are mistaken. If I lift a bag of potatoes from the floor, there is no friction.

But I know what you mean: what if you move the object in parallel along the surface. Still, ideally you can have a no-friction icy surface, but apart from that I guess not.

Friction will not stop. Friction is responsible for the wheel's horizontal motion. However, the velocity will become (and remain) constant.

The rigid body, or ball in the picture described above has an applied force on it. The frictional force will continuously increase until it reaches a maximum static frictional force.

The static frictional force is defined by

At that point, the object begins to slide and static friction no longer applies. Instead, between the object and the surface that it is sliding on, there is a more or less constant kinetic frictional force which can be defined by: $$f_k = \mu_k F_N$$

Am I mistaken that friction exerts a force whenever an object and its surface might be distanced from each other?

It depends on what you mean by "distanced". If the object is still in contact with a surface, it will experience friction. However, if you pull the object and lift it away from said surface, it will of course, no longer be under the influence of friction. Instead you are holding the object in a fluid (e.g. air) and depending on the applied force, can experience another non-conservative force such as air resistance.

The prevailing answers seem to all suggest that friction does not stop. If that were the case, since there are no more horizontal forces, there would be some kind of horizontal acceleration due to $F_{net}=ma$, but that's not the case.

The answer is that friction no longer exerts a force when the ball is rolling without slipping. Let's try to unpack that statement, by considering examples where friction does and does not exert a force:

In this case, friction does not act, since no relative motion.

In this case, there would be friction, since there is relative motion between the ground and the sack of potatoes.

In this case, there is friction, but in the form of static friction, which prevents what would have been relative motion had the friction not been present.

In this case, the rolling ball is most similar to case 1, because at every moment in time, the bottom of the ball has no relative motion with the ground, and there are no other forces that would perturb it. This is why, in an ideal scenario with no other sources of friction (i.e. rolling friction), a ball that is rolling without slipping would keep rolling indefinitely.

0
Work done by frictional force when rolling without slipping

11
Is work done in rolling friction?
1
What causes angular and linear deceleration in a sliding and rotating ring?
2
Rolling Without Slipping and Rotational Energy
0
For a solid sphere rolling (pure roll) up a slope (with friction) does friction play a role in slowing it down?
3
Why do the expressions for an object rolling down an incline not depend on the coefficient of static friction?
2
Rolling of an object down a slope
0
What is the distance acted by the kinetic friction in a slipping ball until it starts rolling?
6
A bowling ball on an infinitely long track