How can pseudospin be a vector? (Graphene)

In graphene science, I don't understand how one interprets pseudospin as a vector. I thought 'pseudospin' was the vector of Pauli matrices. So how can it be a vector that one can plot for example in the image below? Moreover Pauli matrices contain just numbers $(1,i)$ so how can it change direction?

I think I must have missed the point entirely, perhaps someone can nudge me in the right direction to understanding this. 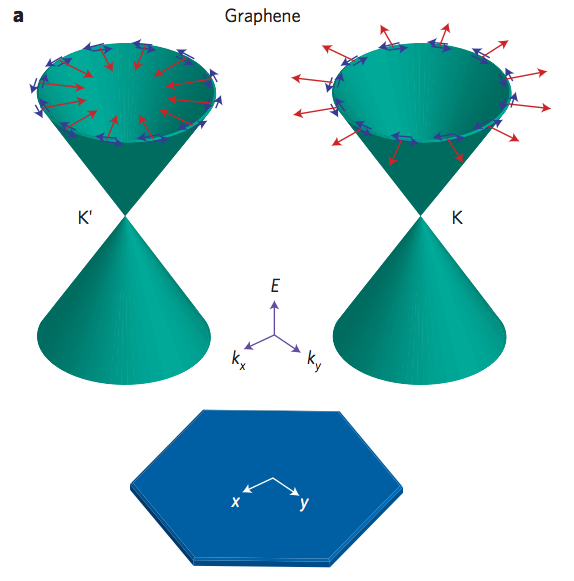 In order to appreciate the periodicity of graphene one has to recognize that it consists out of two interpenetrating hexagonal Bravais sublattices, A and B, which together make up the honeycomb lattice. The two sublattices are like two degrees of freedom, and the electron can have an amplitude to be on sublattice A, and an amplitude to be on the sublattice B. The presence of the sublattice basis $\{|A\rangle,|B\rangle\}$ resembles the case with spin one-half particle, where an electron can be in spin-up state $|\uparrow\rangle$, spin-down state $|\downarrow\rangle$, or any superposition of these. The sublattice basis is therefore called a pseudospin.

Now, recall that the superposition of the form

Also, it seems you may have misinterpreted the vector of Pauli matrices $\boldsymbol{\sigma}=(\sigma_x,\sigma_y)$ in the Hamiltonian of graphene ($H=\hbar v_F\boldsymbol{\sigma}\cdot\boldsymbol{k}$) as pseudospin. This is an operator, and not pseudospin itself. Finally, the valley degree of freedom is sometimes referred to as valley pseudospin, more often as valley isospin, and most often as just valley, and should not be confused with sublattice pseudospin.

Not the answer you're looking for? Browse other questions tagged quantum-spin dirac-equation graphene dirac-matrices or ask your own question.