So I am kind of confused about the role of force when calculating work. Specifically, when defining work using a line integral. There is a paragraph in my calculus book that is really throwing me off and its really bugging me so much I can't continue reading unless I fully understand what's going on. It is the part where it talks about how

"For a curve $C$ in space, we define the work done by a continuous force field ${\mathbf F}$ to move an object along $C$ from a point $A$ to another point $B$ as follows."

My problem is how can such a force field specifically move an object from point $A$ to a point $B$. Isn't this only true when the magnitudes of the ${\mathbf i}$ components in both ${\mathbf r}$ and ${\mathbf F}$ are greater than the magnitudes of the ${\mathbf j}$ and ${\mathbf k}$ components. I am aware that when a force is applied perpendicularly to motion, there is zero work. When force is opposed to motion work is negative. When force is in the direction of motion work is positive. Force can initiate motion when an object is "stationary," and so this object moves in the direction of the force.

Doesn't the position function ${\mathbf r}(t)$ imply that a particle is traveling through the curve from $A$ to $B$, separate from the influence of the force field since that is how parameterization is defined? Furthermore, isn't the force field that acts on such a particle that is moving on it's fixed path or curve $C$ merely just changing the energy and speed at which the particle travels?

For example, in one of the pictures there is a curve that has a loop. Now suppose a part of the loop causes the particle to travel against the force(when the velocity vector and force vector at that point in space are parallel and opposing), it would then slow it down, but when it turns back around in the opposite direction it accelerates again. If the force field is the only thing to initiate motion and perpetually "move an object along $C$ from a point $A$ to another point $B$" it will not always be able to move it to point $B$.

For example, if the particle has a path in the direction of the force field then takes a $180$ degree turn shortly after and follows a very long path opposing the field before turning back around to approach the point $B$ again, it will not have gained the momentum or velocity to do so since the force would have slowed it down and perhaps sent it back to $A$. The paragraph is implying that the force is dictating the position function ${\mathbf r}(t)$, meaning that ${\mathbf r}(t)$ does not have a fixed position function and is free to move along the force field ${\mathbf F}$. I think this is defined incorrectly.

The way I think of it, the particle is moving analogous to a spaceship in space but constrained by a curve like train tracks that is defined by ${\mathbf r}(t)$, $a < t < b$. Furthermore, work is measuring how much energy is applied to the particle. At the times when the force field opposes the motion negative work is done and so slows down the particle decreasing its kinetic energy, and at times when motion is in the direction of the force field, positive work is produced [and thus the kinetic energy increases due to force field accelerating the particle, right?].

The force field does not necessarily move the particle all the way through the curve because that would simply be impossible if the motion of the particle only comes from the force field, which is what the definition is implying. If the particle is moving because it is defined by ${\mathbf r}(t)$ what does the force do? Does it make it move faster? What is the meaning of work and what is it describing? Does work measure/describe the energy applied to make it move or rather move faster?

The way I see it is the calculation of work using the line integral is really measuring how much energy is required to move a particle from a point $A$ to a point $B$ in the presence of a force field. I could be wrong, but this what how I see it make the most sense. I need a clarification, please! Thank you. 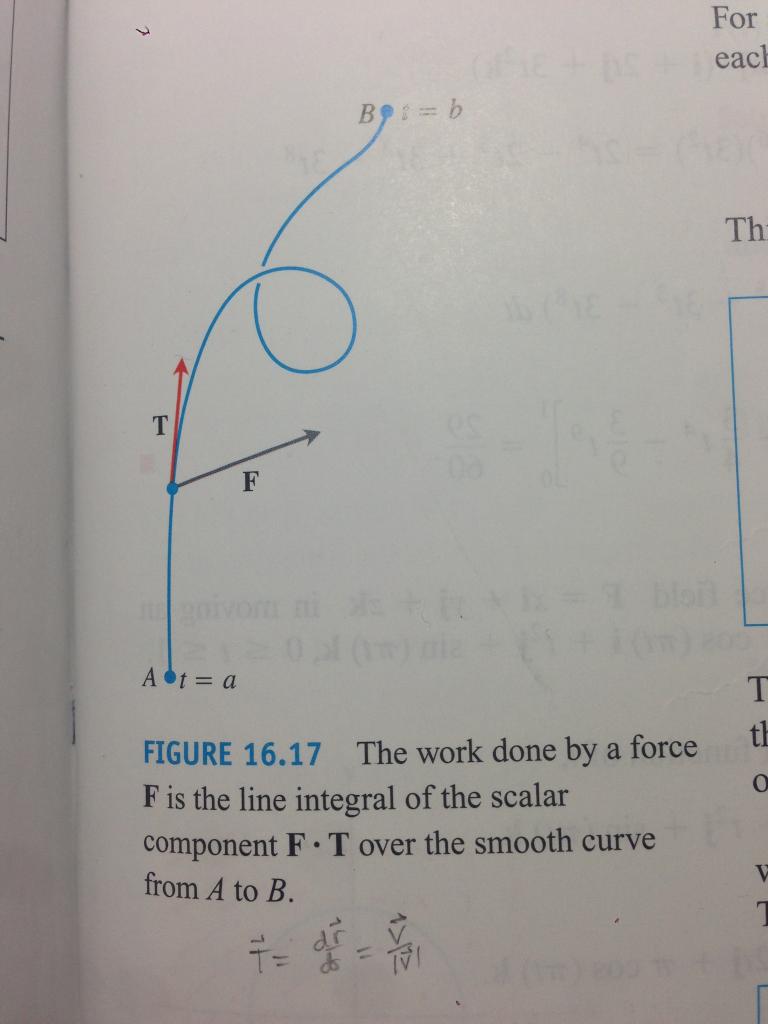 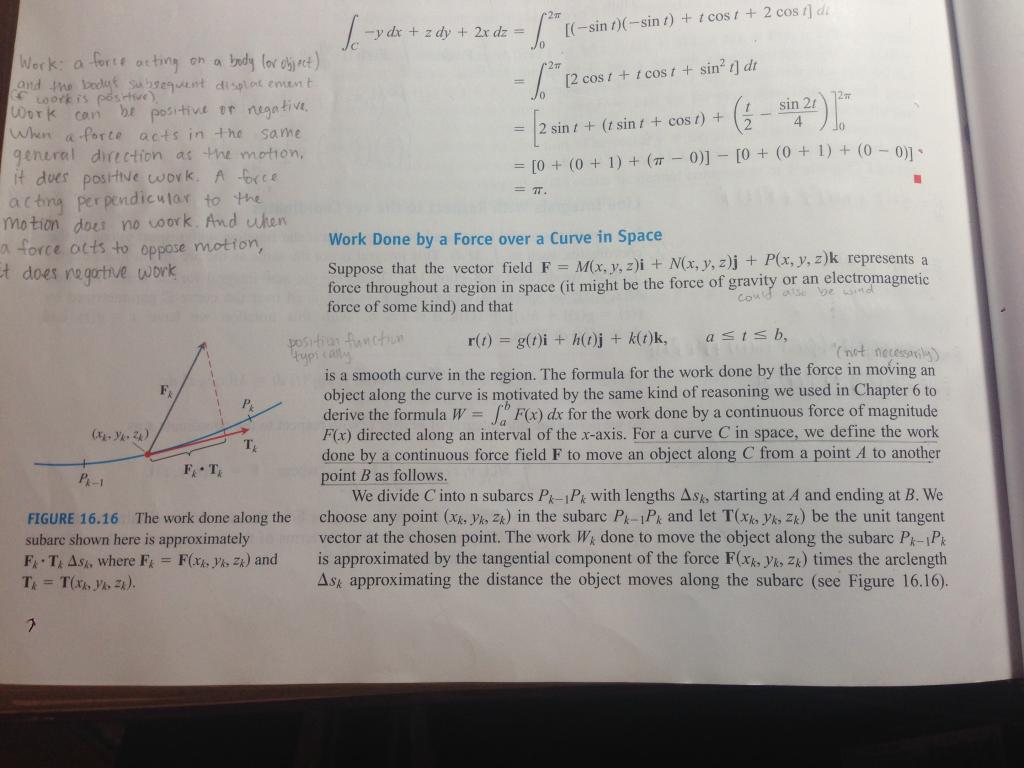 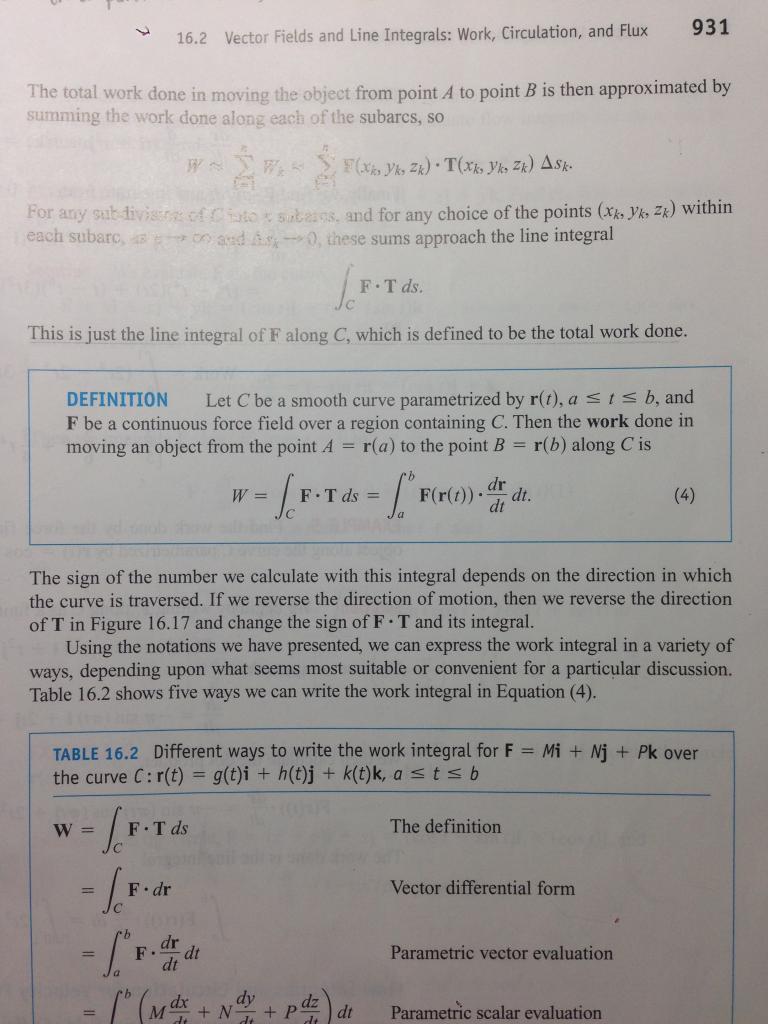 The paragraph is implying that the force is dictating the position function r(t). (...) The force field does not necessarily move the particle all the way through the curve because that would simply be impossible if the motion of the particle only comes from the force field, which is what the definition is implying.

I think that you're confused about the meaning of the $\vec F d\vec r$ - term. You seem to think that this term means that the force is pushing the particle along the path $C$, but this is must not be the case. Think of the blue line like some sort of rod where you can push a bead along. Now you calculate the work for this path $C$. When $\vec F$ is parallel to the blue line, you get positive contributions to the work, when $\vec F$ is perpendicular then you got no additional contributions etc.

Now the point is that the work that you calculate using the definition given is a number independent of the initial velocity and weight of the bead. If that trajectory is even possible and you gain velocity or if you have to put work into it when you push that bead from A to B is a different question.

The work done from the force-field on a particle along the path $C$, which starts at A and end at B, changes it's kinetic energy:

When the work done is positive , then you have for the kinetic energies

which means that a bead, which started at A, is faster at B.

When $\vec F$ is always anti-parallel to $d\vec r$, then the work done is negative and

Say the bead is at rest at A and you want to push it so that it is rest at B. $\vec F$ from the field is always opposed to the $d\vec r$ from the bead. How much work is required?

So in this case the energy required is exactly the work calculated.

Doesn't the position function r(t) imply that a particle is traveling through the curve from A to B, separate from the influence of the force field since that is how parameterization is defined? Furthermore, isn't the force field that acts on such a particle that is moving on it's fixed path or curve C merely just changing the energy and speed at which the particle travels?

First of all, your assumption that r(t) is separate from the influence of the force is wrong. Let me explain with the help of a simple example:
Let's say we have an object of mass "m" which is held at height "h" from the surface of earth. And suppose the height h is not large enough so that earth's gravitational field can be considered constant. If the object is released from this height it would follow the straight line path to the surface of the earth. Now here the position function r(t) is a straight line and is caused due to the "gravitational field" of earth and not due to some external influence. The work done by the field in bringing the object down is simply "mgh". Clearly we have to know before-hand which path i.e., r(t) the object is going to take to calculate the work done on it.
Now let me explain the definition of work given above:
The definition of work given in the book assumes that the particle is moving in some field and the only force acting on it is due to the field. In such a case if particle follows a path r(t) due to the field. The work done by the field is defined as the dot product of the force with the path r(t).
Hope that clears the doubt.

I believe there might be a slight confusion between the whole "cause and effect" of the particle's position and resultant force throughout the motion.

Now, onto the definition of the integral.

For the case of a constant force, work is defined as the change in displacement multiplied by the component of the resultant force in the direction of the displacement. Fair enough. This can be equivalently stated as:

This is because the dot product has the geometric meaning as the magnitude of one vector multiplied by the component of magnitude of another vector in the direction of the first vector, i.e.:

where $\theta$ is the angle between the positive directions of the vectors.

This definition of work only holds for constant resultant forces, so what happens whenever resultant force varies throughout the motion? If you are dealing with varying force, then consider an infinitesimally small portion of the motion at a particular time $t$, where the particle undergoes an infinitesimally small change in displacement, $d \vec r$. Because it is such as small portion of the travel, we can assume the force, $\vec F(t)$ to be constant in this space of time, so we can determine the small amount of work done, $dW$:

Now, to find the total work done, we add up all the little portions of $dW$, which is what take an integral is. We want to find the work done between positions A and B, so...

This is the same as the provided definition of:

Note that the work done on the system can be viewed as the change in kinetic energy. This can be shown as follows:

Not the answer you're looking for? Browse other questions tagged forces work definition vector-fields or ask your own question.