I've only had a very brief introduction to Lagrangian mechanics. In a physics course I took last year, we briefly covered the principle of stationary action --- we looked at it, derived some equations of motion with it, and moved on.

While the lecturer often referred to it as the principle of least action, he always reminded us that it wasn't actually least action, but stationary action --- a minimum, maximum, or point of inflexion, rather than just a minimum. He never, however, gave an example of a system where we didn't seek the least action.

Why is it, then, the principle of stationary action, instead of least action? What is an example of a system which we would seek a maximum instead of a minimum? 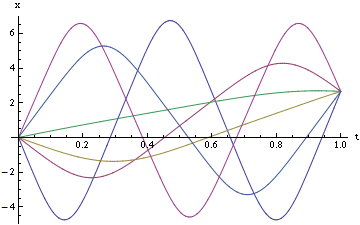 They differ by initial velocity. Now each of them satisfies equations of motion, but only one makes the action minimal, here's how $S$ depends on $v_0$ for such paths in this example: 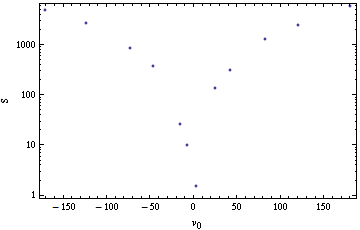 As all they satisfy equations of motion, they make the action stationary, and it'd be wrong to just throw them away because they don't minimize the action.

In optics, you can take the example of a concave mirror : the optical path chosen by the light to join two fixed points A and B is a maximum.

22
Confusion regarding the principle of least action in Landau & Lifshitz "The Classical Theory of Fields"
15
In the Principle of Least Action, how does a particle know where it will be in the future?
10
Is Action Always "Locally" Least?
7
Principle of Least Action
6
Type of stationary point in Hamilton's principle
5
Action max, min, or saddle?
2
Classical trajectories that are not a minimum of the action
2
Max & inflection point in the principle of least action
2
Principle of Most Action?
1
Do solutions to the Euler Lagrange equation for physical Lagrangians actually minimize the action?
See more linked questions