I'm reading John Taylor's Classical Mechanics text, and I'm a little confused about something in chapter 8, which deals with the two-body problem with central forces.

The issue is with the equations of motion. He shows that in the CM frame (center of mass is stationary and is taken as the origin), total angular momentum is conserved and so the motion takes place in a fixed plane in this frame. Then he uses polar coordinates to derive the angular equation $\mu r^2\dot{\phi}=l=constant$, where $\mu$ is the reduced mass and $r$ is the relative length between the two masses. Now my confusion is that I'm not really sure how $\phi$ is being measured. Initially, I thought it was referring to something like this: 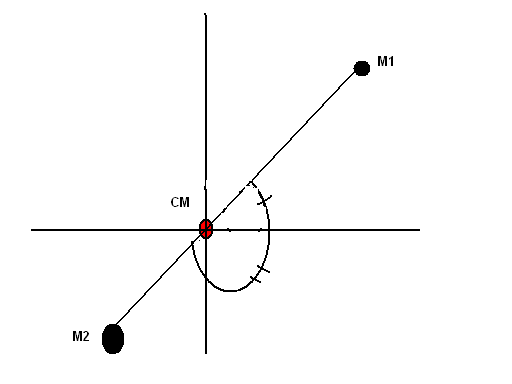 And there is an obvious ambiguity in how you arrange your coordinate axis and it would also be unclear how you measured $\phi$. I asked my professor, and he said it has something to do with the total angular momentum $\vec{L}$, but since this is always perpendicular to the plane of motion, I don't see how you could use it to measure $\phi$. I'd appreciate it if someone could clarify this for me.

I can't quite follow your diagram. The angle can be measured from any line in the plane of motion to the line from the origin to either mass. The angle $\phi = 0$ represents the line you choose as your datum. The positive direction can be chosen arbitrarily as long as the choice doesn't change.

The differential equation of motion doesn't care where the angle $\phi=0$ is. The importance of that angle arises when the initial conditions are applied.