Can you travel through the air using falling rubble?

As seen below in Dragonball Z, we can see Uub jumping from one piece of rubble to the next to reach Goku in mid air. This kind of scenes are seen often in cartoons, so it made me wonder if physically speaking it would be possible to actually jump from one rock to the next as Uub did? Not sure whether this is relevant to the question, but the rocks are flying towards Goku in the pictures.

The same goes if you for example would step on a trap made out of rocks and branches put over a hole, would you be able to jump back up from the falling rubble if your reflexes are quick enough? Or would you just push the rubble down instead and fall with it? 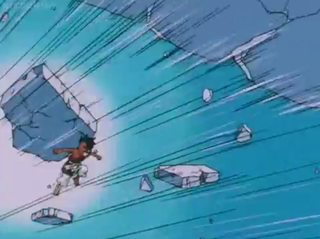 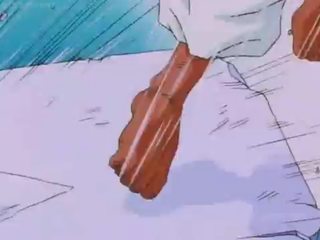 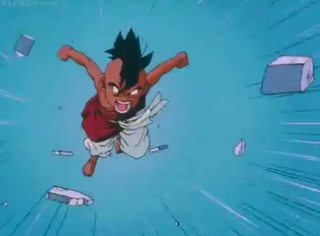 If you think about it, this is what a plane (or helicopter) does all the time. It "jumps" from one air molecule to the next, pushing them down and using them to stay up. The key is to push enough rubble (air) down with enough speed to offset the pull of gravity. This means that the total rate of change in velocity of the material $m\Delta v$ must be greater than $F_g \Delta t$ (where $F_g$ is the force of gravity on your cartoon hero).

So - push some heavy objects down by a bit, or push lots of light objects down with high velocity. If you have cartoon legs you can do this. If you bring actual biomechanics into it - not so much... And as Dirk Bruere pointed out - you need to figure out how not to be hit by the rubble coming down - so you have to move laterally at enough speed that the rubble arrives below you and that you can push down on it. That's quite a trick, right there. The plane solves this problem by not caring about being hit by air molecules (the wing is shaped to let them flow past) and by having molecules "everywhere" so the timing is always right. When you go to a discrete (lumpy) scenario with rubble, it's much harder.

Yes, It is possible. But only and only if you are capable of applying a force of more than your weight on the rubble.
Though the combined center of mass of rubble and you will still be falling with same acceleration.

Yes, but... like the previous answer you would need substantial muscles. However, there may well be another factor, which is terminal velocity. The rubble looks fairly big in the pics and has maybe 5x greater density per cross sectional area than the hero. That means it has a higher terminal velocity. So if the hero jumped off a piece it would fall faster than him. He could jump up, but not jump down. Across and up is feasible.

Theoretically, yes. You can jump from a heavy rock or debri from the rubble using the fact that momentum is conserved and the heavy rock gains little velocity during your jump.

Practically, I'm doubtful. For your jump to be as effective and as Uub's and if you want to cruise through the air with such speed, you need very heavy rocks. I don't know how you're going to throw such heavy rocks into the air; and I'm doubtful that any sane human being would dare to move in a rubble of those heavy rocks. Maybe Goku would !

7
Falling through the rotating Earth
3
What if exactly half the Earth's population jumped at one instant? + Secondary Question
3
Why would the apple fall under the tree?
0
Problem of uncoupling a train
0
What would happen if a ball flew through the open window of a car?
0
Is this assertion about chains in tension correct?
0
Understanding positive and negative shear strength sign
70
How exactly is a normal force exerted, at the molecular level?