Other explanation for cosmological redshift?

I'm interested if any of the following explanations have enough predictive capability to explain the observations we see today. The claim is that the Universe is not expanding, and that red-shift of light is caused by: 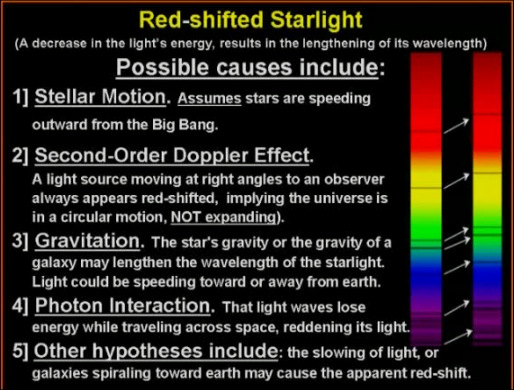 Though a couple of these are simply ridiculous, I'm still interested. Keep in mind that I am not a creationist, but am looking for reasons to see if any of these are valid or invalid.

Stellar motion would imply we're in the place where the Big Bang occurred while everything else is speeding away from us. I can see how this would be a worthwile explanation for a creationist, but it doesn't really make much sense building just on physics.

Doppler Effect has the same issue - it assumes that every star we can see moves in a speed proportional to distance with respect to us. That's extremely Sun-centric, and doesn't really work if you accept that e.g. stars in our galaxy orbit around its center, including us.

Gravitation of course does have effect on wavelength, but it's by far not enough for common stars, much less planets. And of course, the effect is only at work when you're in the gravitational well - this would imply that the Sun is again at the center of everything, with everything else orbitting around it.

Photon interaction - never been observed, doesn't really play well with accepted theories of electro-magnetism and photons. With the exception of - the expansion of space itself. Yes, photons are losing energy, that's why they're red-shifted. Even though there is a certain preference for photons to fill in similar states, this mostly manifests as a tendency for self-collimation. Interacting photons would not explain why the red-shift is correlated with distance either.

The others work in a similar fashion. Slowing of light would have huge effects on every interaction in the universe - which would mean that even things like water wouldn't be stable over time, they would change their behaviour rather a lot. Combined with the proposed age of ~6000 years for the universe, with humans from the very beginning, this is just absurd. The assumptions made by theory of relativity make this even more crazy - in relativity, speed of light is basically the maximum speed of propagation of information. So this hinges on older models of the speed of light, independent of the space-time itself.

Galaxies spiraling towards the Earth was already handled in the Gravitational red-shift explanation and the Doppler effect.

All in all, you can see why a creationist-proponent would like those theories. They mostly work on the basis that we are at the center of everything, and everything else revolves around us. It's the good old Earth-centric solar system model again, just dressed in the universe this time.

The problem is, addressing every single hypothesis put forward by people lacking in basic science practice and knowledge is fighting windmills. You can always imagine sillier and sillier explanations, and when people finally get tired of responding, you'll just say "See? The scientists have no explanation for that!" It's an uphill battle, and somewhat pointless, really.

Don't forget that when you propose an alternative theory/hypothesis, you need to explain everything the old theory did. If we find out that photons travel at lower or higher speeds than the speed of light, it might put relativity out of the question, but we'll still have to find out why it works almost all the time we've checked. It's possible to "overthrow" a well estabilished theory, but most often, you're only adding to what's already there. For example, Newton's law of gravity is wrong, but it's not thrown out outright - it's simply explained differently, and broadened to explain new observations. Most of the time, it works well enough. If it starts contradicting your observations (like the famous precession of Mercury issue), you start refining - in this case, Einstein pretty much redefined the whole universe. But it didn't make the old theory wrong outright - just incomplete. Creationist hypothesis tend to ignore this completely - they focus on one pet theory, and ignore the other explanations that need to be done to maintain a consistent model.

Another line of thought is that there are other observations that support the notion of an expanding universe - it does not all hinge on redshift.

For instance, I believe numbers 3 onwards would struggle to explain why the light curves of otherwise similar supernovae become stretched (at a variety of wavelengths) at larger distances from us and by an amount equivalent to the redshifts determined for their host galaxies.

Photons interacting with something

There are various problems with this, including problems explaining surface brightness. For more information, see http://en.wikipedia.org/wiki/Tired_light

There are strict empirical limits on cosmological rotation. See this answer: https://physics.stackexchange.com/a/12781/4552

With the exception of - the expansion of space itself. Yes, photons are losing energy, that's why they're red-shifted.

This is incorrect. The 'tired photons' hypothesis is in direct contrast to the Doppler hypothesis. In fact, only one of these can be true.

The prevalent view is in favor of Doppler effect for the shifting of the frequency. However, even though this is the dominant view, it does not apply to all red-shifted objects (for e.g. the Quasar redshift is still an iffy...)

If the 'tired photons' view was true, there would be a 'smearing' effect - from the inelastic collisions of photons with interstellar medium. As of now, no such effect is observed.

This is simple, explains the data, and it's the core of the current standard cosmological model.

Some people seem to think that standard cosmology is based on expanding space and that this is different from stellar motion, but they are actually the same in GR. (There's no generally covariant way to distinguish them; they are, more or less, the same thing in different coordinate systems.) I just wrote this up in more detail in another answer.

A light source moving at right angles to an observer always appears red-shifted, implying the universe is in a circular motion, NOT expanding.

I'm not sure what this means, but none of the possibilities work.

(Also, all of these models violate isotropy.)

The star's gravity or the gravity of a galaxy may lengthen the wavelength of the starlight.

This does happen, but it doesn't explain why more distant objects are more redshifted. Even after taking it into account (which astronomers do), there's a remaining redshift that can't be explained in any way other than expansion (or God deceiving us).

The light waves lose energy while traveling across space, reddening its light.

This is called tired light and it was given serious consideration in the past. It always had the problem that there was no obvious physical mechanism for it. What ultimately killed it was evidence (from supernova light curves) that the processes seen via redshifted light are also slowed down in time by the same factor. This requires that either the supernovas' clocks are inherently slower (violating the cosmological principle) or the universe is "buffering up" increasing amounts of the light signal so that it can be delivered more slowly. This happens automatically when the distance between the supernova and us is growing with time. There's no plausible way it could happen otherwise.

the slowing of light

In the standard cosmology, in the usual cosmological coordinates, the speed of light is inversely proportional to the scale factor, i.e. it "goes down" as the universe expands. You could develop this into a theory of slowing light that fit all of the observations. But it wouldn't be an alternative to universal expansion; it would be universal expansion, but described in different words.

Any slow-light model that isn't just the standard cosmology in disguise would probably be easy to rule out experimentally.

I'm not sure what this means but it sounds similar to the merry-go-round, and if so it has the same problem.

Photons don't loose energy but collide with one another making gaps in the waveform over space,By Fourier Analysis these gaps would give a red shift. The further the light travels the more photon collisions there would be so the more red shift. This is not the same as tired light. The microwave back ground could be caused by photons of reduced energy which have been knocked out of the original light stream. I am not disputing that the Doppler shift can occur only that there is also the mechanism of photon collisions as well. There could be both Doppler Effect and photon collisions causing the red shift.

Cosmological redshift is an implication of negative curvature of a large scale vacuum. Mathematical theory of behavior of a light in Loabachevskian (hyperbolic) spaces was developed in a series of papers by G. von Brzeski and V.von Brzeski. Interested reader should go to researchgate web page where all papers on electromagnetic phenomena in Lobachevskian space are posted.

Not the answer you're looking for? Browse other questions tagged cosmology gravitational-redshift or ask your own question.

5
Does observed red shift indicate expanding universe?
2
Can anything other than recessional motion cause a redshift?
3
Red shift and expansion of universe
57
What if the universe is rotating as a whole?
11
Differentiating the gravitational redshift and the cosmological redshift?
4
Redshift of distant galaxies: why not a doppler effect?
1
Could these hypothetical very long distance properties of light offer alternatives to an expanding universe or a finite number of galaxies?
0
Tired light red shift hypothesis