The following Q&A about reversible computing is available here. It has listed a number of practical scenarios where a reversible circuit can still be dissipating heat. Let's assume that none of these is present in the following discussion.

Okay, then can reversible computing really make the energy dissipation of a computation be an arbitrarily small non-zero amount?

Only insofar as the computer can be arbitrarily well isolated from unwanted interactions, errors, and energy leakage (which are all really different ways of describing the same thing). Even a superconducting reversible computer with the best possible thermal insulation still faces the possibility of being struck by a high-energy cosmic ray - or an uncharted asteroid (an asteroid can be thought of as an extremely high-energy cosmic ray). Even if you bury the computer at the center of a cold planet, a black hole could always swing through the solar system and swallow it up. Objects like rouge black holes passing through can be viewed as merely a very extreme variety of thermal noise, one which illustrates the impossibility of ever getting rid of unwanted interactions completely. Even with total control over the state of the universe, there will always a small residual rate of quantum tunneling out of any non-equilibrium state space. However, it might be possible that as the universe grows and cools, we may be able to compute with ever-smaller lower-bounds on the rate of energy dissipation per operation, and thus perform infinitely many computations with only finite energy, a scenario explored by [Dyson '79], and objected to by [Krauss & Starkman '99]. [Dyson '01] thinks the argument may hinge on whether a true analog basis for computing is possible. However, even if Dyson is correct in the long run, if one chooses a particular era (the next billion years, say), it is not clear whether we could ever control enough of the environment to achieve any desired nonzero rate of dissipation, however small. But, despite all these caveats, it may yet be possible to set up reversible computations that dissipate such amazingly tiny amounts of energy that the dissipation is not a barrier to anything that we might wish to do with them - I call such computations ballistic. We are a long way from achieving ballistic computation, but we do not yet know of any fundamental reasons that forbid it from ever being technically possible.

Let me draw a quantum circuit as follows. 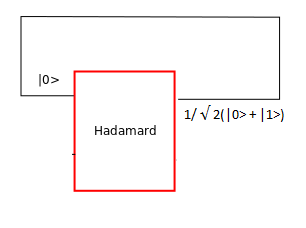 In this circuit, the output of a Hadamard gate is fed as it's input. Let's assume in the first clock cycle the input is $|0\rangle$. Now at the output the Shannon entropy increases.

My question is: can this scenario be considered as erasure of information as referred to in Landauer's principle?

Can this scenario be considered as erasure of information as referred to in Landauer's principle?

No. The reason is that the whole process is reversible and Landauer's principle specifically needs an irreversible step - otherwise no "erasure" can have taken place.

Where's the problem? It's here: The state

has also zero Shannon entropy. Why? Because it's a pure state. The corresponding density matrix

is rank one (eigenvector is the state with eigenvalue 1) Your error in thinking is that a superposition is dependent on your choice of basis, it has nothing to do with entropy.

The Hadamard gate is a unitary matrix, as such, it implements a unitary evolution and must therefore send pure states to pure states. In whatever basis you consider your pure state to be in, the result will also be a pure state (otherwise, the process would not be reversible).

Not the answer you're looking for? Browse other questions tagged quantum-mechanics thermodynamics quantum-information entropy reversibility or ask your own question.

10
Can quantum vacuum carry entropy?
5
Why does slow compression of a gas doesn't change its entropy to increase?
2
Does heat death of the universe necessarily imply an inability to perform computation?
3
Maximally mixed state as input of a quantum circuit
8
Again: why do quantum computations need to be reversible?
1
Quantum teleportation reversible?
3
Partial trace - experimental implementation and calculation
1
Von Neumann entropy vs Shannon entropy for a quantum state vector