What does the colour of a light bulb depend on?

There are light bulbs of different colors available (red, green, yellow, white, etc). What does the color depend on? Is it on the temperature of the filament?

I am going to answer this on the assumption you are talking about an incandescent lamp.

A tungsten filament is heated by the current flowing through it, and starts to behave like a black body radiator. Now a tungsten filament is not a perfect black body: the emissivity is a function of wavelength and has been characterized (see https://dspace.mit.edu/bitstream/handle/1721.1/4755/RLE-TR-328-04734719.pdf?sequence=1). From that paper, figure 29 is reproduced here: 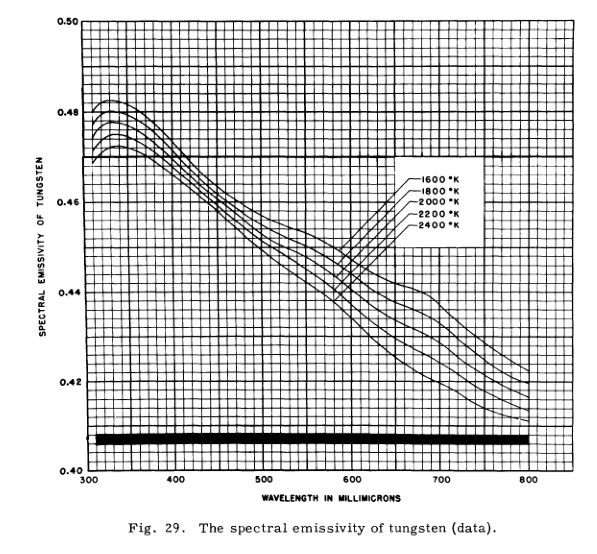 This shows there is a weak relationship between emissivity and temperature - and that emissivity at shorter wavelengths is slightly higher (making the light "more blue"). Do pay attention to the vertical scale - variation is from roughly 0.42 to 0.48, which is why I call it a "weak" relationship.

This is a very small effect compared to the actual spectral characteristics due to the over all black body spectrum which is a strong function of temperature as shown in the following figure ("Black body" by Darth Kule - Own work. Licensed under Public domain via Wikimedia Commons - http://commons.wikimedia.org/wiki/File:Black_body.svg#mediaviewer/File:Black_body.svg): 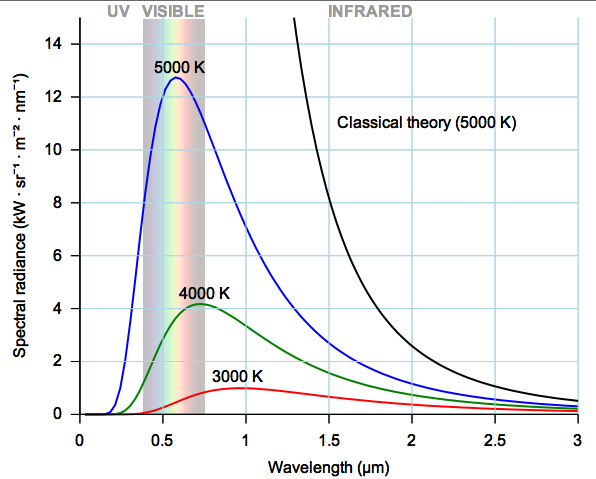 The equation represented here is Planck's Law - it represents a victory for quantum mechanics because it explains why there is no UV catastrophe, although according to that link it was actually Einstein, not Planck, who made the connection...:

$$B_\lambda(T)=\frac{2hc^2}{\lambda^5}\frac{1}{e^{hc/\lambda k_B T}-1}$$ Now the melting point of tungsten is just below 3700 K, so you can see that the spectrum will be heavily biased towards the red - which is why you need to make a "white balance correction" when you take an indoor photograph with incandescent light (your camera usually does this automatically).

From this red-biased starting point you can now select certain wavelengths by filtering out certain components. An example of this is the GE Reveal light - when you look at the light bulb itself it has a blue-ish tint, and the light that it gives off looks "very white" - because it has filtered some of the yellow light to give a spectrum that looks more like sunlight (the surface of the sun is much hotter than a tungsten filament and gives off what we usually consider "white" light): 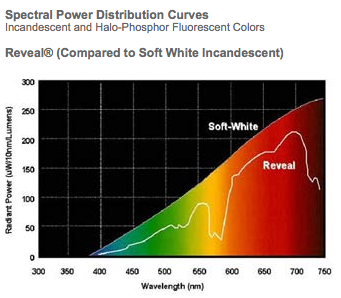 Similarly, you can create any color of light bulb by filtering out the colors you don't want. This filtering is very inefficient - you remove light from certain wavelengths which reduces the over all power of the light.

Fluorescent tubes typically use a different mechanism to create color. The gas inside the tube typically emits ultraviolet light, and phosphors on the inside of the tube convert this energy into longer wavelengths. Mixing the phosphors allows almost any spectrum (although the spectrum often has significant peaks, so that not all wavelengths are represented. This means that while the light may appear "white", it may have a poor color rendering index).

If it is incandescent, then temperature to some extent, but mostly the light of the wrong color gets filtered out by the colored glass bulb. If it is something like electric discharge lamps, then it is the gas used (eg sodium vapor) or the phosphors coating the inside of the tube converting UV to visible light/color (eg mercury vapor UV emissions). With LED lights it is either near UV being down converted by a phosphor, or the emission is directly tuned to be at a specific wavelength (color). That's one reason why colored LEDs are so efficient - nothing has to be filtered out.

For starters, even though you don't say it explicitly, I'm going to assume you're talking about incandescent light bulbs (since you mention filaments in your question). There are many other types of light bulbs, such as compact fluorescent lamp (CFL) or light-emiting diodes (LED). Each of these different types work somewhat differently, and as a result, the colors produced depend on slightly different things.

In lights like discharge lamps, etc, however, the materials used matter much more, because the excitations (and subsequent falls back to ground state) of the electrons release discrete energies/frequencies of light, which is very characteristic of the material. For example, sodium discharge lamps have a very characteristic orange/yellow glow, because sodium dominantly emits photons at the frequency of yellow light.

LEDs are made by "doping" semiconductors with certain elements, so that the electron excitations (and falls back to ground state) release specific frequencies of light as well. Hence blue LEDs are doped differently than red LEDs, etc.

Not the answer you're looking for? Browse other questions tagged visible-light temperature or ask your own question.

8
What are colors?
4
What is the sun's spectral series?
3
Will changing the color of the light source change the apparent brightness on a traffic light?
1
Is the yellow we perceive when our eyes are hit by red and green light at the same time the same yellow that is at the yellow frequency/wavelength?
2
Is there such a material that only emits, or “sends out” the same color light that was “taken in” (absorbed)?
0
Yellow color, but not really - does it reflect pure yellow light
8
Why does the additive color model use red, green and blue instead of yellow, green and violet?