Is it a postulate or a well proven fact that speed of light remains constant w.r.t any observer?

We usually heard that speed of light in vacuum $c$ remains same no matter how observer is moving?

I am wondering whether is it taken as a postulate or a proven phenomenon that $c$ is constant irrespective of observer's speed?

I am wondering whether is it taken as a postulate or a proven phenomenon that c is constant irrespective of observer's speed?

Einstein took it as a postulate in his 1905 paper on special relativity. From it, he proved various things about space and time.

The frame-independence of $c$ is also experimentally supported. This is what the Michelson-Morley experiment showed (although it was not interpreted correctly until much later).

You can also take other postulates for special relativity, describing the symmetry properties of space and time. In this case the constancy of $c$ becomes a theorem rather than an axiom. From a modern point of view, this approach makes more sense than Einstein's 1905 axiomatization, which puts light in a special role and defines $c$ as the speed of light. Nowadays we know that light is just one of several fields, and $c$ is not the speed of light but rather a conversion factor between space and time units. The symmetry approach goes back to W.v.Ignatowsky, Phys. Zeits. 11 (1911) 972, and can be found in various other modern presentations, such as this one or my own.

By using orthogonal optical resonators, laboratory tests concerning verifying the isotropy of c have come a long way. As quoted from http://journals.aps.org/prd/abstract/10.1103/PhysRevD.80.105011

"An analysis of data recorded over the course of one year sets a limit on an anisotropy of the speed of light of $\Delta c/c \sim 10^{-17}.$ This constitutes the most accurate laboratory test of the isotropy of c to date and allows to constrain parameters of a Lorentz violating extension of the standard model of particle physics down to a level of $ 10^{-17}.$."

This method therefore provides a more refined repeat of the Michelson–Morley experiment. It compares the resonance frequencies of two orthogonal optical resonators that are implemented in a single block of fused silica and are rotated continuously on a precision air bearing turntable. The experiment in turn provides an extremely accurate laboratory testing of the isotropy of c. 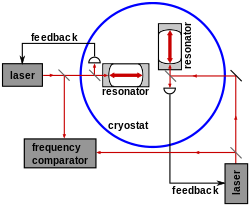 However, this phenomenon that the measure of c is constant does confuse many people.

Once again we send a burst of light from the (S)ource to the (D)estination, and thus in turn the light passes through the tube from the rear end to the front end. To those located on the Stationary frame of reference, the speed of that burst of light across space is 300,000 km/s just as expected. Thus the light is traveling 40,000 km/s faster than the tube. It therefore takes approximately 3.73 sec. for the light to pass through the tube ( 150,000 km's / 40,000 km/s ). However, on board the tube the clocks are ticking at half speed, thus these clocks would only measure a time period of 1.866 sec ( 3.73 * 0.5 ).

Even if the light travels in the opposite direction that the tube is traveling, once again, due to the change of the measurement instruments, a 1 second time period is measured as being the time required for the light to pass through the tube. This occurs even though to an external observer, that is located in the Stationary Frame of Reference, it only took 0.268 of a second for the light to pass through the tube from front to rear. ( 0.268 sec. * 0.5 time dilation ) + ( +0.866 sec. clock offset ) = 1 sec.

Thus it is obvious that as the light passes through the tube, it does not change its speed of 300,000 km/s. However, to those on board the moving tube, despite being in motion, they too still measure the speed of the light as 300,000 km/s.

It is a well-substantiated observed phenomenon. Science deals only with provisional truths, but this hypothesis has undergone (and passed) immense amounts of scrupulous experimentation and mathematical formulation.

In a Neo-Lorentzian interpretation, physics works differently in all reference frames except for one single, undetectable, privileged reference frame and everything else that occurs that does not comport with this reference frame is, for all intents and purposes, illusory. This view has been largely discredited as the contrary, Special Relativity interpretation, has been observationally supported, with no falsification thus far, and the isotropy of the universe (physics works at all reference frames irregardless of orientation or velocity) appears to be correct. Though the Neo-Lorentzian view is essentially unfalsifiable, even theories with predictive capability (which is essentially equal to that of SR) but with added components that are not required to explain the facts are more likely to be wrong.

Not the answer you're looking for? Browse other questions tagged special-relativity speed-of-light reference-frames observers or ask your own question.