How many atoms exist within a continuum body?

Materials, such as solids, liquids and gases, are composed of molecules separated by "empty" space. On a microscopic scale, materials have cracks and discontinuities. However, certain physical phenomena can be modelled assuming the materials exist as a continuum, meaning the matter in the body is continuously distributed and fills the entire region of space it occupies. 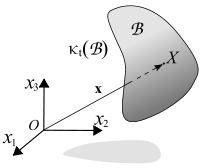 How many atoms exist within a continuum body?

The number of atoms (or molecules) in a body is given by Avogadro's constant, or $6.022 \times 10^{23}$ per mole. A mole is the amount of material, in grams, equal to the atomic or molecular mass of the substance in question.

With those kind of numbers, normal bodies can easily be considered to be continuous, as the number of atoms in them is near enough to infinite for everyday practical purposes.

The simple answer to find the average number of atoms/molecules per unit volume is....

Not the answer you're looking for? Browse other questions tagged atomic-physics crystals continuum-mechanics discrete homework-and-exercises or ask your own question.

54
If photon energies are continuous and atomic energy levels are discrete, how can atoms absorb photons?
2
how laser interact with atoms?
1
Where does the energy within atoms come from?
2
How many atoms are there in our solar system?
54
How many atoms does it take for us to perceive colour?
2
Can muonic atoms exist?