The Difference Between voltage and current

I know that this question has been asked many times before, and I have read over several of the threads asking this question, but they do not include the gripe I have with my problem of understanding the difference.

As I understand it, voltage, V, (also called electromotive force, EMF) is essentially the "wanting" of electrons to push away from the negative terminal and to want to go to the positive terminal to eventually balance out the charges and create a net neutral charge. This is done through a conductor, like a wire, between the two terminals. The movement of electrons caused by the attraction of the charge from the negative terminal to positive is the current, I.

Now, as my textbook defines it, voltage is the amount of energy, E, per unit charge, Q. Current is defined as the amount of charge, Q, passing through a point in the circuit in a unit time, t. Current is determined by voltage, as is also stated in Ohm's Law (i.e. if voltage rises/falls, current rises/falls, if resistance remains constant). So then, if energy is lost in a resistor, why does current through the resistor not change? Shouldn't the current go down if energy is lost? Or is it that energy is determined by something within the voltage source (e.g. battery) that is not related to charge?

What you could say is "if energy is lost in a resistor, then why doesn't the velocity of the charged particles increase, as per Work-Energy theorem?". So your question should really go something like "Why doesnt current which is $Q/t$ increase if the velocity will increase after voltage drops"?

The answer to this is that we assume all potential energy lost, is again lost due to inner collisions with other atoms, and that's why materials heat up! Also, this implies a steady current because the drift velocity will not be changing.

It can be shown that $F\Delta x= \Delta KE$ this means that a force acting on some distance will produce a change in kinetic energy. You can imagine an electric field where the work done by it is simply $W= qE\Delta x$. By the way notice that if I were to divide that expression by the charge $q$ I would obtain the voltage across the thing i'm concerned with. Namely $V=E\Delta x$.

So in summary, if I do some work, then I have some change in kinetic energy. If there is a voltage drop, it follows that positive work was done and kinetic energy increased, which means a velocity increment.

Across a resistor there is a voltage drop. So why isn't it that charged particles are going faster and then I can measure a current increase? Well that's due to the explanation I gave above my edit portion. Namely, that all that increase in kinetic energy is absorbed due to collisions with the neighboring atoms.

By the way, if you're curious enough to visit this website, I suggest you look up a video on Work-Energy theorem on youtube. This concept is pretty straightforward and I'm sure you can understand it.

ahh, i made this very same question when learning about electricity in high-school

The answer (the physics teacher was good) was this:

Indeed a resistor (in a sense) alters the passage of electrons (thus current) through it. For example through collisions of electrons with the (micro-)structure of the resistor material, heat is generated (thus energy changes), electrons are scattered etc etc..

BUT the average speed of the whole electron cloud (which is the current) is not altered in this way.

Note that heat was mentioned, and indeed the resistance of a resistor material is altered depending on temperature (and other parameters).

What the resistor indeed does is to "slow down" the current. The more resistors you put the smaller the current (the current drops). If there were no resistor you would not have any voltage drop and assuming the wire does not have resistance, you will have a short circuit (maximum current flow). The circuit equations for a resistor already take into account that the current will be slowed down by it and that there will be a drop of voltage across (ohm's law), so no extra reductions will need to be considered.So, you are basically right, unless there is some part of your question that I do not understand.

Simple answer is that charge is a quantity that is conserved.

Think of electrons as balls that go very close to each other, if in front of some electrons there is resistance, which takes their kinetic energy (slow down), then the rear ones will slow down, so the current (the number of charges over time) on the whole circuit is the same. 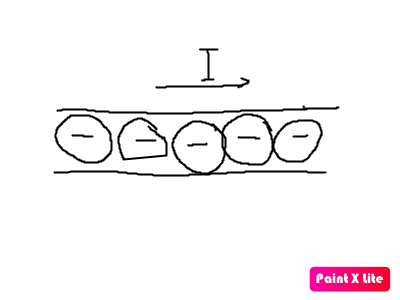 Your imaginary situation is possible! but ...First its Good for beginners to think of voltage as pressure pushing electric fluid and the fluid is nearly incompressible. Later come back to the energy definition of voltage which is more advanced. Now your situation is like a bar charged at one end which will have voltage there. The electrons get pushed away and spread picking up some kinetic energy and losing it as friction heating up the bar and slowing down and finally at equilibrium the bar still has a spread out charge and the initial voltage at one end has dropped down to until no voltage difference spatially. That started like an electrostatic situation (or capacitor) with an accumulation compression of charge which is hard to get needs very high voltages! A normal circuit at lower voltage has a battery which keeps pushing at one end and sucking at the other maintaining voltage drop. And the electrons after they get slowed down by friction get pushed again by the ones behind in a kind of knock on situation. So the voltage pressure gradually reduces along bar but is kept constant in time. Current keeps flowing and energy gets dissipated as heat in the resistance of the bar meanwhile the battery loses energy.

2
Exact Relation between voltage and current
0
Why is the potential difference across a component not constant?

42
I don't understand what we really mean by voltage drop
2
Why, microscopically, is the voltage drop across a resistor affected by the current through it?
0
Emf must be greater than it is supposed to be
1
Why does battery generate less terminal voltage difference when current flows?
1
Current flowing inside battery/voltage source
0
Relationship between Electric Fields, Potential Difference and Resistance in Circuits
19
Why doesn't the voltage increase when batteries are connected in parallel?
2
Voltage and Potential in a battery