My question now is, what if the interval of the Schrödinger equation becomes $[0, 2\pi]$, i.e. what if there are multiple turning points? Is there an analogue approximation formula?

I am not aware of any analogous approximation formula for more than two turning points (maybe someone out there does), and would risk saying that you would have to explicitly work out the WKB-approximate wave function as well as the connection formulas. The reference I can recommend for a nice introduction to the subject would be David J. Griffiths' Introduction to Quantum Mechanics, 2nd edition, chapter 8.

For a given potential, then, one has to carefully analyse the neighbourhoods of classical turning points (points $x$ for which $E=V(x)$) and match WKB-approximate wave functions on both sides through an intermediate 'patching' wave function, given as a linear combination of Airy functions (Airy functions arise as a consequence of linearising the potential in the turning point's vicinity). The matching is given by the so-called 'connection formulas'. These are obtained from asymptotic forms of the Airy functions, which are valid if one demands to be sufficiently away from the turning point -- so that the WKB holds -- but not that far away -- such that the linearisation of the potential is still a good approximation (more details can be found in the book).

However, matters simplify if you have a symmetric potential. In Problem 8.15 of the given chapter, the case of a symmetric double well is considered, meaning an even potential which qualitatively looks like this: 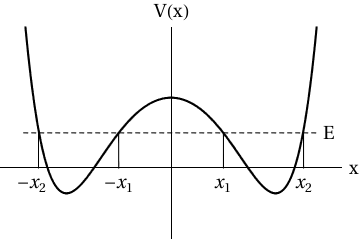 I tried numerically solving the Schrödinger equation for the same potential, determining the eigenvalues graphically, i.e. using Mathematica's Manipulate and scanning for appropriate behaviour of the solutions. From this procedure I got $E = -5.80,-5.79,+1.97,+2.10,+8.13,+9.23$ for the $10\cos(2x)$ potential with walls at $x=\pm \pi$ (these solutions are alternatively even and odd, respectively). Since there is only a finite number of eigenvalues, I cannot compare with the commented E-03 precision for large eigenvalues, but would venture saying that the WKB provides nice estimates at a first glance.

Not the answer you're looking for? Browse other questions tagged schroedinger-equation perturbation-theory eigenvalue approximations semiclassical or ask your own question.

1
How to apply the WKB approximation in this case?
7
Finding the energy eigenvalues of Hydrogen using WKB approach
3
WKB Approximation on an linear + harmonic potential
1
Connection formulas: Why do we assume asymptotic behavior of the Airy functions?
1
WKB method to calculate the ground eigenvalue of a Quartic Potential
1
Wavefunction of a particle on a ring ($E > V$) using WKB method