Do wind turbines convert the kinetic energy of air?

It is often said that wind turbines convert the kinetic energy of the wind into electricity. But in respect to horizontal wind turbines with airfoil shaped blades this is imho not the case.

Unlike traditional windmills and most vertical axis wind turbines, horizontal wind turbines with airfoil blades do not try to "catch the wind" (try to transfer the kinetic energy of the air onto the blades) but use lift to induce rotation.

What is really happening?

The principle of conservation of energy is your friend.

That energy has to come from somewhere.

The other energy in the system is the kinetic energy of the wind.

The lift generated by the wind over the blade moves the blade around. That takes energy from the wind to achieve. The energy is delivered into the generator.

There's a comprehensive book called "Wind Energy - The Facts", and the technology chapter covers the specific aerodynamics. Your closest decent library should have a copy.

First, it's not only drag that slows down the air, every force has to be matched by an equal and opposite force including lift. Second, friction is not the sole cause of drag, indeed there's drag on an airfoil in an inviscid fluid due to pressure.

So why we need sophisticated airfoil design when traditional windmills can work and how modern wind turbines work? 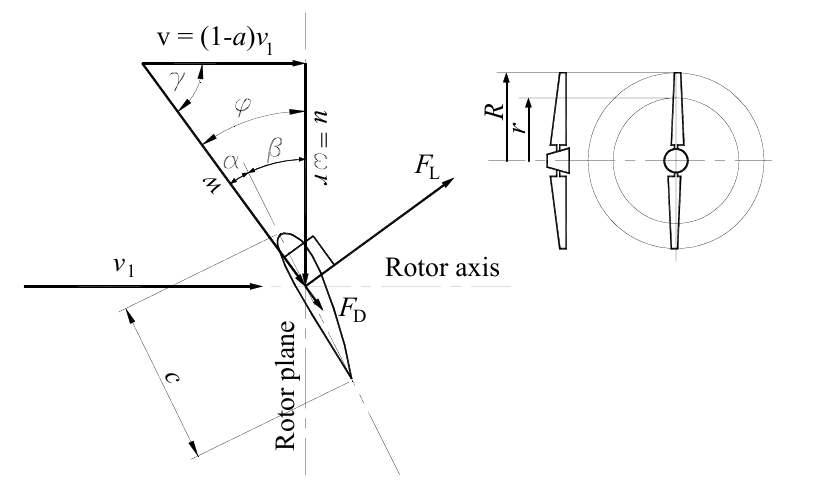 The closer to the tip of the blade you get, the faster the blade is moving through the air and so the greater the apparent wind angle is. To compensate for this they twist the blade. 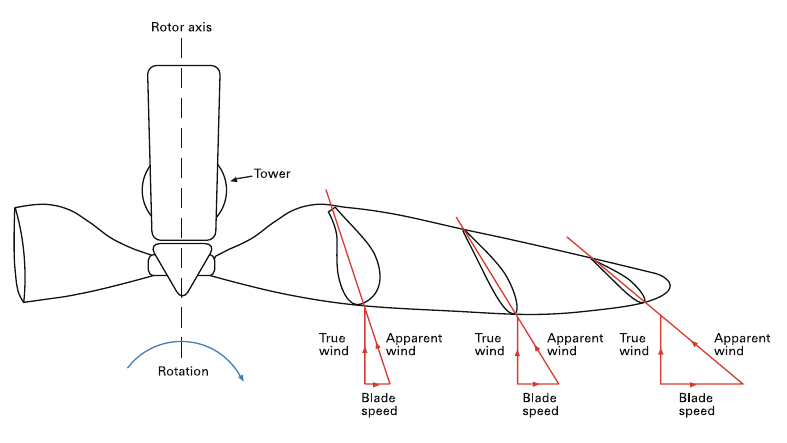 The planform shape is chosen to give the blade an approximately constant slowing effect on the wind over the whole rotor disc (i.e. the tip slows the wind to the same degree as the centre or root of the blade). This ensures that none of the air leaves the turbine too slowly (causing turbulence), yet none is allowed to pass through too fast (which would represent wasted energy).

Because the tip of the blade is moving faster than the root, it passes through more volume of air, hence must generate a greater lift force to slow that air down enough. Fortunately, lift increases with the square of speed so its greater speed more than allows for that. In reality the blade can be narrower close to the tip than near the root and still generate enough lift. The optimum tapering of the blade planform as it goes outboard can be calculated; roughly speaking the chord should be inverse to the radius. 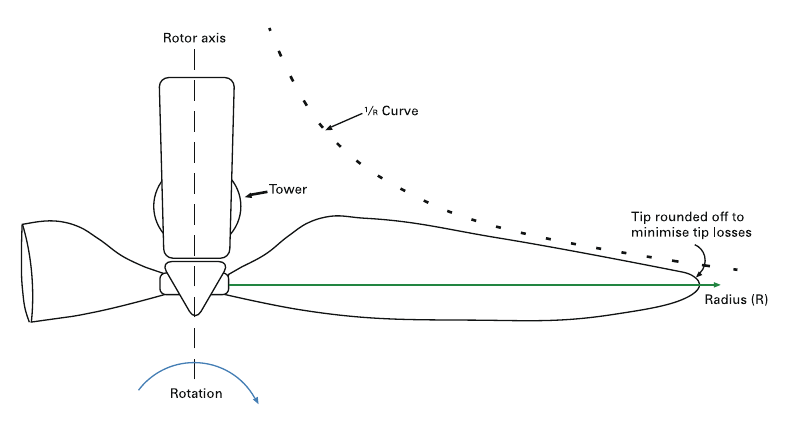 In reality a fairly linear taper is sufficiently close to the optimum for most designs, structurally superior and easier to build than the optimum shape.

So these airfoils allow us to generate lift even at high rotational velocities, but why not operate the turbine at low speeds? Because power is speed $\times$ force and to obtain the same power we need to operate them at higher forces which increases the load on the structure necessitating costly materials. And to increase the lift we need more chord length which increase weight of the blades, increasing the load on the structure again.

Furthermore remember that the equal and opposite force is exerted on the fluid. As the blades generates torque, they would have an equal but opposite effect on the air. So the air downstream would have a swirl. That swirl represents lost power so reduces the available power that can be extracted from the wind. Lower rotational speed requires higher torque for the same power output, so lower blade speed results in higher wake swirl losses. 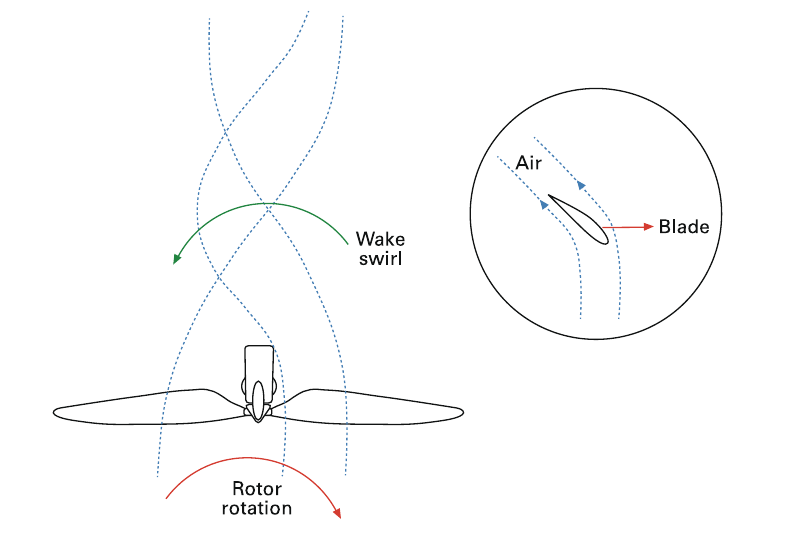 Not the answer you're looking for? Browse other questions tagged fluid-dynamics drag renewable-energy lift or ask your own question.

0
How does wind cause a wind turbine to spin?
1
How is the kinetic energy of the wind transferred onto a lift based wind turbine?

4
Wind Turbine Impact
8
Optimal speed for the water wheel
1
How is the kinetic energy of the wind transferred onto a lift based wind turbine?
1
Can lift contradict conservation of energy?
2
Can we reduce a hurricane's power using wind turbines?
1
Is there a temperature drop at the rotor plane of a wind turbine?
0
Changing number of wind turbine blades
3
How does a helicoper auto-rotate? The force of the air pushing on all blades would equal out. Wouldn't it?