A problem regarding the Elitzur-Vaidman bomb tester

After being emitted, the photon 'probability' wave will both pass through the first 50% reflecting mirror (take the lower-route) and be reflected (take the upper-route). Both waves are reflected/transmitted again in the second 50% reflecting mirror (upper-right), so both detectors receive 50% of the 'lower' and 'upper' wave. The interferometer is aligned so the interference of both waves is destructive for detector C and constructive for detector D, when no bomb is placed. Then all photons will be detected by D and none by C. Now a bomb is placed:

If the bomb is a dud:

The situation is as described above, without a bomb. Detector C will not detect photons.

If the bomb is usable:

If the photon particle takes the lower route:

Because the bomb is usable, the photon is absorbed and triggers the bomb, which explodes.

If the photon particle takes the upper route:

The bomb blocks the 'lower' wave, so there is no interference effect anymore at the second 50% reflecting mirror. Now there is a 50% chance of detecting the photon in detector C and D (but not both). 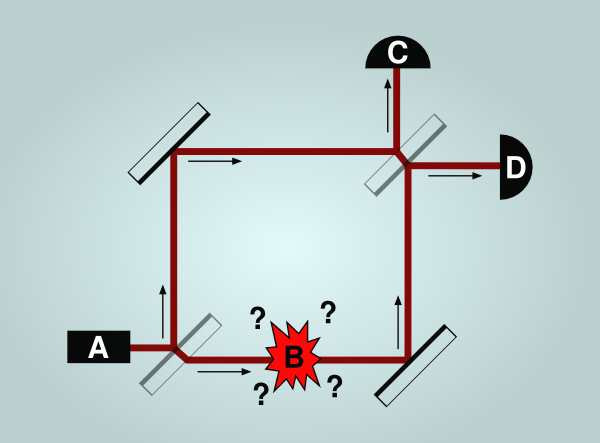 Now to the question:

The part I do not understand is this one

If the photon particle takes the upper route:

The bomb blocks the 'lower' wave, so there is no interference effect anymore at the second 50% reflecting mirror. Now there is a 50% chance of detecting the photon in detector C and D (but not both).

I do not understand that from where did the lower wave even emerge?

The semantics is a bit confusing. The article talks about "if the photon particle takes the upper route" and then talks about the bomb blocking the lower wave". This is confusing if you're not used to the underlying principles unfortunately.

What they mean is that the photon's probability-amplitude wave, referred to in the very first paragraph, always splits at the first beam-splitter A into an upper and a lower part.

At the second beam-splitter (the one up in the top right of the picture) the upper and lower parts of the amplitude wave are re-combined and depending on if both parts are re-combined or just the upper part, the resulting detector probabilities at C and D are different, thus allowing you to infer if the lower path was blocked (properly calibrated, only D will click if the paths are unobstructed, otherwise both C and D can click).

When they start to discuss the interpretation of this result, they fall back to the fact that there was only one photon to start with, and there is only one photon the experiment ends with (a single click in either detector C or D). Thus the conclusion that this single photon obviously had to take the upper path if there is a bomb in the lower path, and you detect a photon in C or D and are not blown to pieces! (and therefore you seemingly do an interaction-free measurement, at least for the case of a click in C - a click in D gives you no extra information)

To re-iterate - the analysis and interpretation is two different things. Often it is less confusing (and maybe enough) to just analyze the probability-amplitude propagation and don't think so much about what happens to the particle inside the system. But obviously this experiment was designed to force you to have to consider this, which makes it a nice setup I think!

Not the answer you're looking for? Browse other questions tagged interactions interferometry or ask your own question.

9
Michelson interferometry - is a compensator plate necessary?
1
Interference experiment and entanglement with apparatus
0
Physical problem with logarithmic potential
0
Why sample is placed after the interferometer in FTIR?
0
A common misunderstanding regarding which path information in a double slit and Mach-Zehnder interferometer?
1
What observable(s) does a mirror operate on?