What mechanism is responsible for the creation of these dunes on Comet 67P/Churyumov-Gerasimenko?

What mechanism is responsible for the creation of these dunes on Comet 67P/Churyumov-Gerasimenko? 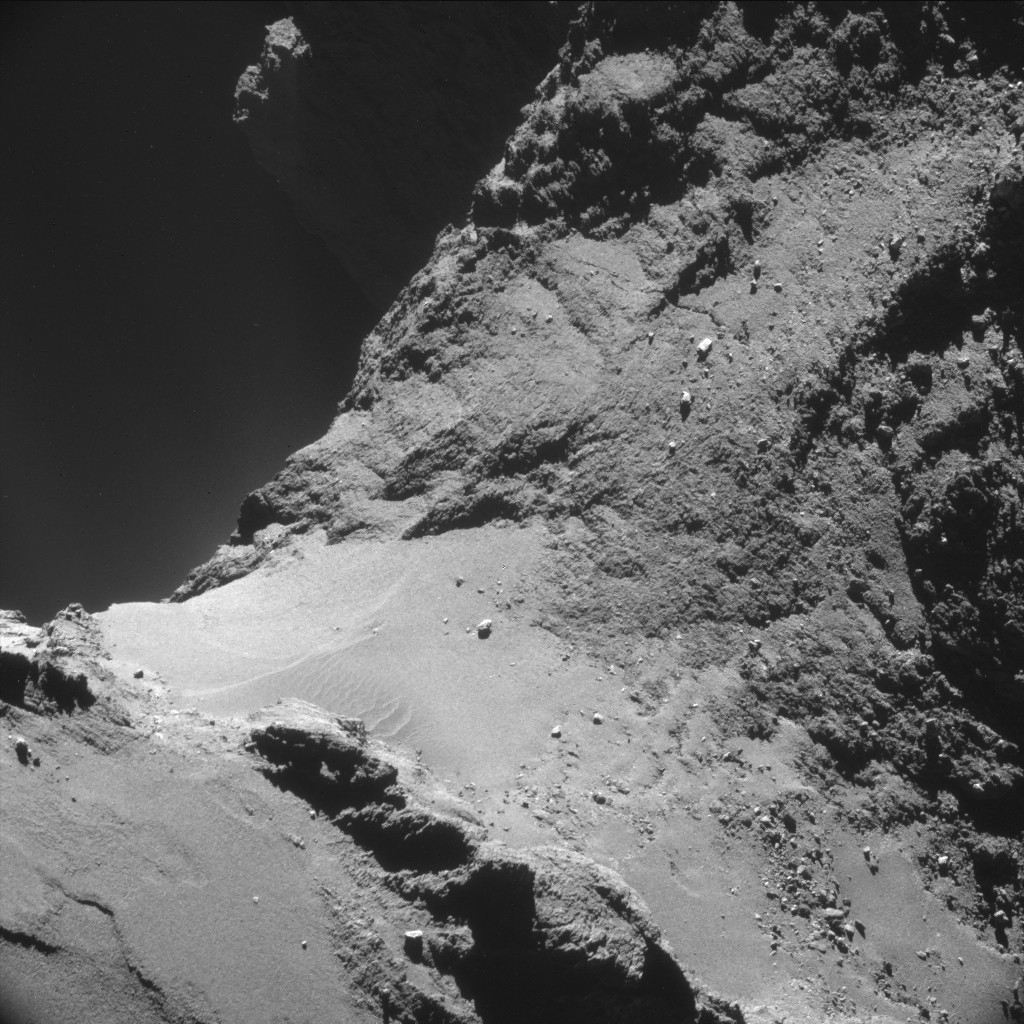 So the scale of the dunes is on the order of tens of meters along the crest. And each crest are probably just a few meters apart.

As the comet approaches the Sun, it starts to melt. It means that what was once rock and ice is exposed to very high temperatures and forms a liquid which flows over and behind the comet. 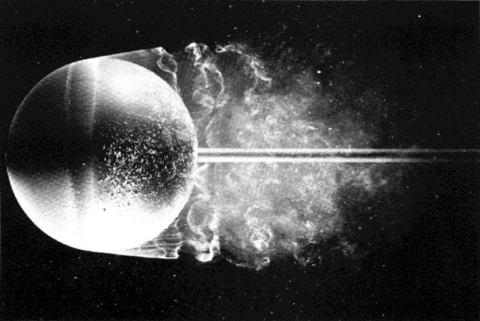 The above is a picture of fluid boundary layer on a sphere.

Notice how the fluid motion is visible, and my guess is that the fluid drags along with it, some of the solid, but easily movable part of the comet (dust maybe), thereby displacing it.

Wild unsubstantiated guess: Could it be flow of the sand down an incline, more like a glacier than sand dunes. Maybe the flow gets a boost from tidal forces flexing the comet whenever it passes near a massive body. Some of the patterns in the sand in the lower left corner look like what happens when sand slips down a critical incline like on an over ambitious sand castle. Of course it is hard to tell which way is actually down in this picture.

Did a little internet search. Comet 67P is kind of dumbell shaped. Seems like the valley we looking down into is the "neck" around the middle of the comet, so the may be no down on the valley floor where the dunes are. However, being the thin neck between two massive bulges would make the valley floor extra prone to stresses from tidal forces acting differentially on the 2 bulges. Could the dunes be the result of the core of the comet just flexing under the sand in place? The patterns on the side of the valley in the lower left would be consistent with sandslides towards the valley floor.

Another possibility is that because of it's highly irregular shape, the rotation of 67P is chaotic like Hyeprion's. If that is the case then sands on the surface would experience tangential forces as the the rotation of the core changes direction. This could produce interesting patterns on the surface of the sands. However, 67P's rotation looks regular in this video. The Wikipedia article does mention changes in rotation from "sublimation induced torque" though.

It is also possible that the gases the comet gives of when near the sun do flow along the surface. So the cause of the patterns could be more like earth dunes after all.

Since there is effectively no atmosphere and thus little chance for any type of erosion, the individual "dirty sand" particles are most likely very jagged like the lunar regolith. Thus, I doubt that small distortions in the shape of the comet are to blame as these particles do not slip past each other as easily as, say, sand on Earth.

So my best guess is that the dunes are due to vibrations of the comet, either from variations in sublimation during its orbit or collisions with other orbiting bodies. If you shook the comet once and produced such dunes, I see no reason why they should change over time. Perhaps I am wrong, but those look just like what happens to partially dried mud that has been shook/vibrated. If the individual grains are jagged like lunar regolith, then it would take a significant energy input to move them. Thus, I think these dune-like features are probably very old.

There seems to be no direct evidence that the comet has any ice at all. The statement that there is ice below 8 to 10 inches of dust was based on an assumed hardness of the substrate based on how high the lander bounced after initial impact. It could be ice or it could be another hard material like rock under that dust. The other significant "evidence" given for the comet being composed of ice is the overall density of the comet. However the figure of something around 420 gm. per 1000 cu.cm. is less than half that of water ice. So while there may be a little ice, the comet seems to be much less dense than a solid object of water ice would be. This may give support to the "heretical" theory that the comet has almost no water and is composed of cosmic dust and debris which has accumulated in a low density object with some hard rocky parts and a lot of internal voids. If so, the "jets" which are now being observed are not sublimating ice but dust particles which are being attracted by the solar wind, (a stream of charged particles travelling out from the sun through space). The comet and solar wind have opposite electrical charges causing the dust to be "attracted" by the solar wind off the surface. If this is true, the comet, being a very large and dumbell shaped object may have differential charge on the "leading" lobe to the "trailing" lobe. This would mean that there is an electrical difference between the two ends of the comet, and field lines along the surface where the dust is aligning itself with the field, at the narrowest part, the "neck". The fact that the jets seem to "neck" further from the comet also suggests that the internal gravitational attraction of particles within each jet is causing them to move towards each other as the jet leaves the comet. The "aura" of bright particles all around the horizon (surface) of the comet when seen against space, suggests that there are many particles that have left the surface but are still bound to it gravitationally. Lets see what the close up images show on February 14th.

Not the answer you're looking for? Browse other questions tagged astrophysics solar-wind comets or ask your own question.

2
How can comets have sand dunes without atmospheric erosion?

8
What's the most accepted theory for Blue Stragglers These Days?
5
What is the likelihood of a long-period comet impact?
3
What is the origin and nature of the "hydrogen envelope" located on the sun side of a comet coma?
5
What interaction is responsible for the 21 cm Hydrogen line transition?
2
What is the weight of the Philae lander on the Churyumov–Gerasimenko comet compared to earth?
7
What is the limit for the size of a galaxy?
6
What is the scientific basis for comets vs. main-belt comets being composed of different materials?
1
What is the most efficient particle acceleration mechanism in space and astrophysical plasmas
1
What is the tolerance for astrophysic measurements compared to distance?