How do the flow equations relate to the actual situation?

This question might seem silly but I'll try to make it clear. It's a question (I think) about partial differential equations systems in general, but since currently I'm studying fluid mechanics I'll ask on that context.

The equations for an incompressible flow are:

Where we have to find $u_1,u_2,u_3$ the components of $\mathbf{u}$, $\rho$ and $p$. The point is: these are the equations, regardless of the flow under study. So, how does this connect to the real situation I have?

For example, in Newtonian Mechanics the equation is $\mathbf{F} = m\mathbf{a}$, but here we know the connection with the problem at hand: we plug the forces there and we solve the equation.

Now, in fluid mechanics, if I consider pipe flow, or channel flow, or flow past a sphere, or inside some complicated region $D\subset \mathbb{R}^3$ the equations are just the same. Nothing changes, there's not anything connecting the equations to the problem at hand but we might expect the solutions be quite different on each case.

In that case, since there are $4$ equations and $4$ unknowns, it seems the solutions would always have to be the same. So I ask: what connects these equations to the real situation? Is it just the boundary conditions? I believe my problem is that I don't know yet how existence and uniqueness works for partial differential equations systems.

I didn't entirely understand your question, aside from the last bit "what makes a solution of these equations unique?"

And you are absolutely right, it is the boundary and initial conditions that entirely determine the solution (which may or may not be unique, that's a very open problem for the Navier-Stokes equations).

You say that the situation is clearer in Newtonian mechanics, you just plug in the forces and you're done. However, this is also true in fluid mechanics. The momentum equation of the Navier-Stokes is really just $F = ma$. And you really just plug in your forces -- pressure gradient force, body forces (like gravity), viscous forces. Then you plug in your other forces that arise at the boundaries of the domain -- normal forces from walls, tangential forces if you have viscosity, etc..

It's really the same situation! And the boundary conditions, along with initial conditions, do determine the solution. But existence and uniqueness of the Navier-Stokes equations is something that has yet to be proven, and there is a substantial reward if you can do it.

Both boundary conditions and initial conditions matter equally when connecting the model to the real world.

Consider the flow around a cylinder that you mention. We know that the Reynolds number, $$ {\rm Re}=\frac{u L}{\nu}\tag{1} $$ can characterize laminar or turbulent flows, depending on the values in (1). Below are flows for different Reynolds numbers (values given in the image). 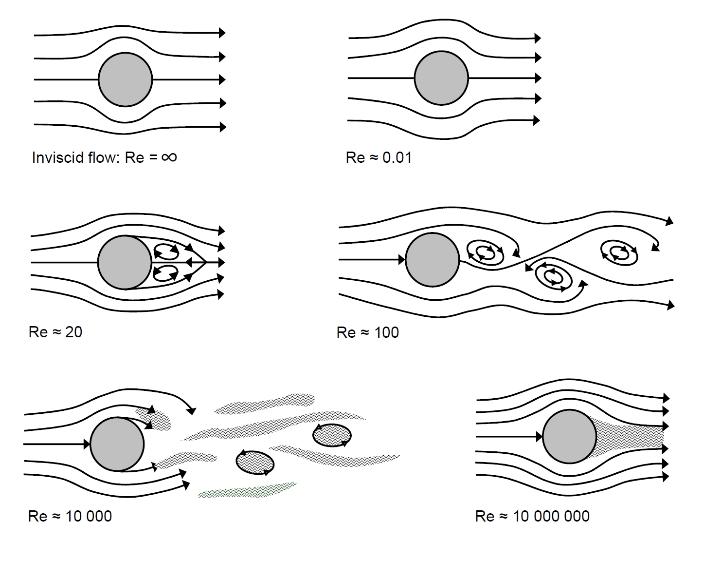 If we initialize the flow with different starting velocities, $u(x,t=0)=u_0$, (keeping the length scale $L$ and kinematic viscosity $\nu$ constant for each simulation) and maintain the steady flow with the boundary condition $u(x=0,t>0)=u_0$, then the two combined (IC + BC) generate different results for different IC+BC pairs.

I would like to add another point to the ones already mentioned by Kyle Kanos and tpg2114. When you deal with partial differential equations (PDE), you have to take into account more things than with ordinary differential equations. I will try to explain the some of the ideas behind them, but without entering into details.

To investigate whether the problem you analize has a solution (in mathematical terms it is well-posed), you have to specify in which space you are investigating it: because (mathematically) you need to have a notion of proximity (i.e. convergence) for your objects, and of magnitude (i.e. norm); and because you also have physical requirements on those objects e.g. you may want your flow to be continuous (so it can not be a general $L^p$ function, that may be not-continuous).

It turns out that a problem may be well-posed on a particular space, but not on another. For example the Naiver-Stokes equation is well-posed on some spaces (that in general have non-continuous functions), but we don't know if it is well-posed on the space of smooth (infinitely differentiable) functions (and that is the millennium problem with the big money prize that was mentioned before).

Not the answer you're looking for? Browse other questions tagged fluid-dynamics mathematical-physics navier-stokes or ask your own question.

1
Why do we use time-dependent regions in this derivation?
3
Solving flow equations with less information
4
Fluid dynamics equations, number of variables and number of equations
6
What does $(\mathbf{u}\cdot\nabla)\mathbf{u}$ mean in the Navier-Stokes equation?
0
Euler's Equations for Isentropic Flow Derivation
2
Zero velocity divergence for incompressible flow is derived from conservation of energy equation or conservation of mass equation?
2
What is the interpretation of $(\textbf{u} \cdot \nabla)\textbf{u}$ in Stokes flow?
0
How to find the reasons for change of linear momentum?