Does a force really act on a body during a collision?

Consider two bodies A(black) and B(red) having equal mass. A is moving at a constant speed towards B, which is stationary. At certain point of time, they collide elastically, $\therefore u_{A}=v_{B}$ and $v_{A}=u_{B}$ ($u$ = initial speed; $v$ = final speed) 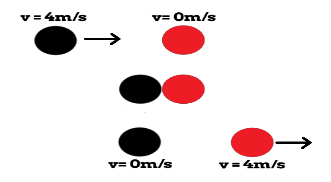 An object at rest stays at rest and an object in motion stays in motion with the same speed and in the same direction unless acted upon by an unbalanced force.

Newton's law states that force is needed to change the state of rest or motion of a body. Does a force act on B? If so, then what is the magnitude of this momentary force that sets B in motion?

I took $t=0$ while finding $a$ because I considered that velocity of B instantaneously changed from 0 to 4.

Now, as @bobie said, $E_{k}$ transfer from A to B requires time, which he demonstrated with an example. He used steel balls and calculated the speed with which $E_{k}$ propagated, i.e., the speed of sound in steel. We know that for body B to move, vibrations caused by A must reach the other end of B. But what if A and B are just single particles? Wouldn't then $E_{k}$ travel from particle A to B in an instant, as there are no intermediate particles? Would it still require some time for $E_{k}$ to propagate to the other end of B?

What acts here is called impulse

This peculiar description depends on the fact that the definition of 'Force' was modelled upon gravity, which is a force with constant acceleration and it was difficult to deal with other forces that give just velocity (and consequently momentum). You can find a thorough analysis here of the historical reasons for the newtonian definition of force, KE and work and a conceptual analysis of impulse here

If we consider a perfectly elastic collision, wouldn't the collision last for 0 seconds? meaning $a$ will be Undefined, and so will the $F$(force). – The Pragmatick

No, the collision lasts for the time KE takes to reach the other end of the ball. If you want an intuitive explanation for this just think KE cannot push, only pull. It is like a locomotive getting to the head of a train. A more rational explanation is that the mass at the far end cannot move until it gets its fair share of KE

But what if A and B are just single particles? Wouldn't then Ek travel from particle A to B in an instant, as there are no intermediate particles? Would it still require some time for Ek to propagate to the other end of B?

Also particles have a diameter. An instant is not $0$ time, as bright magus has showed in a comment. No time = no change. But time is irrelevant also here, as no force is acting, else it would be insanely great.

".. the concept of impulse which, to me, seems like a handwaving for explaining forces that appear and disappear for whatever reason." - luk32

Yes, I avoided to mention that explicitly, because it may rise some highbrows: the concept of impulse is an awkward attempt to describe mathematically the exchange of KE and momentum. It is just a fig leaf, a ruse, an artifice to fill in a gap in newtonian physics. A suggestive, subliminal message is shrewdly sent to the student adding to 'impulse' the tag 'of a force', trying to suggest that it is a sort of a force, but it has not the units.

In practice it is actually considered an instantaneous force, operating in this way an arbitrary idealization of solid bodies: the term 'instantaneous' itself is not scientific, as an 'instant' is not defined: in every-day speech it's just a short time, in various disciplines it can have [different values , see for example here: "...instantaneous force is for us the one that is destroyed in less than 30 seconds..."

Sure. An elastic collision is merely an idealized process which never occurs in nature. On the microscopic level, the two bodies are made up out of atoms. The electron shells of these atoms contain electrons. Since negative charges repel each other, the two bodys will repel each other in a smooth fashion (an inverse square force is acting).

6
Does entropy apply to Newton's First Law or does "acted upon" always require an external factor?
6
How can a car's engine move the car?
4
Force acting on a simple rigid body in space
0
Determining the force of an explosion, is it external or internal?
3
Does Newton's First Law depend on the object having mass?
1
When does a body initially at rest starts moving?
0
When I am on a moving bus and the bus stops abruptly how to cancel the extra motion due to Newtonian Law without holding steel bars in the bus?
0
Why does "net force" being zero not mean that the parachuter becomes stationary in the atmosphere?