what make the bottom portion of a wheel in rolling motion move?

As I just learn about the rolling motion which is the combination of pure translation and pure rotation. The top portion of the rolling body has the speed of double speed at the center of the object while the bottom one has no speed

Also, it can be view as the rotation that take the axis at the bottom portion 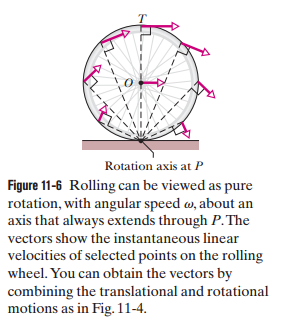 However, comparing both of those 2 explaination with the thing I see in real life, in this case, the rolling wheel, and in dynamical analysis, why the bottom having no speed can move?

For example, a rolling wheel on the street, let say the bottom of the wheel has no speed but the wheel is a rigid body and as time gone by, it move a distance so the bottom must have speed to move but as the definition the bottom have no speed which mean it is stationary so what make its displacement if there is no speed

The bottom of the wheel is a different part of it at every moment. If you follow a particular point on the wheel, you'll see it moves down and slows in forward motion until it touches the surface at zero speed and immediately starts to move up and accelerate forward again. Up to twice as fast at the top to catch up and get on the forward side again and then it descends and decelerates and the cycle repeats.

This animation from Wikipedia shows the path taken by arbitrary point on a wheel quite well:

The path is called Cycloid.

This can be answered in two different frames of reference.

If we look at this from the perspective of the moving wheel itself, then we find nothing out of the ordinary. If the wheel is actually moving at a speed, v, then in its frame there is nothing more than simple circular motion. The wheel appears to be rotating normally with the bottom moving at -v and the top moving at +v. The reason the bottom begins to accelerate in the positive direction is due to centripetal force, just like in any circular motion.

You could just as well wonder how the top of the wheel can travel twice as fast as the wheel, and still stay connected. The answer is that the double speed "top of the wheel" is just the slow "bottom of the wheel", catching up, and getting momentarily ahead...

Not the answer you're looking for? Browse other questions tagged newtonian-mechanics rotational-dynamics rigid-body-dynamics or ask your own question.

4
Rolling as pure rotation
4
Rotational work and forces such as static friction or ropes tension
2
instantaneous velocity center
0
What kind of motion is orbital revolution it most definitely cannot be pure rotation as no particle of body is fixed?
0
Rotating center of the bar
2
The dynamics of a cornering wheel