Determine which circuits are parallel and which are in series

I need to find the Equivalent Resistance across A and B. The problem is, I don't know which one's are in series and which ones are in parallel. How do I identify which ones are parallel or series?

How do I identify which ones are parallel or series?

If all of the current leaving one resistor enters another resistor, the two resistors are in series.

The resistances of series connected resistors can be added together to find the equivalent resistance of a single resistor, e.g.,

If all of the voltage across one resistor is across another resistor, the two resistors are in parallel.

The conductances of parallel connected resistors can be added together to find the equivalent conductance of a single resistor, e.g.,

In your circuit, you must piece by piece collect resistors into one equivalent resistor.

Since this is a homework type question, I can only offer you a tip and not solve it for you.

Tip - Look at this series combination for example 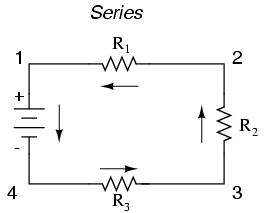 On the other hand, in a parallel connection: 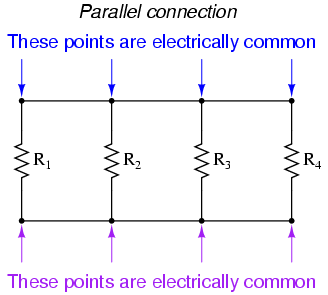 That's probably enough hint. You can now build on this :)

You want to work this out in stages. Start at the right hand side where there are three resistors clearly in series. "In series" means that the current that flows through one resistor is equal to the current flowing through the other resistor. The simplest way to identify this is to look for nodes (points where components are connected) with just two wires: those nodes connect components in series.

Figure out their equivalent resistance (1+2+3).

Now that 6 ohm resistance is parallel to the remaining 3 ohm resistor - replace these two with a single resistor.

And so it continues. every time you find a combination that either looks like a number of resistors in series, or two resistors in parallel, you replace them with their equivalent.

Perhaps this picture makes it clearer: 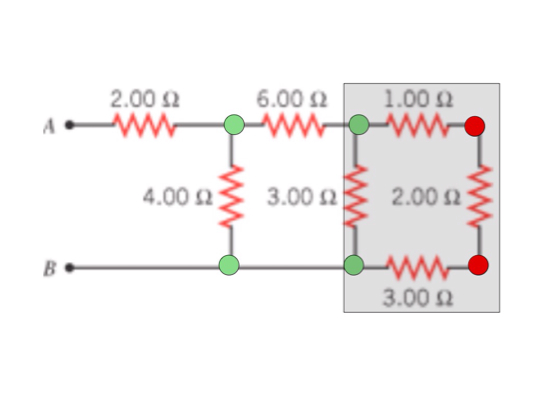 The red dots correspond to points (nodes) where one wire goes in and one wire comes out. This indicates "series" connection. The two green dots inside the gray box correspond to nodes where three wires meet: current from the 6 ohm resistor can go either into the 3 ohm or the 1 ohm in the top green circle, and currents from the two 3 ohm resistors are joined together before going to the other green circle where they combine with the 4 ohm resistor.

If you can figure out how to combine everything in the gray box into a single resistor, then you can draw that single resistor instead of the four that are inside that box (their equivalent resistance is 2 ohms - that should help you check your work) and that resistor is then in series with the 6 ohm... So the two could be replaced with an 8 ohm...

The answers are really good, but I have (as a former long-time student who has not forgotten the practicality of things) a more practical approach without considering currents or voltages, just the topology of the circuit itself:

When trying to reduce a circuit, the algorithm is as follows:

Note that some circuits can not be parallel-series reduced at all. In that case, an all-resistor circuit can still be reduced, but that would require some circuit analysis; you can not get away with simple consideration of the topology and resistor values.

0
How to determine and distinguish between a series and a parallel connection?
3
How does series circuit differ from parallel circuit?
1
How to Determine and Verify Series and Parallel
2
Need help understanding appliance ratings