From Liouville's integrability theorem we know that:

If a system with $n$ degrees of freedom exhibits at least $n$ globally defined integrals of motion (i.e. first integrals), where all such conserved variables are in Poisson involution with one another, then the Hamiltonian system is Liouville integrable.

I understand very little from the above, which brings me to my question:

i will try this one.

What this states in essence (and intuitively) is that the hamiltonian system of dimension $n$ can be decomposed into a cartesian product of a set of $n$ independent sub-systems (e.g in action-angle representation) which are minimally coupled to each other.

note $S^1$, literaly means topological circle or topological $1$-dimensional sphere. What it means, is that it represents (since this is topology and not geometry) a compact, bounded 1-dimensional space (1-parameter space). So a hamiltonian system with $n$ independent parameters (integrable) is (should be, locally) topologicaly the cartesian product of $n$ (abstract) $S^1$ spaces ($1$ for each parameter/dimension)

Each $S^1$ space represents a simple harmonic oscilator (a simple periodic system, or in other words a system moving on a circle, see the connection with $S^1$ spaces).

When a (completely) integrable hamiltonian system is de-composed into $n$ indepenent sub-systems, in essence this means that (locally, at every neighborhood of a point of the system phase-space) it can be linearised and represented as a stack of (independent) harmonic oscilators (stacks of $S^1$ spaces). This is the basic theorem of Liouville-Arnold on hamiltonian dynamics

For a simple example of a 3-dimensional (actually 2-dimensional, since the configuration space is the surface of a sphere) hamiltonian system which is completely integrable, see the spherical pendulum and analysis thereof 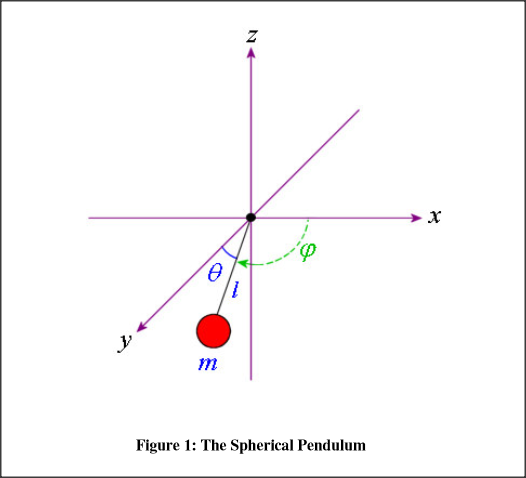 The spherical pendulum is 2-dimensional system (thus the phase-space is 4-dimesnional) and has a second integral of motion the moment about the vertical axis.

(a link on a more advanced analysis on the dynamics of pendula).

In other words the whole is just the sum of its parts.

What would be the hamiltonian space of a (for example $2$-dimensional) system which the dimensions are not independent (not-integrable). 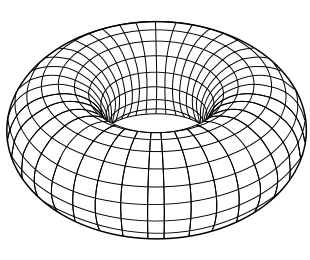 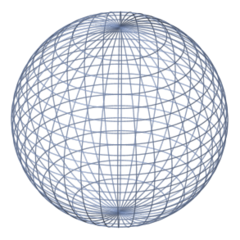 Elaborating a little on this.

Of course, if one sees the 2-dimensional torus as a 3D object (in effect this means embedded in a flat 3D euclidean space), it has curvature. This is refered as "external" curvature stemming from the embedding into a 3D space. But if one sees the 2-dim torus as a 2-dimensional surface on its own, it has no (zero) curvature. This is refered to as (intrinsic) curvature (in the riemannian sense).

For the 2-dim sphere, this is not possible. There is no way it can be cut and mapped into a flat surface of the same dimension. It has (intrinsic) curvature non-zero and this is also a measure away from flatness (and also a measure of dimension correlation). One example is maps of earth (2-dimensional spherical surface) on a flat paper, one can see that the map contains distortions, since there is no mapping of a sphere into a flat surface.

In general the conditions under which any given hamiltonian system is (completely) integrable is a very difficult problem.

Still another way to see this is an analogy with probability spaces. Consider 2 event spaces of 2 physical systems consisting of 2 parameters (lets say 2 coins) $\Omega_{12}$ and $\Omega_{AB}$.

This space $\Omega_{AB}$ cannot be de-composed into 2 independent sub-spaces $\Omega_A$, $\Omega_B$ as their cartesian product since the sub-spaces are not independent. This corresponds to a non-integrable Hamiltonian system (and a topological $2$-d sphere).

The analog of statistical independence in probability event spaces for hamiltonian systems is exactly the existence and functional (more correctly poisson) independence of the appropriate number of integrals of motion (complete integrability).

In other words for a non-integrable system the whole is more than the sum of its parts.

Hope this is useful to you

Liouville Arnol'd theorem state that given an integrable Hamiltonian system and denoting with $$M_a'=\{(q,p)\in\Gamma:f_i(q,p,t)=a_i\}$$ the connected component of the level sets of all of the first integral, then the restriction of the foundamental form on $M_a'$ $$p\cdot dq\Big|_{M_a'}$$ equal $dS(q,a)$ where $S$ is the generating functional of the canonical transformation$^\dagger$ $\mathscr{C}:(q,p)\mapsto(b=\partial_aS,a)$, i.e. that transformation such that the transformed hamiltonian depend on new momenta only $$H\circ\mathscr{C}^{-1}(b,a)=H(q,\partial_qS)=K(a).$$ Thus $\mathscr{C}$ maps your initial system into one for which the dynamic is really easy in fact from the new hamiltonian one get $$\begin{array}{ccc}\dot{b}&=&\partial_aK\\\dot{a}&=&-\partial_bK=0.\end{array}$$ If $M_a'$ is compact then our dynamical variables $(b,a)$ can be thought as an angle $\varphi$ on a torus labelled by a constant action $I$. In this case the solutions of the above equations are $$\begin{array}{cccc}\varphi(t)&=&\varphi_0+\partial_IKt&=\varphi_0+\omega_0t\\I(t)&=&I_0&=const.\end{array}$$ $\dagger$ One way to define a canonical transformation from the ''old'' system $(q,p,H,t)$ to the ''new one'' $(Q,P,K,T)$, is to ask that $\mathscr{C}$ preserves the Poicare-Cartan 1-form $$dA=p\cdot dq-Hdt$$ in the sense that $A_{old}=cA_{new}+\Delta F(q,Q,t)$. From this easily follow that $\partial_qF=p$, $\partial_QF=-P$ and $\partial_tF=K-H$, then performing the Legendre transformation of $F$ one obtain $S=F+P\cdot Q$ and the last set of equations became $\partial_qS=p$, $\partial_PS=Q$ and $\partial_tS=K-H$. The last equation is the so called Hamilton-Jacobi equation.

Not the answer you're looking for? Browse other questions tagged hamiltonian-formalism topology phase-space integrable-systems or ask your own question.

27
Does topology have any role in classical physics?
13
How to prove that a Hamiltonian system is *not* Liouville integrable?
1
Determining the geometry of the phase space of a system

31
Is there a physical system whose phase space is the torus?
3
Proof of Liouville's theorem: Relation between phase space volume and probability distribution function
7
Non-integrability of the 2D double pendulum
5
Symplectic leaves, tori and Poisson manifolds
5
What is a “stochastic web”?
4
Phase space with torus topology
1
Which Hamiltonian systems are intrisically linear?