finding equation of a water droplet

I have a water droplet which is falling down through its gravity. I've supposed that my droplet is an ellipsoid and I want to find the equation that represents this ellipsoid in XYZ coordinate system. Therefore, I put two perpendicular cameras, one in XY plane and the other in YZ plane to obtain two projection views of this droplet. Then, I wrote corresponding equations that relate these two projected views to the 3D equation of my droplet. Then, I solved these equations, but they returned infinity number of answers (for 3D droplet body). So, I added another equation for droplet volume and solved altogether again. Although, the volume equation remarkably confined the number of feasible answers, it could not unique the answer and returns two possible answers for the droplet as shown in below figure (i.e. both of the proposed droplets have the same projection views on XY and YZ planes AND have the same volume as well) 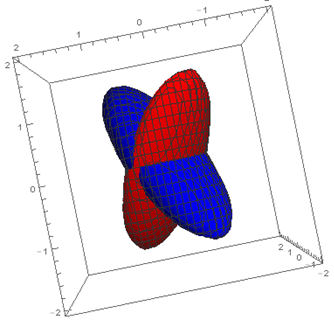 Fig. 1 Two feasible answers from top view (XZ plane) that we don't have any camera on it. Although these two possible solutions have the same projection views on XY and YZ planes, they are different from top view and this can help us in recognition of the correct answer.

However, only one of these droplets (red or blue) is really my falling droplet (that the cameras have captured its frames). Therefore, I need one more piece of information to be able to distinguish the right one. My question is that which equation OR condition I can use (like the one I did for droplet volume) in order to be able to separate my desired answer among two existing possibilities?

I am using two high speed cameras @ 4500 fps and since I am investigating a collision phenomena, it really needs this high amount of frame rate (or even more). A 2 mm spherical solid particle has been shot by a launcher and collides to my 2 mm falling droplet. Right before colliding, the droplet undergoes deformations because of some forces applied to it through the particle, particle launcher flow, etc. I have a third camera, but it is 400 fps and also it should be "synchronized" with others that is another issue as well. What I mean by asking this question is to find a "condition" OR another "related equation" to give me the capability to distinguish between these two possible answers (like what I've added for droplet volume). I have also thought about putting a mirror behind the droplet with a specific angle such that I can capture two different views of the droplet simultaneously with one camera OR putting an appropriate array of some laser emitters (or any other kind of pointer) on top plane to mark the droplet in both frames (at least in one point) so that I can use marked point(s) to identify the answer. However, I am still seeking to choose the most convenient and applicable method. All of your helpful ideas are really appreciated. Below is a schematic of my experimental setup. 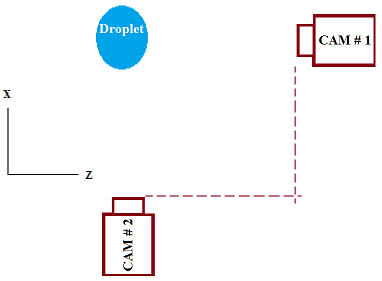 Rather than adding more cameras, just add some mirrors.

The problem you have is that you are trying to do tomography with an under sampled system. This is a VERY broad subject - a bit outside of the scope of your question. But mirrors will work. I would recommend that you place them so the images are all in focus - depending on the depth of focus of your camera you may need to play with the "direct" path as well. But for example four mirrors set up as a pair of periscopes would allow one camera to take two images from +- 22.5 degrees. A second setup at 45 degree from that would give two more views for a total it four. This will reduce the degeneracy.

Here is a diagram of what I had in mind: 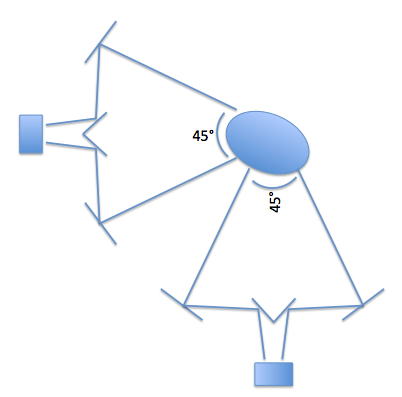 You can actually buy a device similar to this - see for example https://www.lhup.edu/~dsimanek/3d/stereo/3dgallery5.htm which includes some examples of the pictures taken with the Loreo stereo adapter - it includes a picture not unlike the beamsplitter I drew. Note though that they have the two sets of mirrors offset slightly, and that they are aimed "straight in front". This ensures that the focal planes for the two sides will coincide, but it also means that you may have a hard time getting very close to the subject - although the stagger may help with that. At any rate - I suggest you play around with the setup (using a small bead the size of your drop) until it looks right with a normal camera, before trying to do this with the high speed camera.

It occurred to me that since the drops are quite small, you might be able to simplify the setup with a pair of prisms - the basic idea being that a prism shifts the angle of the light between input and output. It might be tough to get the image you need (magnification, distance, ...) especially since a simple prism bending light through a large angle may have significant chromatic aberration which will make measuring the dimensions hard. Unless, of course, you use a monochromatic light source (or a filter on your camera). If you have a digital color camera you could see whether looking at just one of the R,G,B components of the image would give you a clearer image... 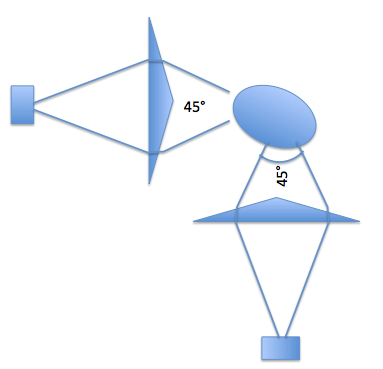 If you include a flat part in your prism, you might be able to increase the number of views to 6, spaced just 15 degrees apart. And since the "straight through" view is then coming through the prism, I believe the optical path lengths will in fact be the same - because basically the prism is a "very crude lens" and lenses do their focusing thing by having the same path length for all rays from object plane to image plane. 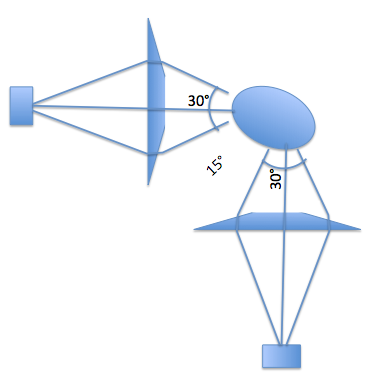 These are just some late night thoughts. If you have a buddy in the optics department he can probably come up with far better optical arrangements that achieve the same thing. This is really a bit like making a stereo camera - it's been done as the above link shows; and there is a company that makes attachments for various cameras - they may be able to give you exactly what you need.

PS - although this is a LONG time ago, I took high speed pictures of water drops during my graduate studies - so this is a trip down memory lane for me (and yes I had only one camera and multiple mirrors... - but it was an Imacon that could do 10 Mfps and my 0.4 mm diameter water jets were going at Mach 6...)

A very pragmatic solution would be to introduce a 3rd camera looking from a 3rd angle to make the problem well-defined.

This camera doesn't have to be as good or fast a camera as the other ones (assuming that those are highspeed cameras), because you basically only need 1 frame for which you know for sure which of the 2 possibilities it is. This does mean that this camera has to be synchronized with the two 'main' cameras, which can be a bit of a hassle.

The reason that you only need 1 frame from camera 3 is that you know that the droplet shape cannot suddenly, between 2 frames, flip from one solution to the other (unless they are extremely similar, in which case you are basically looking at a sphere anyway). You can thus infer the correct shape of the 2 possibilities, from the previous frame for which you knew the shape, or the other way around, from the next frame for which you knew the shape.

Unfortunately, if you only take the projected ellipses you will need 3 points of view to get a unique solution. For 90 degree separation of the cameras there is always a rotation of the drop that gives you the same projections, as you image shows (unless you manage to image it nicely on axis which is probably unrealistic). For other angles between the cameras I think this becomes a general deformation of the ellipsoid rather than a rotation but the effect is the same.

If you are interested in the maths behind the reconstruction you can see here or here.

Probably the simplest/most likely to work solution is to add a third camera, but if you don't want to do this I have some other suggestions which may work, but aren't ideal for your case.

If this was a standard stereo vision situation you would identify some common features in both images and use these to determine their 3D coordinates. This would give you some extra points to define your ellipsoid. Unfortunately water droplets tend to not have any significant features you can identify. You may be able to use lighting to create a shadow over half the drop. I'm not sure how well this would work though.

Similarly you could use a fringe projection type approach. If you project laser lines onto the drop you can look for deformation in their shape to give you the extra information. I'm not sure how easy it would be to get a good pattern at your scale. Also I think the standard approach uses multiple patterns which may not work for a dynamic system.

My final point would be can you get away with not knowing? Your two options are rotations of each other and therefore you will have lots of similar properties. I think a collision with a flat plate will have the same angles in either case.

Not the answer you're looking for? Browse other questions tagged fluid-dynamics surface-tension flow or ask your own question.

14
How to prevent water droplets becoming larger on the tip of a nozzle?
2
Adding a tracer to the surface of a water droplet
0
How does a piezoelectric drop generator work?
0
Resources for droplets investigation

12
Calculating Reynolds number for a viscous droplet
4
Best shape to reduce the splash of a droplet?
2
Adding a tracer to the surface of a water droplet
0
Resources for droplets investigation
2
Distance traveled by a water jet
1
Water droplet lensing
70
Why does water falling slowly from a tap bend inwards?
3
What causes water droplets to drop in periodic, but not uniform time intervals?