What is the actual energy content of the Sun?

Beside the energy released by nuclear fusion in the core, the Sun is a hot plasma of hydrogen and helium ranging from thousands to million of degrees. So how does that translate into energy ?

I have thought of an approach to find out how much energy a cubic meter of the Sun's core has by trying to calculate how much the "heat" in this cubic meter would equal in terms of energy. I used the specific heat capacity for hydrogen and helium in order to see how much energy it would take to raise the temperature of a cubic meter of the Sun's core with density of $150\times10^{3}$ $kg/m^3$ to $15\times10^6$ $°K$, and that's what I got:

The heat capacity of hydrogen is 14 kJ/kg.K, so:

One problem I faced was determining the specific heat capacity of the hydrogen at higher temperatures. As found here, the heat capacity increases with temperature. I used the value at 250 °K, so the number I calculated might be lower limit of the correct value.

Now, was this specific heat capacity approach correct ? If not, then are there any other ways to express the temperature of the Sun in terms of joules and energy ?

So a while ago I did a little project where I grabbed a "standard solar model" from this paper, which gives me some information that's useful for actually making an estimate. (Unsurprisingly the link given to download the data has changed in the last ten years; I haven't sleuthed to see whether the data is still publicly available.) 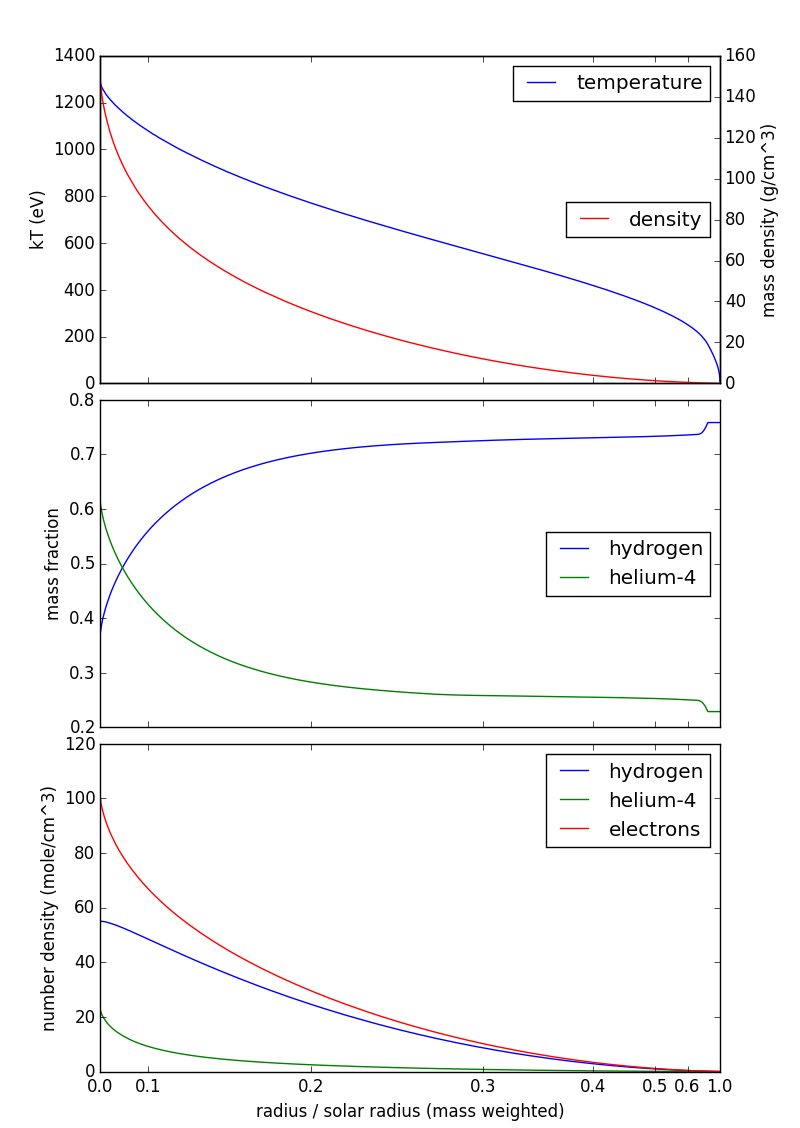 Now, if the sun had uniform density you could estimate its gravitational potential energy, the energy that was released when all the pieces fell together, as $$ U_\text{uniform sphere} = -\frac35 \frac{GM_\text{sphere}^2}{R_\text{sphere}} = - 2.3\times10^{41}\,\mathrm J \text{ (uniformly dense sun)}. $$ That's pretty close to our stored heat! We can do a little bit better since we actually know the density profile of the sun, by finding the potential energy released as you lay down each spherical shell, $$ U = - \int_0^{M_\text{sun}} \frac{G M_\text{enclosed}(r)}{r} dM = -6.15\times10^{41}\,\mathrm{J}. $$ This gravitational self-energy is roughly twice the stored kinetic energy --- which a real astronomer would have predicted as a consequence of the virial theorem.

Fun, So you are asking about the thermal energy content of the sun?

If we assume that all the hydrogen is dissociated. (single atoms) Then each atom has three degrees of freedom and carriers 3/2 kT of energy.
So count up the number of atoms at each temperature.... That will work until the atoms ionize. Then there will be equal energy in all the electrons. (one from the H and two from He) (I'll leave all the messy details to you :^)

At the end of your question you ask if there are other ways to express the temperature of the Sun in terms of energy. This is probably not exactly what you're looking for, but from Wien's law $\lambda_{\rm max}T=b$ ($\lambda_{\rm max}$ is the peak wavelength of the Sun's $\sim$blackbody spectrum, $b$ is Wien's displacement constant) and $E=\frac{hc}{\lambda}$, the temperature of the Sun's photosphere can be (and in some astronomy circles, often is) expressed as an energy, in this case about $2.4 \;{\rm eV}$ or $4\times10^{-19}\;{\rm J}$. This is of course a photon energy, and doesn't encode the total thermal energy content in any way, but it does encode the temperature.

The sun is more than a cloud of hot gas that is radiating energy. The sun also has energy stored in hydrogen "fuel" that will be "burned" through nuclear fusion into helium, releasing a lot of energy.

Let's estimate that all of this will undergo fusion. The dominant reaction is the p-p chain, which takes six protons (hydrogen nuclei) and produces a helium-4 nucleus and two protons. The two output protons can go on to further reactions, so the net reaction is $ 4 \mathrm{p} \rightarrow ^{4}\mathrm{He}$.

This is an awful lot more than is stored as heat at any one time!

There are some caveats that make this only a rough calculation -- not all of the hydrogen will be fused, and there are other reactions that contribute. But it shouldn't be too bad!

Not the answer you're looking for? Browse other questions tagged thermodynamics astrophysics sun stars or ask your own question.

12
Stable muon density inside a white dwarf star?
7
Can the Sun's core be treated as an ideal gas?
1
What is the Hydrogen and Helium composition of the Sun in terms of their different states?
1
Another way to find the energy diffusion time in the Sun?
0
Specific heat of ionised Helium in the Sun?
0
How much of Sun's mass is "regular" matter? How precisely do we know Sun's composition?

3
Why will the increase in the sun's luminosity accelerate with respect to time?
3
Sun energy production as a function of depth
4
Does one square centimenter of the sun core really radiate this amount of energy?
6
How would normal matter behave under conditions found in the core of the sun?
7
Can the Sun's core be treated as an ideal gas?
4
Temperature of fusion in the Sun vs. fusion in controlled experiments on Earth
1
Another way to find the energy diffusion time in the Sun?
0
Positron-electron anihilation in the Sun
0
Why do helium fuse in the Sun?
0
Specific heat of ionised Helium in the Sun?