Considering the case below:

a Block $A$ having the mass $m$ is moving at the speed $v_1$ then it hit the block $B$ having the mass $M$ with no initial speed. After the collision. Block A is sticked with block B and moving at the speed $v_2$. Assumed that there is no drag and frictional force, the block is on ground and have no gravitational potential energy. Those two block moving with the same direction and speed. According to the conservation of energy and momentum:

because those 2 block moving with the same direction so the vector notation here is needless. After the collision there is no displacement in height of 2 block so there is no change in potential energy. Only the kinetic energy of $m$ is transform to $M$ so $M$ got speed $v_2$ and $m$'s speed decrease from $v_1$ to $v_2$

Can anybody explain why is it. I don't understand why

Moreover. For which cases using Momentum is advantageous. I means we can use the conservation of energy to calculate the changing of the velocity and the energy transformation of the system. So in which case it can't be used so we must use momentum to calculate. 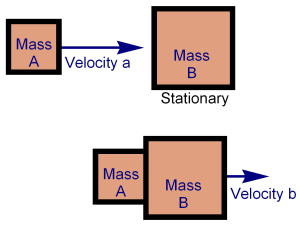 . According to the conservation of energy and momentum:

Kinetic energy and momentum are conserved only in a perfect elastic collision, if the bodies stick together the collision is inelastic an only momentum is conserved:

After the collision velocity would be anyway lower as KE should be distributed among more mass, but some KE is lost in the crash. How much?

Some energy has been transferred to B, but two thirds of the kinetic energy have been changed to other forms of energy. The general law of 'conservation of energy' has not been, anyway, violated

Velocity of center of mass is the same, although KE has changed.

Please note that momentum is conserved because we are assuming that on the surface of contact there is no friction.

For which cases using Momentum is advantageous...

The thing to keep in mind is that for inelastic collisions, energy is not conserved within the system. Some energy is lost as thermal energy, and after all, it takes some energy to get the blocks to stick together. This doesn't mean that the Law of Conservation of Energy is false, though. It just means that energy has left the system that you're studying (Blocks $A$ and $B$). If you were to measure the amount of energy that has left the system, you would see that in general, Energy is still conserved.

As a future pointer, generally we only assume that perfectly elastic collisions conserve both momentum and energy.

The problem with your solution is that the inelastic collision and assumption that kinetic energy is conserved are mutually exclusive. You can see that in your math when you try to solve for $v_2$.

This tells you that an inelastic collision can only be happen at the same time as conservation of kinetic energy if one of the masses are massless ($M=0$). In this particular set-up, this is the same as saying that $M$ was never present in the first place, and there was not really any collision.

Both energy and momentum are conserved as always. But to understand why this statement is true you have to look at the system as you described it a little more closely:

In order for blocks A and B to stick together after the collision, the force between them should be zero when the velocity difference is zero -otherwise that force would continue to accelerate block B and retard block A.

Now let's imagine a little spring between A and B - this represents the way that the force of one object on another results in mutual deformation and the storage of elastic energy, but I am making it into a real (massless) spring for illustration.

When A makes contact with the spring, this spring starts being compressed and at the same time B starts feeling the force of A. But key here is that the spring is compressing. And that this compression means that energy is stored. Continue compressing the spring until A and B are moving at the same velocity: this corresponds to maximum compression of the spring. As the blocks keep moving, the spring will start expanding again further accelerating B relative to A until they separate and the spring is once again at its natural length. That is the process of an elastic collision - the energy is stored elastically during the collision and returned at the end.

For an inelastic collision, the "spring remains compressed. If I could magically "lock" the spring (make it stick) the stored energy in the spring (which you should be able to calculate is exactly equal to the "missing energy" in the blocks' motion) remains there. Now for an inelastic collision the spring absorbs the elastic energy and turns it into heat. This is still conservation of energy - but converting kinetic energy into thermal energy.

I hope the above clarifies things. You should try to write down the math for this mass-spring-mass system. Let me know if you struggle with that.

I also wondered about this - the limitations imposed on solutions of elastic collisions by the dual laws of conservation of both momentum and kinetic energy - and whether there is there a combination of masses that can result in two masses moving with the same velocity after a collision. Many here have quoted as presumption a priori that the situation implies an inelastic collision, but it wasn't immediately obvious to me that this must be so.

Solving the simultaneous equations got very messy very quickly, so I plotted the equations for a theoretical mass of unit one and velocity=2 colliding with a identical stationary mass in a single dimension (perhaps carriages on a rail, or perfectly straight collision of billiard balls). The plots show the results, post collision, for the velocities of mass 1 ( x axis) and mass 2 (y axis), under conservation of momentum and conservation of kinetic energy. The only possible solutions must satisfy both, thus we examine the intersections: 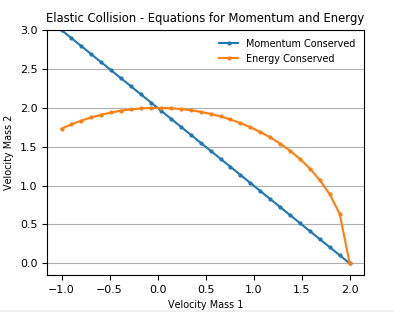 There are as expected two solutions, one impossible, in which mass 1 essentially passes through mass 2 unimpeded, with no effect on mass 1 (velocity mass 1 = 2, velocity mass 2 =0), and the other (and only feasible solution) with mass 1 stopping and imparting its full momentum to mass 2, which now moves away with velocity 2 (think of the white cue ball stopping dead when hitting another ball full on).

Now, if we consider the case with mass 2 twice that of mass 1: 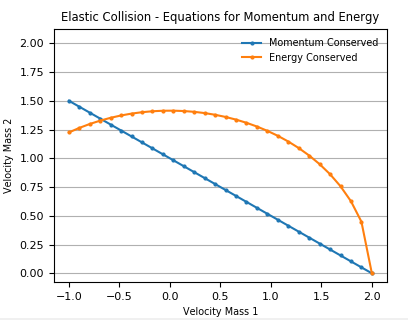 We see the feasible solution is that in which the lighter mass 1 rebounds off heavier mass 2 (mass 1 velocity ~ -0.65, mass 2 forward at ~ 1.3). Clearly, any case in which mass 1 is lighter will see it rebounding to some degree, and mass 2 being propelled forward. So there is no possibility for $m1 < m2$ in which they can merge with the same velocity. 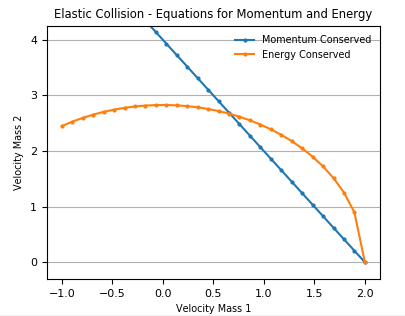 We now see mass 1 retaining positive momentum (velocity ~0.65) and mass 2 shooting off rapidly (velocity ~2.7). From this, we can deduce that for any $m1 > m2$, m2 will achieve velocity >2, and the original mass 1, having imparted some momentum to mass2, will retain velocity within bounds #0< v2 < 2$. Again, there is no solution of any two masses satisfying conservation of both momentum and energy which allows the two masses to do anything other than "bounce off" each other two some degree - which is I suppose what you might infer from an elastic collision!

I haven't investigated this further, but I see no reason to suspect the result would not generalise to elastic collisions in which both masses are moving, or to two or three dimensions.

Also, I was interested to find that as ratio of $m1:m2$ was increased, the velocity achieved by mass 2 was limited to 4 (or, I suspect, double whatever the initial velocity was) - again, I suppose there has to be some limit, especially considering that at the same time (mass 1 getting relatively much heavier) mass 1 velocity approaches a limit of 2 (it is pretty much unaffected by the small mass 2) - so there is little momentum loss, and mass 2 velocity is necessarily restricted.

So I hope you can see, as I now can (and as was presumably obvious to the more experienced respondents here) there is no possibility for both masses to experience the same velocity under an elastic collision. Also, that the behaviour is fully deterministic by solution of the simultaneous equations!

EDIT I guess it makes sense that the maximum post-collision velocity for mass 2 is double that of (an relatively very heavy) mass 1 - this can be seen be adjusting the frame of reference such that mass 1 is stationary and mass 2 approaching it with velocity = -2 ..... a heavy enough mass 1 will act much like a wall, and mass 2 will bounce off it elasticly with velocity = +2, a net change of +4 .... thus the maximum velocity differential $|v2 - v1|$ is bounded by the magnitude of the initial velocity differential (as when a particle bounces off a wall).

though momentum as well as energy is conserved but definitely the sum of individual momentum of particles is not equal to sum of individual K.E. of the particles. also there may be different value of K.E. for same momentum. So can not make any result by manipulating the equations.

Not the answer you're looking for? Browse other questions tagged newtonian-mechanics energy momentum conservation-laws collision or ask your own question.

15
How to explain independence of momentum and energy conservation in a 2-body collision in elementary terms?

0
Calculation of velocity via kinetic energy and momentum yielding different answer
1
Collision of Inelastic ball above the ground
1
What's wrong in my approach towards solving this problem?
0
Relative velocity, momentum conservation
0
Conservation of momentum: Collision involving Tenis ball on top of Basket ball