Non-integrability of the 2D double pendulum

We remind the reader that if a system with $n$ DOF exhibits at least $n$ globally defined integrals of motion (first integrals), where all such conserved variables are in (Poisson) involution with one another, then the system is (Liouville) integrable.

Now coming to the famous case of the 2D double pendulum, with weightless rigid wires attaching the two masses, having the lengths $\ell_1$ and $\ell_2$, the generalized coordinates here are given by the two angles that each mass makes with the vertical, denoted respectively by $\theta_1$ and $\theta_2.$

It is rather straightforward to show then that under constant gravity field, the Lagrangian is given by: 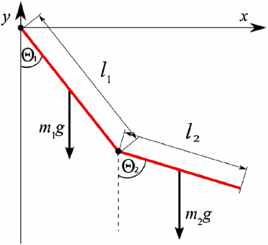 To start things off I'd say that noting the $L_z$ component is conserved seems to mean pretty much nothing, since you're considering the motion as restricted to the $\mathcal{X}\mathcal{Y}$ plane. If you had assumed the motion along the $\mathcal{Z}$ axis to be possible, then we'd be talking about the spherical double pendulum instead of the planar one (which is the case, since the lagrangian has two degrees of freedom).

The energy will be conserved because the system is autonomous (time-independent). Notice also that an integrable autonomous system with $n$ freedoms has $n$ conserved quantities, one of them being the energy. So, since our system has two degrees of freedom, there is one constant of motion missing for it to be integrable. Differentiating $L$ with respect to $\dot{\theta}_1$ and $\dot{\theta}_2$ will give us the canonical momenta of the system, but notice that the derivatives of $L$ with respect to $\theta_1$ and $\theta_2$ are not zero. Thus, the canonical momenta are not conserved quantities. Also, the total energy of the system doesn't factor as a sum of individual energies, since the Lagrangian has mixed terms in it. You cannot extract any other quantity from the Lagrangian which should be conserved, since mechanics talks about the conservation of momenta and energy (and sometimes their projections). Since there are not as much conserved quantities as there are degrees of freedom, the system is non-integrable.

P.S.: In one dimension we can clearly see that (using simple examples as the harmonic oscillator or the simple pendulum) some systems do not conserve their momenta. Even though, if they're autonomous then they're integrable, because they have one degree of freedom and one conserved quantity: energy.

EDIT.: Since the question is directly oriented to "is it possible to obtain, from the Lagrangian, an answer about integrability?", then (as suggested in the comments) I'll sketch something on Noether's theorem. The theorem relates Lie groups to invariant quantities, so it's just one more way to find conserved quantities. It basically says that if you find a transformation that leaves the Lagrangian invariant, then there's a conserved quantity associated to that transformation. As an example, when the transformation reduces to a translation, invariance of the Lagrangian implies momentum conservation; much the same way, if the transformation is a rotation, then invariance implies the conservation of angular momentum along the axis of rotation. So this is basically a way of using symmetries of the Lagrangian to obtain conservation laws (knowing Noether's theorem content well is very important to a clear understanding of many concepts of Quantum Mechanics and Quantum Field Theory). I'm not being quantitative because proving the double pendulum's Lagrangian is not an invariant is tedious, even thought it should be somehow obvious by just looking at it.