I'm currently going over some undergraduate exams on particle physics and I'm having problems with a specific reaction, namely

which, in my opinion, is not allowed due to strangeness violation ($0 \rightarrow -2$), so it could only be a weak interaction. Since it's purely hadronic, though, it should be a strong interaction. Can anyone explain to me where I'm wrong? Or is the professor's answer wrong? He marked the "not allowed" answer with "wrong" (no further explanation).

This reaction is not possible, but for a nontrivial reason.

As you note, the non-conservation of strangeness forces this to be a weak interaction, but there is nothing stopping baryons from partaking in weak interactions (as in e.g. this reaction). However, no charge is exchanged in the process, so it would be due to a weak neutral current, and these do conserve strangeness. 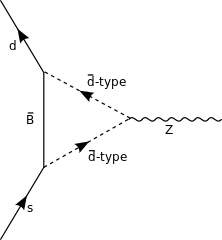 Such a flavour-changing neutral current is as yet hypothetical, and has not been observed. (See for instance, the Z boson Feynman rules.)

This reaction can proceed through multiple charged weak interactions (i.e. instances of a virtual $W$ boson being emitted or absorbed, the flavor-changing weak processes of the standard model); provided sufficient center-of-mass energy, of course. Schematically:

Not the answer you're looking for? Browse other questions tagged particle-physics textbook-erratum or ask your own question.

0
My book uses helium weight in reaction formula instead of weight alpha particle?
2
Looking for a list of possible subatomic particle collisions
2
How to determine a strong or weak interaction (Strange particles)?
1
Neutrino Reaction: Is the Following Reaction Allowed?
1
Is there a $\mathrm{p}^0$ particle?
5
Can quarks of different generations enter a $Z$ boson vertex?
1
Quark explanation of reaction
4
What Does Up-Down Asymmetry Mean?
1
Possible error in Tannoudji, Vol. 1, p. 153
0
How to draw Feynman diagram of quark decaying to more than three quarks (weak), and tell if it's Cabibbo-allowed/supressed?