Why can't we reach the ends of rainbow?

Rainbows are spectacular things. But I imagine why we can't reach to the ends of rainbows. Do rainbows have no ends ? If so, why can't we reach at them? If you go closer,they will go further. Why?

Why can't we reach the ends of rainbow?

The WIkipedia article you linked to contains the explanation

The rainbow is not located at a specific distance, but comes from an optical illusion caused by any water droplets viewed from a certain angle relative to a light source. Thus, a rainbow is not an object and cannot be physically approached. Indeed, it is impossible for an observer to see a rainbow from water droplets at any angle other than the customary one of 42 degrees from the direction opposite the light source.

If you go closer,they will go further. Why? 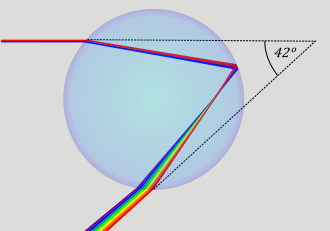 As you walk 1 meter towards the droplets that are refracting the rainbow you initially see, you move outside the the "beam" from those specific droplets and move into the "beam" refracted by droplets 1 m further back.

You can reach the end of a rainbow, if you make one using a hose pipe on a sunny day. It is possible to locate the ends to within a few centimeter.

Share
Improve this answer
edited Oct 25 '16 at 6:35
answered Oct 21 '14 at 15:05
user56903user56903
$\endgroup$
Add a comment  |
Highly active question. Earn 10 reputation (not counting the association bonus) in order to answer this question. The reputation requirement helps protect this question from spam and non-answer activity.

7
Is it possible to witness a circular rainbow?
0
Why can't we see Rainbows from its end points?

4
Why can't I see far when I look in a mirror?
5
Shape of the rainbow
19
Would you see a rainbow from refraction when the sun is in front of you?
5
Why is rainbow always circular?
1
Why are some colours of rainbow lighter than others?
10
Can a rainbow be seen from above?
1
Why does purple appear in a rainbow?
3
How pure are the colors of the rainbow?