Speed of sound and Break the sound barrier [duplicate]

What happens when plane exceeds the speed of sound? and What is the interpretation of the conical shape that appears behind the plane? 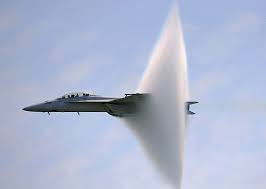 The shock wave from a supersonic object is a cone composed of overlapping spherical wavefronts. As individual wavefronts form, they propagates radially outward at speed $c$ (speed of sound) and have a radius $ct$. At the same time the object traveling at speed $v$ moves forward $vt$. The angle of the vertex of the of the shock wave is known as the Mach angle and is given by:

Sound energy, created by aerodynamics and the engines along the line of flight, accumulates in a cone within which the aircraft becomes ever closer to the apex as it approaches Mach I. Because of Doppler-induced shortening of the sound waves, ultrahigh ultrasound frequencies develop and accumulate anterior to the nose and leading edges.

High frequency ultrasound propels particles (including ice particles and water mist droplets) away from the sound source. . Intense ultrasound in the anterior sound cone “atomizes” raindrops into a similar conical cloud of fine droplets that are similarly propelled forward. At Mach I, the aircraft-generated sound (aerodynamic and mechanical) proceeds laterally at the same speed as the aircraft travels forwards, accounting for the 45-degree angle that the axis of the flight path makes with the lateral margins of the sound cone. The aircraft sounds remain within the sound cone (which is somewhat incorrectly termed the “shock wave”), and is concentrated towards its apex. If one were to shrink the aircraft to point size, the apex of the cone at Mach I would be a sharp point– resulting in a perfect cone.

The high-energy ultrasound will sweep any ice crystals and water droplets to a disc-like area confined within the cone, anterior to the nose and leading edges of the aircraft. As Mach I is exceeded, the aircraft passes through this cloud disc. This accounts for why sound barrier cloud discs only occur when there is water content in the air. The conical shape of the anterior portion of the cloud disc is related to the shape of the anterior sound cone which creates it.

Because high-energy ultrasound exerts a heating effect, the temperature of the cloud disc should be higher than the surrounding air.

Not the answer you're looking for? Browse other questions tagged waves acoustics aircraft shock-waves or ask your own question.

4
Why do vapour cones form around jet fighters?

9
Does my model aircraft propeller beat the sound barrier?
4
Shock-waves, Bangs and the Speed of Sound
6
Breaking the sound barrier underwater
2
Relation between the direction of propogation of sound and loudspeaker's diameter
1
About speed of sound?
6
Liquid wave faster than sound in the above gas: possibility implications
1
What makes a origami paper popper produce loud sound?
1
Moving faster than speed of sound in material
3
Why is it a sonic “boom” and not a sonic “boooooooooooooooo…m”?