Can a box on a frictionless rotating table rotate?

I am trying to digest the following problem.

Suppose a block of mass $m$ lying on a horizontal, frictionless turntable is connected to a string attached to the center of the turntable, as shown in figure below. According to an inertial observer, if the block rotates uniformly, it undergoes an acceleration of magnitude $\frac{v^2}{r}$, where $v$ is its linear speed. The inertial observer concludes that this centripetal acceleration is provided by the force $T$ exerted by the string and writes Newton’s second law as $T = mv^2/r$. 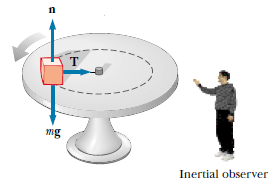 In my opinion, the box cannot move in circular motion because there is no friction between the table and the box. Instead, the box will slip so it will stay at the same position.

Can a box on a frictionless rotating table rotate?

Your position is well-taken. But note that the discussion does not mention any rotation of the turntable...

Since the turntable is frictionless, there is no way that the rotary motion, if any, of the turntable can influence the block. The only force between the turntable and the block is the normal force balancing gravity. Any motion of the block, caused by some other outside force, will play out without any influence from the rotating table.

If a linear velocity for the block is assumed, the equations in the discussion apply; the "turn" of turntable is simply irrelevant...

Since the box is attached to the center of the table by a string, if you set it in motion with a tangential velocity, it will keep moving in a circle around the center, with the string supplying the required centripetal force.

The movement of the box does not need to match how the table itself rotates -- as User58220 explains the turning of the table cannot be felt by the box, so its orbit around the center can be slower or faster or in the same or opposite direction.

In particular it is possible, by random chance, for the box to stand still as seen by an inertial observer, or to stay above the same point on the table while it rotates.

(If the box moves relative to the table, presumably the string will get twisted as time goes on, and eventually it may end up exerting some kind of non-centripetal force on the box. But the problem most probably assumes that this can be ignored by the same idealization that claims the table is frictionless).

5
Finding the acceleration of a cart rolling on a table
0
Two masses connected by a string in horizontal frictionless table
2
Consistent method for finding direction of static friction
3
Why & how do bodies attached by extensible strings move with common acceleration?
4
About reference frame in Newton's second law?
3
Circular motion, kinetic friction and tension
2
The dynamics of a cornering wheel
1
Work done by Tension on a system-generalisation