Why does the moon stay with the Earth?

However, attempting to picture this has confused me a bit. Why doesn't the moon just get left behind?

I'll draw a diagram to show what I'm imagining: 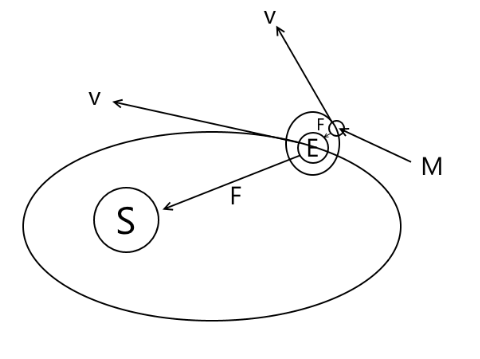 My slight issue and where I think I might be missing something, is why doesn't the Earth's speed just mean it can just fly away from the moon and just leave it flying in it's tangential velocity?

I know I'm missing something here, so if anyone could point that out, it'd be greatly appreciated! Sorry if it seems obvious!

I've thought along the lines that the moon might also be following the Earth's orbit of the sun but the law of universal gravitation would, as far as I know, stop that being true since it's of a differing mass.

Edit: Alternatively, why doesn't the Earth just smash into the moon?

Recall Galileo's law of motion: if you drop two objects close together from the same height, they experience the same gravitational acceleration, so they stay together during their fall: 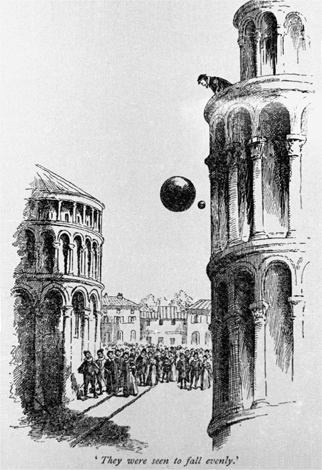 Now think of the ground as the Sun, the large object as the Earth, the small object as the Moon, and the fall as their orbit around the Sun: the Earth and the Moon stay together, because they experience (almost) the same gravitational acceleration from the Sun.

Notice that I said almost: the gravitational pull of the Sun decreases with distance, so the object closest to the Sun does feel a slightly larger acceleration. This means that if there wasn't any gravitational force between the Earth and the Moon, they would indeed slowly drift away from each other over time. But the gravitational force between them prevents this, and because this force is much bigger than the net effect of the Sun, the latter only causes small perturbations in the motion of the Earth and Moon around each other.

Here's an image I found from Britannica:

Alternatively, why doesn't the Earth just smash into the moon?

You might as well imagine that it is fixed. Basically, as far as the moon is concerned gravitationally, only the Earth exists. For the Earth; our sun. For the Sun; a black hole, ect... and everyone of them has an inherited orbital velocity from their 'parent'. Orbit is not a place.

As for why the moon doesn't crash, it formed outside of the Earth's Roche radius and we are slowly losing it. Viewing the moon shortly after it coalesced, it would have appeared 15 times larger. Its effects on the Earth are drastic: How the Earth Would Be Without a Moon (Full Documentary) +1 for Patrick Stewart narrating. ~13min describes the Roche effect.

I don't understand the physics or the math of it, but viewed from an astronomy stand point it makes perfect sense to me.

The Earth/Moon orbit is not truly metastable. As someone alluded to, the moon is actually very very gradually getting further from the Earth. Conversely Mars' moon Phobos is gradually moving closer to Mars over time and Phobos will eventually crash into Mars.

My slight issue and where I think I might be missing something, is why doesn't the Earth's speed just mean it can just fly away from the moon and just leave it flying in it's tangential velocity?

Even though you have drawn the force of gravity, you are not thinking about it.

First of all the force in general is bidirectional, the earth pulls the moon and the moon the earth. (It is similar to having a taught string connecting them ). Secondly the motion is circular/eliptical which means centrifugal forces are acting. That the earth/ moon stay in orbit around each other means that the centripetal balances the centrifugal, and that is why the orbit is stable. To get exact numbers one will need to solve the equations.

The solutions are conic sections, and yes, gravitating bodies can collide, or escape completely depending on the velocities and proximities. The earth does not crash on the moon because their relative velocities are such that the orbit is stable.

While it definitely looks like it if you view it with an astronomy program, it is not entirely correct and a misconception. Sun, earth and moon are not nailed to a specific location, there is no axis stuck in vacuum. Each body attracts each body.

Not only that, but each of the bodies attract the every body in the universe including other planets and even other stars ! Because the sun is much more massive than the earth and the earth is much more massive than the moon, it looks like earth and sun are not much moving. But astronomers are able to find these tiny wobbles of a sun and so they are able to tell if a sun has planets.

If the sun attracts both earth and moon, why does it not disturb the path ? Imagine you are juggling; it does not matter if you do it while standing still or someone drives you in a car around or you are flying in a plane. Speed itself does not disturb your motion as long as it is constant speed. If you are only interested in relative motion, even constant acceleration is allowed. While both earth and moon are acclerated to the sun, they experience nearly (!) the same accleration, so if we are only interested in the motion between earth and moon, we can mostly ignore the influence of the sun.

Minor correction: What the soon does (and this is the reason the image of the Britannica given by Alfred Centauri is wrong) is forcing both earth and moon on a nearly circular path. The sun attracts the moon with twice the force than that of the earth, so that the path of the moon is always curved inwards. From the outside it looks like a very weak polygon.

82
Why doesn't the Moon fall onto the Earth?
38
Why don't we feel the subtle speed change of Earth's elliptical orbit?
4
How does Earth carry Moon with it, if it can not force Moon to touch it by gravitational force?

4
How does Earth carry Moon with it, if it can not force Moon to touch it by gravitational force?
2
Moon Gravity Vs Earth Gravity Pull
0
Why the Moon does not change its orbit from Earth to an another planet?
3
Since the Earth orbits the Galaxy, why doesn't it "fly away" from astronauts?
1
What happens to the water on the surface of the Earth if the Earth is not rotating about its axis in the Earth-Moon system?
1
Why does earth not follow the same rule around sun as moon follows around earth?