As simple as this question might seem, I failed to intuitively answer it.

Now if we want to stop this truck, we can simply send another truck with the same mass and velocity in the opposite direction to collide with the first one, and both of them will stop because of the conservation of momentum.

But what if we want to stop the truck by doing work in the opposite direction of motion ?

If yes, then how is the momentum conserved, and if no, then where does the energy of the motorcycle go?

The other answers are great. I decided to plot it, however, because it's nice visualizing these things. Since your biggest doubt is about kinetic energy, be sure to pay attention to the last graph.

SYSTEM. Motorcycle going to the left, truck going to the right, bound by an elastic rope ten meters long ($k=100\frac{\mathrm N}{\mathrm m}$). Masses and speeds are as per OP. Note: the rope is not a spring. A spring pushes when compressed. The rope simply gets loose (i.e. it has a deadband). 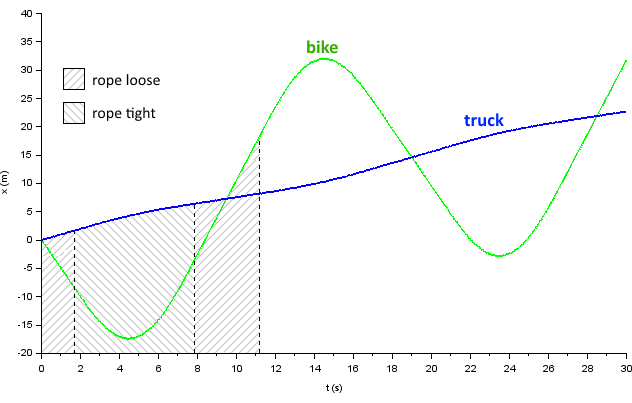 This will repeat forever, as there's no energy dissipation in this model.

The rope's actions are more clearly visible in the speed plot. 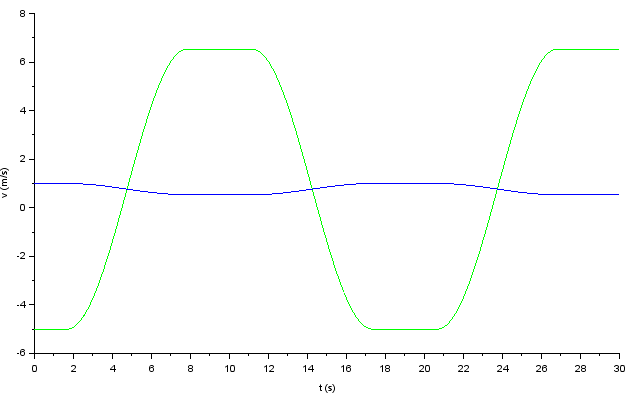 As the truck is much more massive than the bike, it barely feels the rope's actions. The bike, however, is being tossed all over. 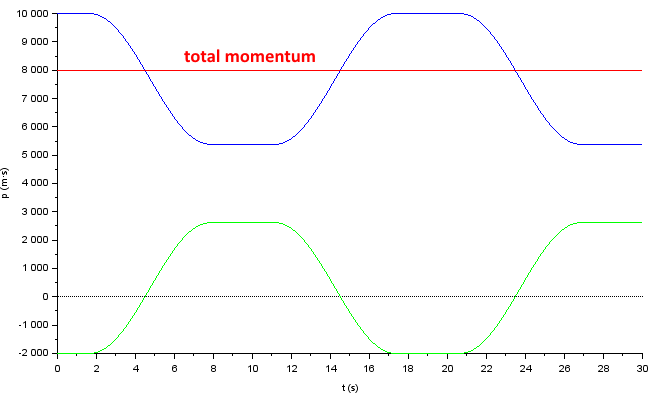 As everyone said, total momentum is always conserved. 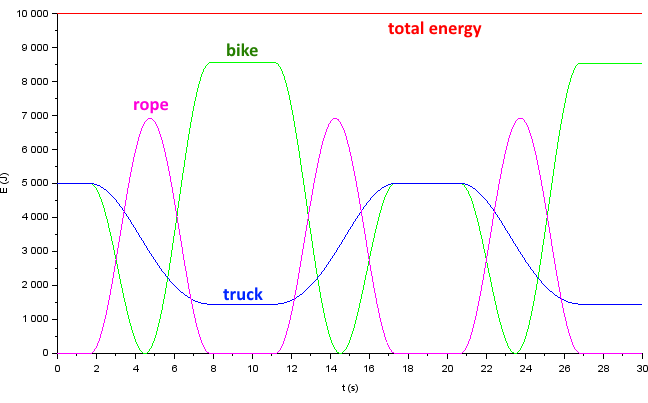 Some things are really interesting here, and they show how tricky it is to rely on energy instead of momentum for accounting of such situations.

Note: in an inelastic direct collision scenario, the graph would stop at ~4.75s, where vehicle speeds are equal (it's a bit after the bike's zero energy point; it would have ~100J of KE).

Note the deadband has appeared already. Signs must be handled with care.

Being $m_t$ the mass of the truck and $m_m$ the motorcycle's, we have:

Since I don't remember if I ever knew how to solve a system of ODE's analitically, I fired up Xcos (Scilab's former Scicos) and modeled it there. In case anyone's curious, here's how the diagram ended up. I can send the .zcos file if anyone wants it.

we can simply send another truck with the same mass and velocity in the opposite direction to collide with the first one, and both of them will stop because of the conservation of momentum.

If one assumes a totally inelastic collision then, by conservation of momentum, it is true that both trucks (objects) stop.

This requires that the initial kinetic energy of the objects is entirely converted to another form. The total change in kinetic energy equals the total work that is done during the collision process.

So, to be sure, work is done during the collision process since the trucks (objects) are, shall we say, permanently deformed.

I assume you know this already and have taken this into account.

If we assume that the rope can stretch, dissipating energy in the process, then we have the following results:

(1) eventually, the truck and motorcycle have the same velocity which is equal to

(2) the final kinetic energy is

so the work done (energy dissipated) by the rope is

A momentum-based analysis is the way to go for the motorcycle-rope-truck scenario.

In your kinetic energy argument, you are assuming that kinetic energies add like vectors. This is not the case.

If you want to properly apply a kinetic-energy-work argument, you need to think about the force $F$ that the rope exerts on the truck and the distance $d$ over which this force acts. Only by doing this will your momentum and kinetic energy methods agree on the answer. (Note that this ignores any energy-storing capability of the rope.)

The truck keeps going. Assuming the rope does not break, then the kinetic energy ends up in elastic potential energy in the rope. The rope will stretch. If you ask what happens if you assume a rope that cannot stretch, bzzt. No such thing. The rope will either stretch or break.

The motorcicle will reduce the speed of the truck a little bit, because of the work made by the tension of the rope. The motorcicle will also slow down and actually reverse direction until it is the same than that of the truck. At that point they all will keep moving at the same speed without interacting any longer (the rope tension is zero). Momentum is conserved and kinetic energy somehow dissipated, because it is not an elastic interaction (even if the rope is elastic, otherwise the system will keep oscillating back and forth, although moving forward as a whole, which is another possible answer, depending on your assumptions).

8
What causes damage, kinetic energy or momentum?
2
Calculating the energy needed to apply a force to an object

4
Definition of force, kinetic energy and momentum
8
What causes damage, kinetic energy or momentum?
0
Greater momentum than initial?
0
About kinetic energy
0
Conservation of kinetic energy in two dimensional elastic collisions
0
Same energies are transferred to 2 objects. But they gain different amounts of energy. Where is the mistake?
1
Energy loss caused by a negative work
1
Can velocity change without any component of acceleration in opposite direction of motion?