Why heavy elements don't sink to the core?

If earth assembled out of space dust, how come we find heavy elements like gold, silver, uranium and bunch of others that are heavier than iron on the surface?
I mean silicon (Si mass 28.084) being the crust makes perfect sense as it is lighter than iron (Fe mass 55.845).
Shouldn't heavy elements been sank by gravity to the 'bottom' of the Earth when it was only starting to become a planet 4.54 billion years ago?

The key to answering this question is the Goldschmidt classification of elements. Thirteen of the long-lived elements are siderophilic; they preferentially bind to iron. Those thirteen elements are significantly depleted in the Earth's crust compared to their prevalence on meteors, asteroids, and the Sun.

This list of thirteen does includes rhenium to gold, but it stops at gold. Eighteen of the long-lived elements are chalcophiles; they readily bind with a chalcogen other than oxygen (e.g., sulfur). Copper and silver, along with mercury to polonium fall in this category. These chalcophilic elements have a reduced tendency to migrate toward the center of the Earth because of their greater affinity for combining with lighter elements.

Actually, they are still currently sinking to the core. Earth's internal heat comes from a number of sources, and one of these is the release of gravitational energy from the heavy elements migrating further toward the center. A similar statement holds for other planets. This isn't the majority of the source of heat. Other sources are the original thermal inventory, and also radioactive decay. The intensified stratification of heavy elements toward the core and lighter elements toward the surface comprises a non-negligible source of heat, but still much smaller than those other sources.

However, this movement is generally happening in the mobile parts of Earth's center. Our planet's mantle has circulation currents, and I think we should call this a requirement for the separation process to happen. Of course the elements are significantly mixed together. It's only over very long time frames that the process happens.

Consider a lattice of atoms. With just about any material selection you make, the chemical bonds strength will vastly dwarf the buoyancy difference between different atoms of molecules. So we might wonder why the materials ever stratify, but this is because things get shaken up. Consider a pile of sand, where some grains are heavier. An undisturbed pile should have no tendency to stratify. However, if you shake it up for a long time, the heavy particles will move toward the bottom. The thermal flux from Earth's internal heat is the force that "shakes up" its elements.

Interestingly, the Earth's core and crust have their own unique reasons for being relatively stable... although not completely stable. The core has little thermal driving force behind it, because most of the heat production term comes from layers at larger radii. This promotes a very static state in the center. The crust is cooled to temperatures much lower than the interior, and generally rock is stable and solid here. Now both of these should come with a good deal of qualifiers. Obviously volcanoes shake up the crust, and the fact that I'm tying this exemplifies the fact that things do move on Earth's surface occasionally.

But exactly how stratified is Earth now? The density and gravity field strength follow directly from each other. It's not hard to get some data on this. 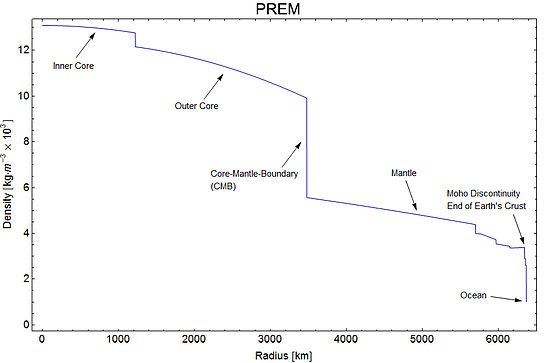 Here, you can see the density plotted over the Earth's radii. It is sloping very heavily, and the core is very dense, like Lead, but heavier. I find that impressive, but it could still get further stratified.

So let me present an alternative question: since the density of Uranium is around 19 g/cm3, why don't we get a pocket of pure Uranium at the center? Well there's just no mechanism to do that because nothing is shaking up the crust, and the driving force putters out to nothing toward the center.

Not the answer you're looking for? Browse other questions tagged newtonian-gravity earth physical-chemistry geophysics elements or ask your own question.

84
In the earth's crust, why is there far more uranium than gold?
1
Why the inner core of planet Earth is not composed of the densest materials?

27
Why the distribution of elements on Earth?
1
Does Earth produce metallic elements in its core?
7
Does gravity cause Archimedes' principle and how?
57
Are we slightly lighter during the day and slightly heavier at night, owing to the force of the Sun's gravity?
41
If the gravity at the center of the Earth is zero, why are heavy elements like iron there?
4
Nucleosynthesis: other than big bang and supernova
1
Why the inner core of planet Earth is not composed of the densest materials?
1
Does the inner core of the Earth drop?