Are there perfect elastic collisions in Nature?

Can we find at any level, molecules, atoms, particles etc., a perfect elastic collision? If not, what is second best?

EDIT: At macroscopic level what is the most elastic material and the highest CoR recorded? Do you know of a record of a longest bouncing ball on the floor?

At the (sub) atomic level, the two particles involved in a simple collision are the same two objects that can "heat up" and carry away the thermal energy. But since their motion is the motion of the center of mass, their collision is by definition elastic.

Now if the collision results in a rearranging of electrons in their orbitals, that argument may not hold: kinetic energy would be converted to a different type of energy. But that cannot happen at the level of subatomic particles (to the best of my knowledge), except at very high energies.

So I would say - for most elementary particles, at low energies, a large fraction of those collisions will be elastic. Note - I did not say all, since there is a probability of some excitation; but I think that a majority of these collisions would be perfectly elastic.

As for the updated question and the "search for the superball": this is tricky, because it takes two to tango in collisions (forgive the mixed metaphor). It's not enough to have a "super ball", you need a "super surface" too. An example of the importance of the surface characteristics is given in "The Effect of the Width of an Aluminum Plate on a Bouncing Steel Ball" - a description of experiments that demonstrate how the coefficient of restitution is a function of the distance from the point of impact to a clamp. A graph from this paper: 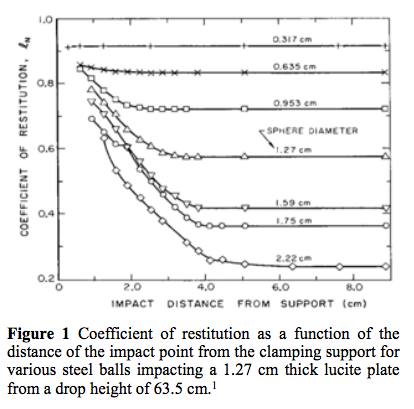 shows that just changing the geometry of the clamps holding the plate changes the coefficient of restitution by a significant amount (when the pressure wave from the impact has time to travel to the clamping point and back, more energy is returned to the ball - the plate undergoes less deflection and thus less loss). Unfortunately I have been able to find very little "good" scientific data on coefficients of restitution. It seems that among sports equipment, golf balls are the best (0.83); superballs (polybutdiene) can reach values of up to 0.90 - but their COR is highly temperature dependent.

You might find this earlier answer I wrote on the subject of bouncing balls interesting in this context - it describes some of the macroscopic factors that influence the observed coefficient of restitution for macroscopic objects.

I suspect that a diamond-on-diamond collision might result in higher COR than even a superball - because the greater the hardness, the smaller the contact area and thus the less friction-related losses. The other thing you can look for in your search for high COR collisions is sound attenuation, which would be an indication of losses (hysteresis) in the material during a pressure cycle. The less sound attenuation, the better the bounce.

Not the answer you're looking for? Browse other questions tagged collision or ask your own question.

-1
Is it possible to transfer kinetic energy from rigid body 1 to body 2 and conserve total kinetic energy?
17
Why does a ball bounce lower?
-1
Domain of different types of collision?

5
Moment of inertia of rotating particles in center of mass frame?
0
How do you make a collision more elastic?
5
Doubt in collision
0
Can momentum be conserved in a perfectly elastic collision?
2
Does the law of reflection hold for balls bouncing inelastically on inclined planes?
0
Why the lens is pushed to the right after light goes through?