For simple potentials like square wells and harmonic oscillators, one can explicitly calculate the product $\Delta x \Delta p$ for stationary states. When you do this, it turns out that higher energy levels have higher values of

Is this true for all time-independent potentials?

As Ron pointed out in the comments, this question is most interesting if we consider potentials with only a single local minimum, and increasing potential to the right of it and decreasing to the left.

The answer is no, and a counterexample is the following plateau potential:

A is imagined to be a huge constant, and k is a large constant, but not anywhere near as huge as A. The potential has a plateau between -A-k and -A, but is continuous and increasing on either side of the origin. It's loss of uncertainty happens when the energy reaches the Plateau value of $A^2$, and it happens semiclassically, so it happens for large quantum numbers.

Semiclassically, in the Bohr-Sommerfeld (WKB) approximation, the particle has the same eigenfunctions as the harmonic oscillator, until the energy equals $A^2$. At this point, the next eigenfunction oscillates around the minimum, then crawls at a very very slow speed along the plateau, reflects off the wall, and comes back very very slowly to the oscillator.

This argument uses the WKB expression for the expectation values of functions of x, which, from the WKB wavefunction,

Where v(x) is the classical velocity a particle would have at position x, and T is just a constant, a perverse way to parametrize the normalization constant of the WKB wavefunction. The expected value of any function of the X operator is equal to

Where the last integral is the integral around the full classical orbit. The last expression obviously works for functions of P (it works for any operator using the corresponding classical function on phase space). So the expectation value is just the average value of the quantity along the orbit, the factor of 2 disappears because you go over every x value twice along the orbit, and the strangely named normalization factor "T" is revealed to be the period of the classical orbit, because the average value of the unit operator is 1.

While when the particle is confined in the parabolic potential well, the local "ground state" corresponding to a Gaussian wave, the uncertainty is just $\hbar/2$. 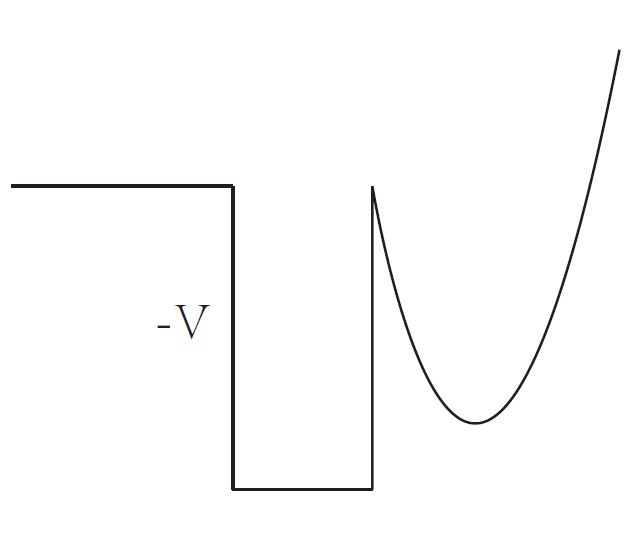 5
Is the ground state closest to the uncertainty relation?
2
Imaginary pertubation to a Hamiltonian: how is it the same as rotation to imaginary time?

4
Estimating minimum energy with uncertainty principle
0
Two Particle System with Identical Particles
2
Energy uncertainty in a general state
1
How to find the covariance matrix after a partial homodyne measurement?
0
Degenerate pertubation theory
0
How to antisymmetrize a wavefunction of two electrons?
1
Calculating the probability to find two bosons at the same place
0
Ground state of three non-interacting fermions at an infinite well
0
The overlap of two Slater determinant states