I am having problems thinking about Huygens construction when a wave front hits a surface and am looking for an intuitive / easy to understand answers of the following points consider the diagram bellow: 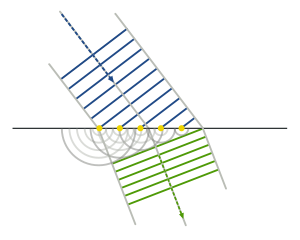 (A list of rules that we follow when a wave front hits a surfaces with Huygens construction would also be helpful) thanks.

You can create wavelets anywhere - the propagation of a wave is always represented by the Huygens construction.

You need to keep in mind the phase: it is usually convenient to draw a new wavelet starting at a boundary, and with a known phase, because then it's easy to draw a series of concentric circles with appropriate spacing (wavelength). If you draw circles that are not centered on a boundary you would have to know how to change their spacing - which is precisely what you are trying to avoid.

When you look at the construction you show (copied from wikipedia I believe - please attribute your source) you will see that different sets of grey circles have a different number of waves in them - since they originate from different crests of the incoming wave you are right in saying "the one on the left starts earlier", but then they drew an additional circle to compensate.

So the key is to draw as many concentric circles as is needed to make the outermost circles for each part of the construction in phase with each other.

See the figure below: I am "counting" the wave fronts, and then connect wave front #6 between the different sets of concentric circles. Not my best work but maybe good enough to see what is going on. 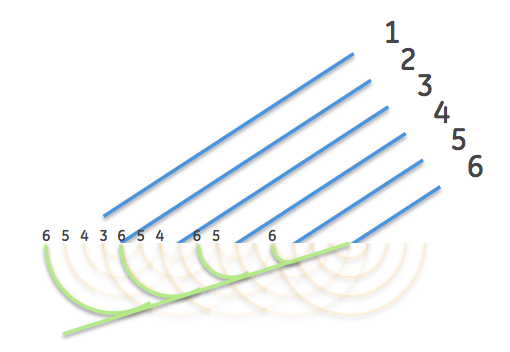 The leftmost set of circles intersects linear wavefront #2 - so you count circles 3,4,5,6. The next one intersects #3, so you count 4,5,6. Etcetera. Then you connect the sixes - I drew them in green to show them more clearly.

So to address the points in your question explicitly:

1) no they don't form a "completely new" wave, they show the evolution of the same wave over time.

2) when you draw new wavelets, it is convenient to draw them starting at a particular location - usually a boundary of some kind. But since the incident wavefront may arrive at different points of the boundary at different times, if you want to see the evolution of the wave you need to extend some wavelets for longer than others. This is what I tried to show in my diagram - the wavelet that is created at the point where crest #2 hits the boundary is extended by a full 4 wavelengths while the one that originates on the intersection of crest #4 and the boundary is only extended by two wavelengths.

3) once you have a wavelet, you can create a subsequent one by either extending the existing one by another wavelength (as I did in the above diagram), or by drawing another set of wavelets starting on the boundary. The latter is equally valid (and more true to the Huygens principle) but doesn't add any value - just complexity. It will lead to exactly the same result.

2
Huygens' Principle During Reflection: comparing wavelets from before reflection with wavelets from during reflection
24
Can light emit light?
18
How does Huygens Principle incorporate the unidirectional property of a traveling wave?
1
Is there any limit to distance between two waves when used in Huygens principle?
1
Diffraction according to Huygens principle - struggling with the concept of diffraction being caused by small point source wavelets
0
Why are diffracted wave fronts drawn with curved edges in textbook diagrams, when according to Huygen's principle they should be straight lines?
2
What is meant by secondary wavelets?
8
How does the Huygens–Fresnel principle apply to diffraction?
2
Huygens' Principle alternative explanation on reflection