How can area be a vector?

My professor told me recently that Area is a vector. A Google search gave me the following definition for a vector:

Noun: A quantity having direction as well as magnitude, esp. as determining the position of one point in space relative to another.

My question is - what is the direction of area? I can relate to the fact that velocity is a vector. The velocity of a moving motorbike for example, has a definite direction as well as a definite magnitude assuming that the bike is moving in a straight line & not accelerating.

My friend gave me this explanation for the direction of Area vector. Consider a rectangular plane in space. He argued that the orientation of the plane in space can only be described by considering area as a vector & not a scalar.

I still wasn't convinced. Suppose the plane was placed such that its faces were perpendicular to the directions, North & South for example. Now the orientation of the plane is the same irrespective whether the so called vector points to north or to the south. Further what is the direction of a sphere's area?

Does considering area as a vector have any real significance? Please explain.

This might be more of a math question. This is a peculiar thing about three-dimensional space. Note that in three dimensions, an area such as a plane is a two dimensional subspace. On a sheet of paper you only need two numbers to unambiguously denote a point.

Now imagine standing on the sheet of paper, the direction your head points to will always be a way to know how this plane is oriented in space. This is called the "normal" vector to this plane, it is at a right angle to the plane. 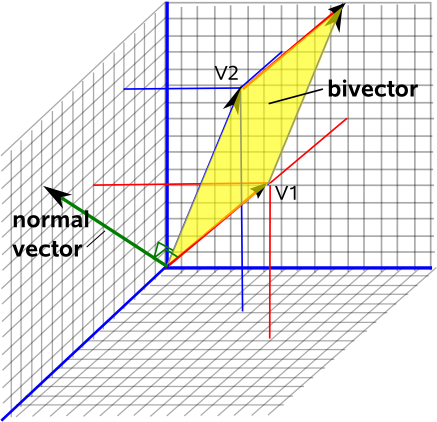 Mathematically, you can express this by the "cross product" $$\vec c=\vec a\times\vec b$$ whose magnitude is defined as $|c| = |a||b|sin\theta$ which is equal to the area of the parallelogram that those two vectors (which really define a plane) span. To steal this picture from wikipedia's article on the cross product: 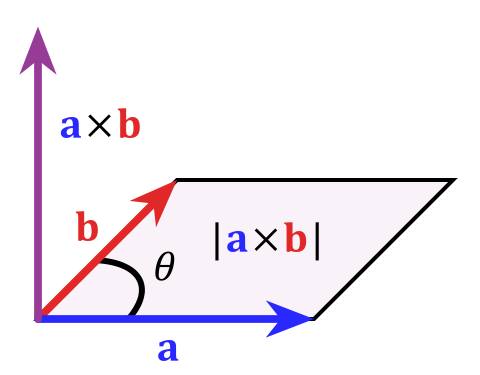 As I said in the beginning this is a very special thing for three dimensions, in higher dimensions, it doesn't work as neatly for various reasons. If you want to learn more about this topic a keyword would be "exterior algebra"

As for the physical significance of this concept, prominent examples are vector fields flowing through surfaces. Take a circular wire. This circle can be oriented in various ways in 3D. If you have an external magnetic field, you might know that this can induce an electric current, proportional to the rate of change of the amount flowing through the circle (think of this as how much the arrows perforate the area). If the magnetic field vectors are parallel to the circle (and thus orthogonal to its normal vector) they do not "perforate" the area at all, so the flow through this area is zero. On the other hand, if the field vectors are orthogonal to the plane (i.e. parallel to the normal), the maximally "perforate" this area and the flow is maximal.

if you change the orientation of between those two states you can get electrical current.

The main regime of use is when an area is infinitesimally small, like one would use in an integral. In that case, we can easily see that it is flat, and the shape doesn't really matter. In which case, we can encode the information as a vector, with the magnitude representing the (scalar) area; the choice (as you noticed) of pointing out of any given side is exactly that --- a choice --- but one that can be made consistently. We can extend this to non-infinitesimal planes, but it doesn't work that well for curved surfaces.

To be precise, what you really want is a co-vector. This is an abstract gadget which takes a vector and spits out a scalar. For a plane, you want this to represent the "amount" of the vector that goes through the plane --- so it should be linear in the vector (doubling the vector doubles the output) and it should take into account the angle at which the vector hits it (gives a factor of $\cos$). Now, we can ask the question of how to represent this abstract co-vector, and it turns out that a vector is a good idea! Specifically, we can represent the action as taking the dot product, which naturally encodes the linearity and the cosine. Now, in general, this happens to have the same number of dimensions as a proper vector, but this only encodes an area (a 2D surface) in 3D --- in 2D you would get a line, in 4D a volume (yes! A 4-vector intersects a volume at one point!).

If you want to learn more about this sort of thing, you want to investigate differential geometry, where all it is necessary to be clear about this sort of thing and not mix up vectors and co-vectors (called forms in that field). A good readable reference is Gauge Fields, Knots and Gravity which starts from a basic overview of the mathematics and develops it for physical use.

Think of Force is Pressure times Area ($F = P\cdot A$). You know pressure is a scalar (there is no direction associated with it), and a force is a vector (it acts along an axis). So what does that mean for pressure.

The direction of the force is normal to the area, and its magnitude is proportional to the size of the area. This is why an infinitesimal area ${\rm d} A$ can be a vector. It is convenient to think of (vector)=(scalar)*(vector).

There is an especially picturesque example of the Law of Pythagors in three dimensions applied to the areas of a simplex. (Where by "simplex" I believe I mean a section of space bounded by three orthogonal planes and one arbitrary plane.) The sum of the squares (of the areas) of the three small faces are equal to the square of the area of the oblique face. It is easily explained by the pressure/flow type arguments put forward in the other answers posted here, plus the obvious physical condition that an undisturbed fluid is in equilibrium with itself.

Not the answer you're looking for? Browse other questions tagged mathematics vectors or ask your own question.

1
infinitesimal areas and large areas scalar or vector quantities?
1
Why is area a vector and not a scalar
2
What is the Direction of area vector?
4
Is length/distance a vector?
3
How can the area be a vector in the equation $\Phi=BA\cosθ$

1
Gauss' Law and area vector
0
Bullet interception?
0
Area as a vector
0
How to specify the orientation of an area vector?
13
Can we divide a vector by another vector? How about this: $a = vdv/dx?$
1
Is this vector diagram of the forces at play in turning flight correct?
3
How can the area be a vector in the equation $\Phi=BA\cosθ$
1
Right way to define vectors under Galilean transformations?