But in quantum mechanics, based on Schrödinger's equation, one can show that we have a quadratic relation between the two :

The wave mechanics dispersion relation you cite is for EM waves propagating in free space. In other media, the dispersion relation is not necessarily linear (it can be quadratic or have some more complex dependence). So in this context, there's nothing special about quantum mechanics.

More generally, the dispersion relation tells us about the phase speed of the wave and the group velocity:

So for example, in contrast to EM waves in free space, the particular quantum dispersion relation you cite will have a group velocity that depends on the wavenumber. The quantum mechanics interpretation of this is that the particle's momentum will depend on its wavenumber ($p = \hbar k$).

That the phase speed can have a dependence on the wavelength/frequency of the wave. For instance, a whistler mode wave can have a cubic dispersion relation at low frequencies. In this limit, the higher(smaller) frequencies(wavelengths) propagate faster than the converse. It results in a sort of "spreading out" of the wave modes. This if often seen upstream of collisionless magnetized shocks in space.

For instance, see the image below, modified from an figure in Krauss-Varban and Omidi, [1991]: 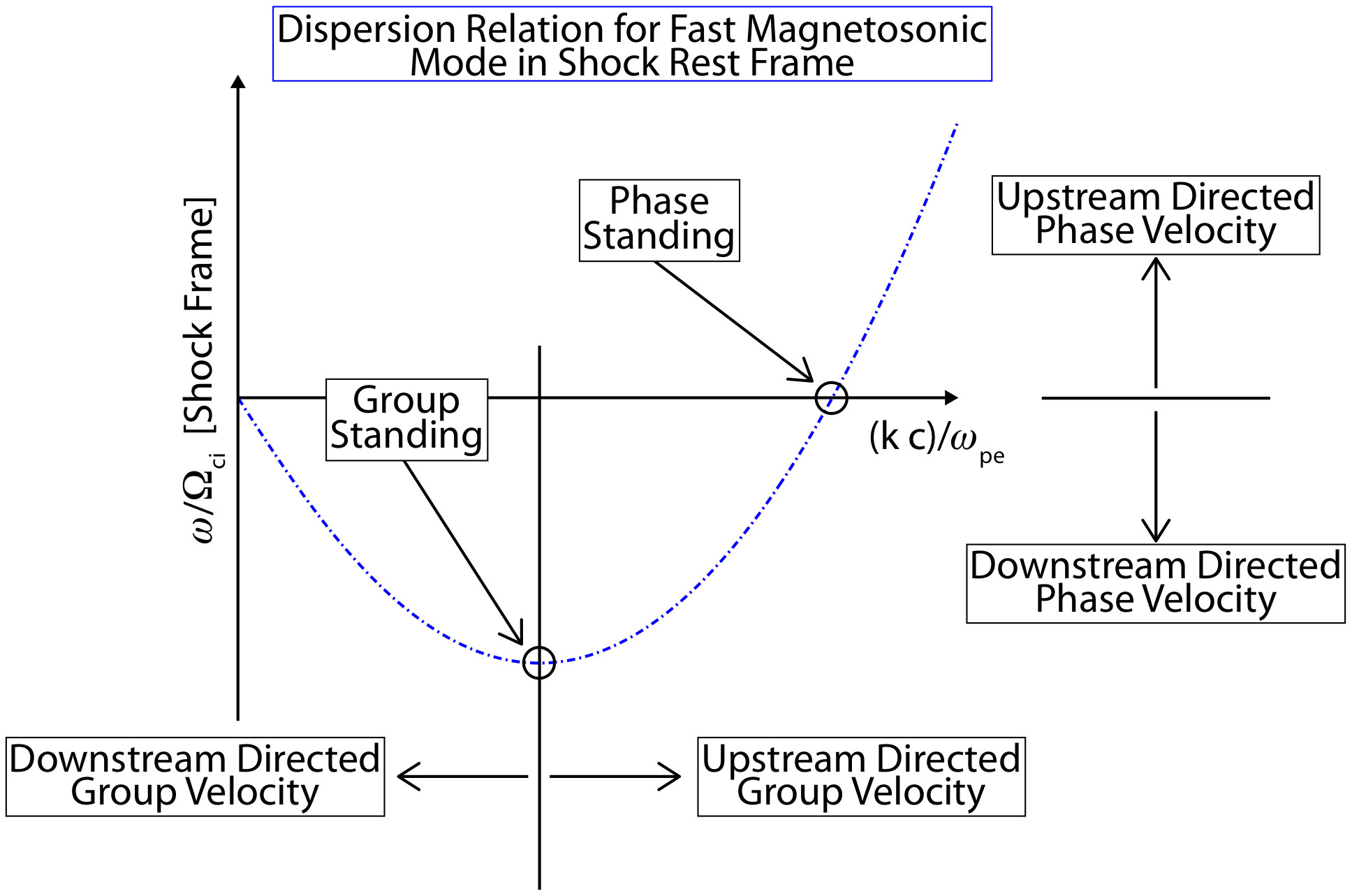 The $\omega$ vs. $\kappa$ diagram has been Doppler-shifted into a shock rest frame for this specific example, but it should illustrate my point. Where the frequency goes to zero on this plot corresponds to a phase-standing mode (i.e., zero phase velocity) in this frame of reference. In another frame, the same mode would have a finite phase velocity. Where the slope of the blue line goes to zero, the wave's group velocity is zero (or group standing).

Not the answer you're looking for? Browse other questions tagged quantum-mechanics electromagnetic-radiation waves wavefunction dispersion or ask your own question.

4
Connection between a simple matter wave and Heisenberg's uncertainty relation
3
Are acoustic phonon frequencies always linear in $k$?
5
Understanding the Plasmon dispersion relation to first approximation
3
How to understand the difference of spin wave excitation for ferromagnetism (quadratic dispersion) and anti-ferromagnetism (linear dispersion)?
1
Do terms like 'radiowave', 'ultraviolet', 'X-ray' mean the same thing in matter vs in vacuum/air?
0
Why are wavefunctions in Quantum Mechanics shown as complex Circular waves instead of real Planar waves?
2
Diffusion and dispersion relation
1
Phase velocity, Group velocity and group velocity dispersion (GVD)
0
Why do wave equations produce single- or few- valued dispersion relations? Why no continuum of possible $\omega$ for one $|\boldsymbol{k}|$?