What happens to waves when they hit smaller apertures than their wavelenghts?

I was wondering this for quite a long time now. Let's say you have a water wave (like ripples, not the ones you see during tsunamis) with wavelength 10 m. Imagine you put a boundary with an opening of 1 m. Will diffraction be observed? According to my research, no. But, then, what would be seen?

I hope you'll find this paper useful: J Weiner, Rep. Prog. Phys. 72 (2009) 064401. Although it mainly discusses light waves, the idea (and even the results) may be generic. For very small apertures (sub-wavelength apertures), strong reflection is expected to happen. According to Bethe's theory of light transmission through small holes, the transmission scales as $(a/\lambda)^4$, with $a$ the size of the hole and $\lambda$ the wavelength. In mesoscopic physics, there is a structure called 'quantum point contact' (QPC), which acts in similar way. Roughly, the transmission is extremely small when electronic wavelength far exceeds the QPC dimension.

This problem is intimately bound up with tunnelling (wholly analogous to quantum tunnelling) and evanescent waves. The results you get from analyses like those below depend critically on how one assumes the hole interacts with the incident field.

I shall look at the problem with scalar optical theory, which is analogous to sound waves, or acoustics: Helmholtz's equation is presumed to prevail. This will not be exactly the same as surface water waves, but I think it is instructive to look at the attenuation that a small hole imposes on a Helmholtz-fulfilling field. Helmholtz's equation is the time-harmonic form of the D'Alembert Wave equation.

Let us first that the wave screen is perfectly reflecting, or infinitely absorbing, so that, even though the screen may be infinitely thin, on the output side of the hole the boundary conditions are (we use polar co-ordinates in the transverse plane):

i.e. we simply assume a straight screening off of the field and there is negligible reaction field (e.g. generated in a conductive screen).

What happens here if you analyse the problem is detail (see my appendix) is that the form of the farfield variation with position is almost exactly what Huygens's principle would tell us: the small hole looks exactly like a point source (with a dipole radiation field shape). What Huygens's principle will not tell us, however, is the scaling constant for this variation. The amplitude of the farfield (if I've done a stationary phase integral right) is

where $R$ is the distance from the hole, $\theta$ the colatitude (spherical $\theta$ co-ordinate) and $\lambda$ the wavelength.

Let's first look at how valid Huygens's principle is. The rigorous grounding of this principle is the Kirchoff diffraction integral (Born and Wolf, "Principles of Optics", Sixth Edition, §8.3)

for the scalar field $\psi\left(\mathbf{r}\right)$ within a volume $V$ in terms of its values and normal derivatives $\nabla \psi\left(\mathbf{u}\right) \cdot \hat{\mathbf{n}}\left(\mathbf{u}\right)$ on the boundary $\partial\,V$ of this volume. We need to assume reasonable values for the boundary: Huygens's principle can be shown (in Born and Wolf §8.3 for example) to result when we assume the values of the field and its normal derivatives at holes in a screen are equal to the values that would prevail without the screen there. If the holes are of a reasonable size, this is a good approximation. However, amongst other things, the introduction of the screen distorts the values of the normal derivatives severely at the edges of holes. This is not a problem for big holes: the error term is dwarfed by the contribution from the hole itself. However, this assumption most certainly goes awry for subwavelength holes.

So Huygens, whilst telling is the general character of the field passing through the hole, cannot tell us the fine details. Indeed, not all the power incident on the hole passes through it. In a scalar theory, the reason for this is the evanescent field. A full Maxwell theory for e.g. a perfectly conducting screen, also shows the presence of the evanescent field, but furthermore that this evanescent field is set up as a result of a back reflexion of some of the power incident on the hole. A nice Maxwellian analysis to give intuition for what is going on here is of a perfectly conducting screen, with a hole of a nonzero thickness. In this case, the hole is like a cylindrical waveguide with conducting boundaries. Such a waveguide can cut off all its modes and make them evanescent. So, propagating power is output from the other side of the screen by dint of tunnelling: enough of the evanescent mode reaches the other side to become a propagating wave again. The modes of a cylindrical waveguide vary like:

since $d<<\lambda$. Here $\omega_n$ is the $n^{th}$ zero of the Bessel function $J_0$: the slowest dwindling field is the one corresponding to $\omega_1 \approx 2.405$. So now we have an expression for how much power gets through a small hole as a function of how thick the conductive screen is: it is:

where $t$ is the screen's thickness. This formula lets us see how thick we need to make a mesh in a microwave oven, for example, so as to quell the microwaves within the oven to a safe level for the hungry animal outside gawking in there for his dinner to be ready (and in so doing, exposing the most microwave-vulnerable part of his body - the eyes - to the show).

What are these weird creatures, these evanescent waves? Let's go back to the perfectly absorbing, zero thickness screen.

The Cartesian components of our EM field fulfil the Helmholtz equation, therefore, if the field comprises only plane waves in the positive $z$ direction, our algorithm for analysis of propagation is:

In our simple, circularly symmetric problem, we can use zeroth order Hankel transforms instead: the "prototype" radially symmetric solution to Helmholtz's equation is:

where $k_\perp$ is the transverse component of the wavevector (this "prototype" solution is actually the sum of all the plane waves with different $k_x,\,k_y$ in (1) whose transverse wavevector is $k_\perp=\sqrt{k_x^2+k_y^2}$). So (1) becomes:

Now of course the weight function $\Psi(k_\perp) = \frac{d}{2\, k_\perp}\,J_1\left(\frac{d\, k_\perp}{2}\right)$ does not have a compact support: it is nonzero for values of $k_\perp>k$. The superposition components for which hese of course lead to a $z$ variation in our prototype Helmholtz equation solution (2) and in the first equation of (3) given by $\exp\left(i\,\sqrt{k^2-k_\perp^2}\,z\right) = \exp(-\sqrt{k_\perp^2-k}\,z)$ which are thus swiftly attenuated with increasing $z$. These are the evanescent waves, they represent inductive and capacitive nonpropagating stores of energy that stay "bound" to the screen. They give rise to the so-called "near field" (warning: take heed that I use this term to mean strictly the evanescent field: this term is used differently in connexion with Fresnel refraction, which deals wholly with propagating, non-evanescent fields).

However, there is still a propagating, free photon component of the field left over when $z\to\infty$ and the evanescent fields have vanished:

What you have to imagine is the fact, that waves when are (ideally) reflected from a wall lead to a standing wave. If in the wall is a tiny slit the components of the reflected waves left and right the slit dissipate in the direction of the slit (spherical waves in each point according to Huygens description). These components undermine the incoming wave at the slits position but not lead to a standing wave. So a little part of energy of the incoming wave goes inside the slit.

What happens there is the next dissipation prozess. We have to imagine that dissipation is always present in deep water (or you get some reflection from the ground). So the wave's energy in the tiny slit is fading very fast due to the small energy that could be transferred from the difference of the incoming and reflected waves. Then thinner the wall then less of the waves energy is fading.

As you pointed out the the size ratio between the wavelength and the slits wide is one of the reasons for does more or less of an incoming wave goes through this slit. The second reason is the thickness of the wall in the position of the slit.

I cannot speak for how to match with a mechanical resonator but you can match arbitrarily well any EM radiator that is small relative to its wavelength at one (1) frequency. This means that the radiator (loop or dipole, monopole, etc.) will absorb all radiation coming from directions in which it can radiate as a source without any reflection. The rest is diffracted. All elementary dipoles, be they electric or magnetic, are limited by bandwidth and not the ability of radiating if matched properly by some finite set of inductors and capacitors, and because of reciprocity this property also holds in receiver as well as transmitting antennas.

Well - it depends what you mean by "diffraction".

Any point along a wave front will act as a point source of wavefronts travelling radially outwards - so while a plane wave will be arriving at the aperture, the waves that come out from the other side will almost look circular.

To me, that's diffraction. Although there will be no regions where extinction occurs in the way that this would happen for wider apertures.

Here is a picture that describes what I'm talking about: 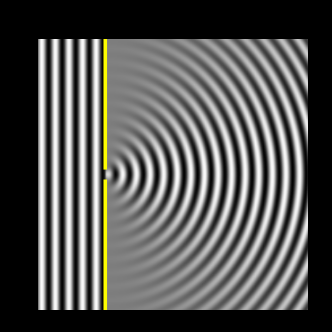 See also this gif for an animated version

Note that the above holds for an insulating hole. When you have an electromagnetic wave incident on a hole in a conductor, the situation changes as the induced currents in the edge of the hole play a significant role in shaping the transmitted radiation. As shown in the Bethe paper referenced by Ben Crowell, the transmission in that case (for a small, $r\lt\lambda$ circular hole in a perfect conductor) falls off quickly with hole size - it scales with $(r/\lambda)^4$ instead, as you might expect, with $(r/\lambda)^2$.

But your question was about waves on water - so you don't have to worry about the electromagnetic case.

http://www.nature.com/nature/journal/v445/n7123/box/nature05350_BX1.html You can find a complete answer in above link.The theory which is introduced can be valid for mechanical waves such acoustic and water waves.

Not the answer you're looking for? Browse other questions tagged waves diffraction or ask your own question.

9
Is a soundproofed wall really only as strong as its weakest area?
15
Relationship between slit size and wavelength in diffraction
1
Huygen's principle and why can't we see atoms with light
3
What happens to the probability wave of a particle after it goes into a black hole?
0
Directionality of sound depending on emitter size and wavelength
0
Do particles go into the 4th dimension in 3d waves?
5
Why does light behave like a wave?