If one of the rules to be a planet is that it needs to clear ALL objects from their orbit, does this also make Neptune a non-planet? Since it has thus far failed to clear Pluto from it's orbit. Or does this rule not really apply to planets and we should welcome Pluto and a few other dwarf planets into our family of planets?

If one of the rules to be a planet is that it needs to clear ALL objects from their orbit, does this also make Neptune a non-planet?

This is a somewhat common misconception of the meaning of the term "clearing the neighborhood". None of the planets could be called "planets" if clearing ALL objects from the vicinity of the orbit was what that term meant. Instead, that term takes on a slightly fuzzier (but still very sharp) meaning, has a body cleared most of the junk from its orbit, and if it hasn't, can it do so before the Sun burns out? If so, it's a planet. If not, it's not a planet.

The ratio of the square of an object's mass to its orbital period turns out to be key in determining the ability of the object can reasonably clear its orbit of the bulk of other stuff orbiting nearby. A log-log plot of mass versus period (or semi major axis) shows a huge gap between the planets and dwarf planets in this regard. The figure below, taken from http://mel.ess.ucla.edu/jlm/epo/planet/planet.html, depicts this huge gap.

The dashed line in the middle of the huge gap between Mercury and Mars versus Ceres, Pluto, and Eris represents objects that could "clear their neighborhood" in a Hubble time, or 13.8 billion years. Mercury and Mars lie 1.5 orders of magnitude above this line. The planets "cleared the neighborhood" long ago. Ceres, Pluto, and Eris on the other hand lie an order of magnitude below that Hubble time line. The Sun will become a red giant and then fade toward nothingness and the dwarf planets still won't have cleared the neighborhood of their orbits. 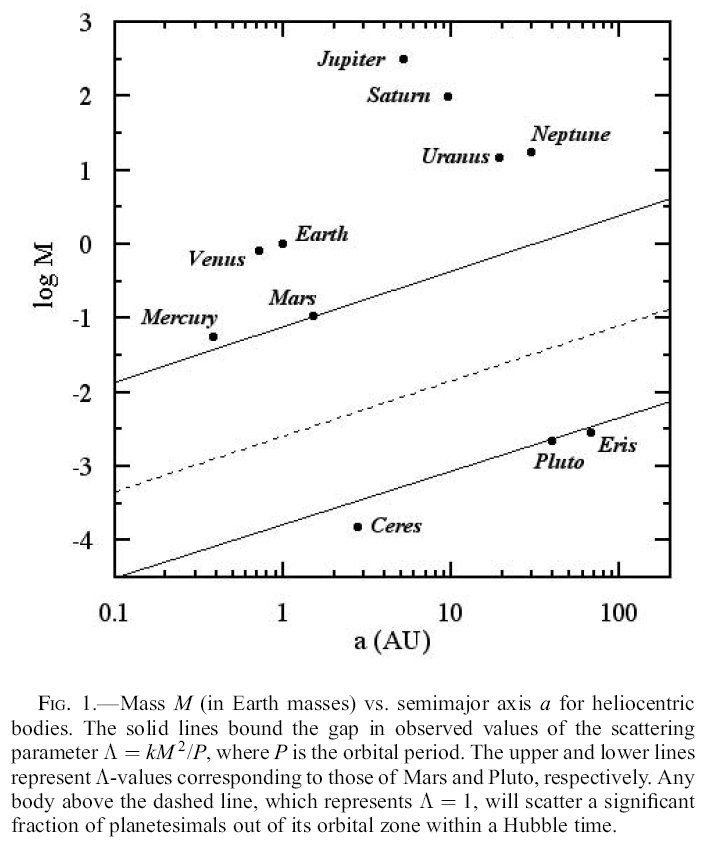 The astronomy community faced two crises with regard to what constitutes a "planet", first in the mid 19th century, and more recently at the start of the 21st century. The first crisis involved the asteroids. The second involved trans-Neptunian objects. Both crises challenged astronomers to question what a "planet" was.

1 Ceres, 2 Pallas, 3 Juno, and 4 Vesta were discovered in quick succession during the first decade of the 19th century. There was no international astronomical organization at the time of these discoveries; the International Astronomical Union wouldn't be formed for another century. Instead, the designation of what constituted a "planet" fell on the major astronomical almanacs such as the Berliner Astronomisches Jahrbuch (BAJ). Those discoveries at the start of the 19th century were treated as newly discovered "planets". This situation remained static for about 40 years.

That changed in 1845 with the discovery of 5 Astraea. During the 1850s, the list of objects orbiting the Sun grew to 50, and during the 1860s, the list grew to over 100. The response of the BAJ and others was to demote Ceres, Pallas, Juno, and Vesta from planethood status to some lesser status, either minor planet or asteroid. Astronomers didn't have a clear-cut concept of what constituted a planet other than that they should somehow be large. Ceres, the largest of the bunch, is not very large. The end result of all of these discoveries starting in 1845 was that the first four discovered asteroids were demoted from planethood status.

The second crisis started in 1992 with the discovery of (15760) 1992 QB1. By 2006, the number of trans-Neptunian objects had grown significantly. Were these things "planets", or something else? Some astronomers, notably Alan Stern, wanted the term "planet" to be extremely inclusive. Most astronomers balked at this idea.

Paradoxically, it was Alan Stern himself, along with Harold Levison, who provided the key criterion of "clearing the neighborhood" that lies at the heart of what the IAU deems to constitute a "planet." Their paper, Stern and Levison, "Regarding the criteria for planethood and proposed planetary classification schemes," Highlights of Astronomy 12 (2002): 205-213 suggested splitting "planet" into two categories, the "überplanets" (Mercury, Venus, Earth, Mars, Jupiter, Saturn, Uranus, and Neptune) and the "unterplanets" (Pluto+Charon, Eris, Ceres, Sedna, and a host of others).

The only difference between the proposal by Stern and Levison versus the voted-upon IAU resolution is that while Stern and Levison wanted to designate hundreds (and perhaps thousands) of objects as "planets" (eight "überplanets" and a boatload of "unterplanets"), the IAU chose to split those orbiting objects into the mutually exclusive categories of "planets" and "dwarf planets". This is consistent with how astronomers dealt with that first crisis. Planets should be "large." Stern and Levison provided the necessary ammunition to distinguish large from not so large.

Finally, a perhaps too-chatty analogy I made in chat. When you sweep your kitchen floor do you get it clean enough to eat off of, or just "good enough"? The concept of "clearing the neighborhood" as embodied in the paper by Stern and Levison does not mean getting the floor clean enough to eat off of. It doesn't quite even mean "good enough". It's more along the lines of "is it possible"?

Suppose you are charged with cleaning the football field of the LA Coliseum and your boss lets you use a Zamboni-sized machine to do the cleanup. That's Jupiter. It cleaned it's neighborhood in short order. Suppose on the other you are charged with sweeping the entirety of the LA Coliseum clean all by your lonesome, stands and all, and the only tool you get to use is a tiny little barber's brush. You'll never get the job done. That's Pluto. It can never get the job done. Pluto is not a planet.

Neptune actually is the dominant gravitational force in the region of the Kuiper belt in which Pluto resides. In fact, if you look at the image below, the belt is being cleared out by Neptune: 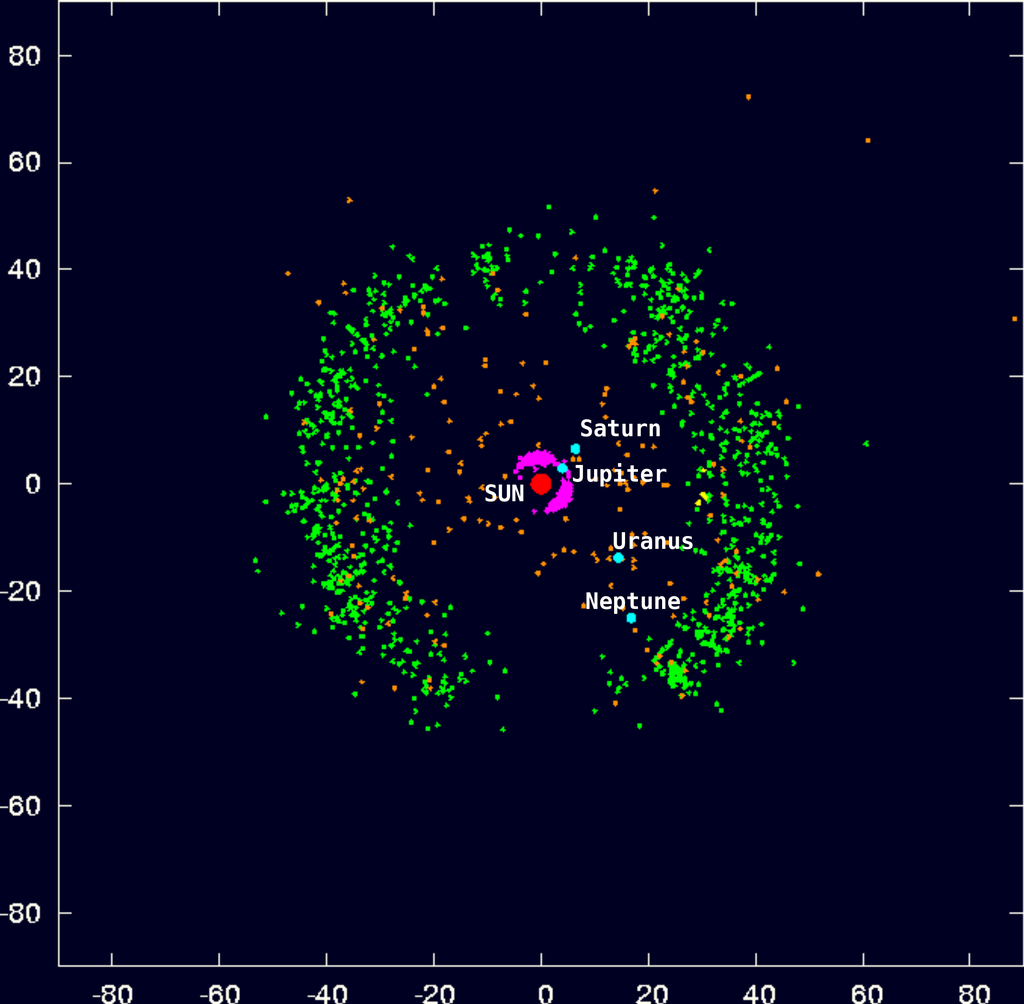 In fact, there is a class of objects, suitably named the plutinos, that have been captured by Neptune. Solar system models have actually shown that Neptune was formed much closer to the Sun than it is presently, and in drifting outwards, it has pushed these plutinos out.

The key trait about the plutinos is that they have an orbital resonance with Neptune. Here, orbital resonance is the effect where two objects exert periodic gravitational force on one another. In the case of the plutinos, they all have an average resonance of 2:3 (they orbit the Sun twice for every three orbits of Neptune)--in fact, Pluto was the first object that this resonance was first noticed. This resonance developed because Neptune pushed the plutino objects outwards as it migrated further from the Sun (i.e., as the dominant gravitational body, clearing the path).

"To clear an orbit" has a specific meaning which may not entirely intuitive. "Clearing an orbit" specifically does not mean emptying an orbit of all other bodies. It means the planet gravitationally dominates other bodies at approximately the same distance to the sun.

Now you can wonder perhaps whether Neptune dominates Pluto or Pluto dominates Neptune. That would appear somewhat symmetrical. This can be judged by the square of their mass ratio, as the mass influences both the gravitational pull (more mass is higher force) and resulting acceleration (less mass is higher acceleration). Now, the masses of Pluto and Neptune differ by about a factor of 10.000 so the squared ratio is about 100.000.000. That's unambiguous: Pluto's orbit is defined my Neptune's orbit and not vice versa.

Not the answer you're looking for? Browse other questions tagged terminology planets solar-system or ask your own question.

9
What is the official difference between a planet and a dwarf planet?
1
Is it possible for a solar system to have planets orbiting the star(s) in a spherical pattern?
0
Anomalous orbit of pluto

5
Are orbits interior to Jupiter's orbit less stable than orbits exterior to Jupiter's orbit?
6
Correlation between speed, distance, mass, etc between a planet and a star (or moon and planet)?
10
What if the Moon was 100x more massive: Binary planets?
6
How does Planet 9's perihelion and aphelion affect the Kuiper belt objects?
2
What are the gravitational binding energies of giant planets?
4
Why do all the planets and stars in our solar system have such similar average densities?
0
Winds on gas giant planets: Would they increase if closer to their star?