Effect of movements of astronauts on International Space Station

I know that astronauts move in and around in ISS. When they move they also touch the modules of ISS and sometimes they apply force on the module to move. When this happens, as far as I know it affects the space station. Is it real? If real how do they solve it?

In principle there is an effect, but firstly it's tiny and secondly it averages to zero.

The mass of the ISS is about 420 tonnes, or about 5000 times the mass of an astronaut. That means if an astronaut pushes themselves off a wall at 1 m/sec the ISS moves in the other direction at about 0.0002 m/sec. But the ISS isn't very large so after only a couple of seconds the astronaut hits the opposing wall and this stops the ISS moving. The ISS will have moved about half a millimeter as a result, but when the astronaut moves back to the wall they started from the ISS moves back as well. Over time the position of the ISS averages out to a constant value.

Though I don't have figures for it I would guess that inhomogeneities in the Earth's gravitational field are the main source of sporadic movements. There is also a gradual position change due to atmospheric drag (the atmosphere is this at 300km but it's still thick enough to produce a significant drag). The ISS uses about 7 tonnes of fuel a year maintaining its altitude.

The astronauts do have a potentially deleterious affect on the vibrational environment on the International Space Station. They have to exercise multiple hours a day to keep bone and muscle loss down to a tolerable minimum. The unmitigated vibrations from all that exercising would be harmful to very sensitive micro-g experiments.

Before I get to the mitigation, there's an interesting background story on the utility of online polls. In 2009, NASA was about to add what was tentatively called Node 3 to the station. NASA wanted a more memorable name, so they created an online poll by which people could vote for names suggested by NASA. Participants could also write-in a name if they didn't like NASA's suggestions. That poll was hijacked. The first hijack was by the small but dedicated fan base of a US science fiction show. One of NASA's suggested names was Serenity happened to be the name of the spaceship on that show. The second and most successful hijack was by Stephen Colbert, host of a popular comedy / faux news show. He exhorted his audience to vote for Colbert. NASA wasn't exactly thrilled that Colbert won. They named the module Tranquility. NASA did however honor Colbert with a device named after him. 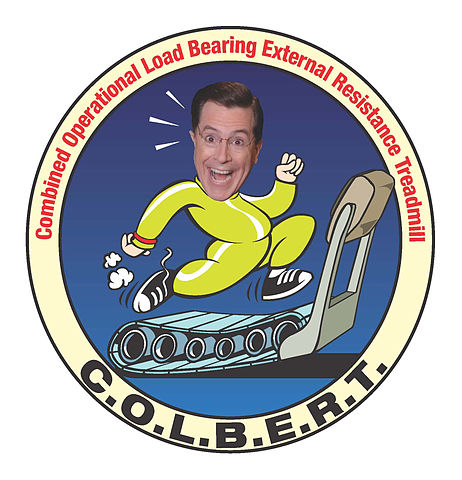 Non-exercise motion by the astronauts adds to the vibration environment. In addition to the astronauts themselves, there's a good number of motors and other vibration-inducing machinery on the station that keeps the station a livable and usable place. The Station gets buffeted a bit by the upper atmosphere, and this too induces vibrations. The Station goes in and out of darkness every 90 minutes. This creates temporary thermal stresses the astronauts can hear. The Station occasionally has to reboost, which temporarily destroys the low and high frequency micro-g environment. Movements of the robotic arms induce vibrations, particularly if there's a massive payload on the end of the arm. Finally, visiting vehicles rendezvous with and depart from the Station.

Not the answer you're looking for? Browse other questions tagged newtonian-mechanics forces momentum reference-frames conservation-laws or ask your own question.

4
Artificial Gravity - Spinning Station Questions
24
Gravity on the International Space Station
7
If a space ship accelerated constantly, would its astronauts constantly feel the forward movement?
3
If an astronaut had stationed in International Space Station for the duration of mission, 17 years, would he be older?
59
Why would a spinning space station create a centrifugal force on an astronaut rather than simply spinning around him/her?
1
If the moon also fall then why can the astronaut moonwalks?
0
Could running around a space station increase the spin even after the runner stops?
2
Why don't we ever see astronauts on space walks adjusting their orientation by rotating their arms?
3
Astronauts being able to move "heavier" objects easily in space