How did Newton establish his famous third law of motion?

For every action,there is equal and opposite reaction . This is the famous Newton's third law of motion. But how did he come to this conclusion? We can prove 2nd law using calculus. But how did Newton prove this law? Or did he just used practical examples?

[According to me, it may be due to conservation of energy,but did Newton use this?]

This page has a helpful summary of the history--it seems he initially accepted the Aristotelian idea that objects could only continue to move if some "force" inside them was moving them (keep in mind this is before his technical definition of 'force'), and it took him a while to switch to the idea that bodies naturally tend to keep moving unless acted on by a force, i.e. inertia (it seems he got this idea from Galileo and Descartes). After this he developed the concept that "force" must be acting whenever there is a change in motion, i.e. an acceleration. From there, the article suggests he got the idea for the third law from various mechanical experiments in which it could be observed that the total momentum always remained constant (and if you define force as mass*acceleration, conservation of momentum implies that forces must always be equal and opposite):

Continuing his investigation of impact, he analyzed a collision between two bodies of unequal mass in the center of gravity frame of reference. He stated that they had “equal motions” in this frame, both before and after the collision. This could only mean mass×speed, or momentum (equal and opposite, of course)—the Third Law. (He realized and stated that during such a collision, the center of mass itself would move at a steady speed.)

A Third Law Experiment with Pendulums

In fact, there is a Third Law experiment in the Principia, in the second Scholium, right after the Laws of Motion and their Corollaries. He collided together two pendulums (about ten feet long) with different masses, to establish that the impacts (i.e. forces) felt by them were equal and opposite, as measured by how far they rebounded.

He went to considerable trouble to account properly for air resistance and imperfect elasticity. 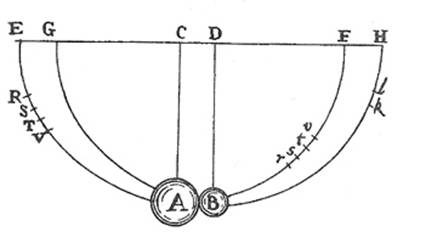