This question about whether or not it is possible to focus black-body radiation to make something hotter than the radiation's source was answered mostly negative: the second law of thermodynamics and/or the fact that etendue cannot be reduced are the reasons named.

Take an infinitely (or sufficiently) large plate as black-body radiator at temperature $T_r$. You have a power source available which is able to hold the plate's temperature constantly at this arbitrary chosen temperature.

Place a perfect parabolic mirror with its symmetry axis parallel to the plate's normal, opening toward the radiator, so that much light is focused in the focal point. If you now place a perfect black-body sphere with temperature $T_s<T_r$ at the focal point, it will absorb the energy and heat up. 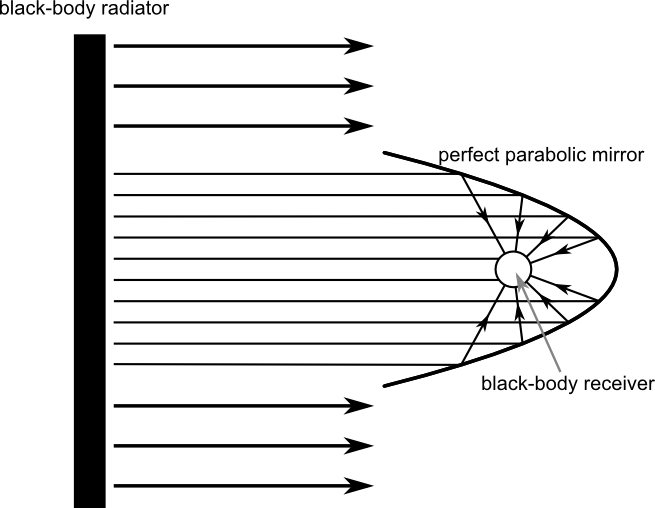 Let's do an net-energy analysis. The photonic energy hitting the sphere is proportional to the geometrical cross section $A_m$ of the mirror: if the mirror is twice as large, it collects twice as much light and the sphere absorbs twice as many photons per unit time.

Since the sphere is a black-body, it emits photons in a radiation according to the Planck spectrum of $T_s$. As far as I understand, the total energy output of that radiation depends on temperature and surface area only. Since the surface is constant, $T_s$ is the only parameter.

In thermal equilibrium, the sphere will emit as much energy as it receives, and we have

We can make the left hand side arbitrarily large since we have an infinitely large plate and we can use a broader or further extended mirror.

The right hand side apparently has a limit: the energy output of the maximally reachable temperature $E_{out}(T_r)$. So, if it is really true, that the sphere cannot get hotter than $T_r$, where does the excess energy go if $E_{in}(A_m) > E_{out}(T_r)$?

Or is that a thing that can never happen? Did I make some other mistake?

UPDATED: I now think my previous answer was wrong, because the set up would be equivalent to the following question: Is a black body sphere inside a black body shell hotter than the shell?

Just change the question to add a carefully crafted lens that focuses all the radiation into the sphere (you could make the shell as large as you want), which of course is impossible to make or it would violate the second law.

I will answer this from the OP, presupposing that there is excess energy according to the arguments offered in the comments:

Conservation of energy holds for an isolated system. Your system is an infinite hot plate at an initial temperature $T_r$, a small sphere at the focus of the parabolic mirror, and an electromagnetic field covering the vacuum ( where the masses are placed). The system is not isolated when you keep the temperature by outside energy input at $T_r$ .

Let us see what happens when there is only an initial temperature $T_r$ , an isolated system.

You have ignored the ambient electromagnetic field , it carries energy (and there is where any excess energy can be stored) going back to the infinite plane and it will be reabsorbed, in the thermodynamic process of equilibrating the temperatures.The plane and the ball will reach a temperature lower than $T_r$.

The moral of the example is that energy conservation holds for isolated systems, in this case the source/sink keeping the temperature fixed has to be considered in the isolation, so excess energy can be extracted to the sink.

Not the answer you're looking for? Browse other questions tagged thermodynamics energy-conservation blackbody or ask your own question.

4
Blackbody radiation through quantum mechanics perspective
2
How to combat the black-body temperature of an object?
1
Trouble understanding the idea of a cavity radiator being a black body
5
“Super dense” black body radiation
0
Conservation of entendu and thermodynamics for a black body embedded inside a high index material (xkcd what if)
0
Technical definition of heat
1
Black body radiation and second law