Finding the Direction when resolving a Vector

When you are finding the resultant of a vector I understand that to find the magnitude you use Pythagorean Theorem and I understand that to find the direction you are going to use $\tan^{-1}$ (or corresponding trig function). My question is how do you decide what angle you are finding? There are two angles and is there a convention for which one you solve for?

I was also wondering, why do you have to add 90 or 180 degrees to vectors outside of the first quadrant? Can you not give the angle and direction?

For example, with the problem:

Find the resultant of the vectors 10 km North and 5 km West. The magnitude is 11.18 km, but exactly how would you decide the angle for direction and why would you have to add 90 to it? (The answer is 26.6 degrees + 90= 116.6 degrees) Could I not say that the resultant is 11.18 km, 26.6 degrees NorthWest? And why do you chose that angle to work with, moving the 5 km vector parallel to complete the triangle instead of the 10 km vector?

Edit: In regards to the sketch below, why is the one on the right considered correct and why would I have to add 90 to it? 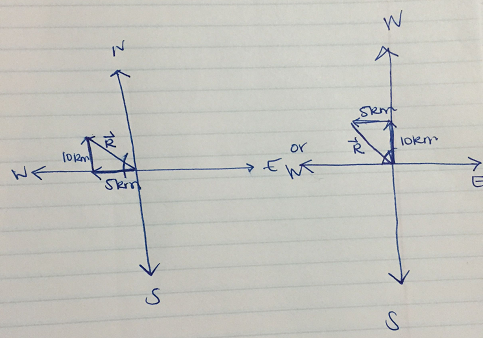 There is no hard and fast convention. What is important is that the direction you state is unambiguous. You might state a given angle as $20^\circ$ South of West, or $200^\circ$ counterclockwise from East. Neither is "more correct", but note that neither is ambiguous, either.

Additionally, although a little far afield from what you're talking about, in optics, the angles of incident light rays are conventionally measured from the normal.

However, no matter how you are measuring the direction of your vector, it's good practice to be as explicit as possible so as not to confuse anyone. An answer like "$\theta$ degrees North of East" is pretty good. Alternately, you could say "$\theta$ degrees above (or below) the horizontal" as long as you still specify the left or right direction as well. "A cannonball is shot to the right, at an angle of 30 degrees above the horizontal" would be an example of this way. Note that the direction is still fully specified.

P.S. The solution does not depend on whether to go to north first and after that to the west or vice versa, like your diagramm suggests. The ambiguity stems from the division $y/x$. So you can have the same line slope by moving in two opposite directions ("north-west" or "south-east").

Not the answer you're looking for? Browse other questions tagged homework-and-exercises vectors geometry or ask your own question.

0
Vector Isolation/ Rotation
0
Finding resultant and direction of resultant
1
How to determine velocity vector direction with respect to acceleration.
2
What's the physical meaning of change in momentum vector?
0
Find the magnitude of the resultant force which these engines exert on the rocket?
2
Finding $(+) (-)$ direction with Cosine and Sine
0
What does it mean to find the component of 2 vectors in the direction of another vector?