Is there an equilibrium for water and air in a tank?

I'll try my best to explain my question with examples because I don't have much knowledge on the theory.

So say that I had a block of water in air, a cube of water, that is dropping. If the cube wasn't too big, I believe that as it will drop, then the air from underneath it will rush to either side of it, as the water displaces the air on it's way down. 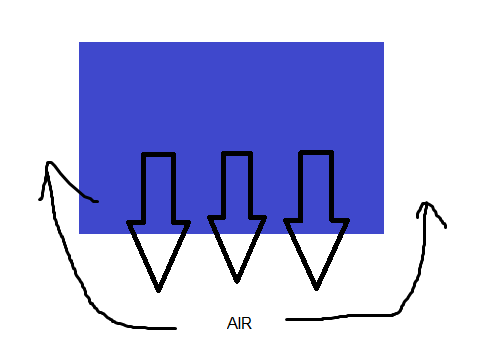 Now lets change the situation. Say I had the cube of water, but now its suspended in the air in a tank (like a fish tank), as shown in the picture. Here, I believe that there is the weight force of the water acting evenly downwards, but the air pressure may be different, as the whole system is bounded by the walls. Logically, I believe that the air would then rush through the center of the water cube, forming a bubble, allowing the water to rush down to the bottom. 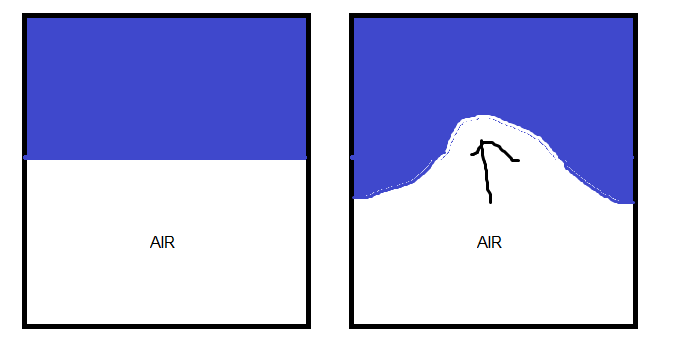 Though this may be completely wrong, I'm not sure. So my question is, is that is there any possible shape for the water to be originally in, so that all the forces sort of balance so that there is no distortions in the shape, and that then the air will be compressed under the force? I understand that perhaps at the microscopic level, if we take into account the random motion of molecules, and other factors, that there will inevitably be some sort of inbalance, but macroscopically what would be the perfect shape? I'm not even sure if any of this makes any sense. Thanks for any help understanding.

The ideal shape for the water to just 'hang' is actually the cube that you've proposed. In this case all of the forces on the water are uniform across the interface. For one region to slip down, another needs to move up (as you've indicated in your diagram). But since every location is experiencing the same forces, there's no reason any spot to start moving.

This a state of exact equilibrium, as is the inverted case where the cube of water is below the cube of are. The difference between the two is what happens when you make even the most tiny disturbance to the surface. With the water on bottom, a disturbance will naturally shrink (raise a parcel of water above the surface and gravity will pull it back down). With the water on top, any disturbance will grow (just as you've drawn).

This general problem is called the Rayleigh-Taylor instability, you can find more here: http://en.wikipedia.org/wiki/Rayleigh%E2%80%93Taylor_instability

Not the answer you're looking for? Browse other questions tagged forces fluid-dynamics pressure or ask your own question.

33
Why should water fall down from an upside down glass of water?

6
Would a fish in a sealed ball swim normally?
8
How does the buoyant force on a cube at the bottom of a tank of water manifest itself?
4
Is there an ideal proportion for water to air in an espresso machine?
4
Is it easier to uncrush a water bottle full of air or water?
3
Concept of surface tension: excess pressure inside an air bubble in a tank of water
1
If a toy boat is added to the side of a tank of water that is balanced on a central pivot, why doesn't the tank tip?