Is it possible to start fire using moonlight?

You can start fire by focusing the sunlight using the magnifying glass.

I searched the web whether you can do the same using moonlight. And found this and this - the first two in Google search results.

What I found is the thermodynamics argument: you cannot heat anything to a higher temperature using black body radiation than the black body itself, and Moon isn't hot enough.

It may be true, but my gut feelings protest... The larger your aperture is, the more light you collect, also you have better focus because the airy disk is smaller. So if you have a really huge lens with a really short focus (to keep Moon's picture small), or in the extreme case you build a Dyson-sphere around the Moon (letting a small hole to the let the sunlight enter), and focusing all reflected light into a point it should be more than enough to ingnite a piece of paper isn't it?

I'm confused. So can you start fires using the Moon?

Moonlight has a spectral peak around $650\ \mathrm{nm}$ (the sun peaks at around $550\ \mathrm{nm}$). Ordinary solar cells will work just fine to convert it into electricity. The power of moonlight is about $500\,000$ times less than that of sunlight, which for a solar constant of $1000\ \mathrm{W/m^2}$ leaves us with about $2\ \mathrm{mW/m^2}$. After accounting for optical losses and a typical solar cell efficiency of roughly $20\ \%$, we can probably hope to extract approx. $0.1\ \mathrm{mW}$ with a fairly simple foil mirror of $1\ \mathrm{m^2}$ surface area. Accumulated over the course of a whole night with a full moon, this leaves us with around $6\ \mathrm h\times3600\ \mathrm{s/h}\times0.1\ \mathrm{mW}\approx2\ \mathrm J$ of energy. That's plenty of energy to ignite a fire using the right chemicals and a thin filament as a heater.

At least one point in your favour is that the light we receive from the Moon has barely anything to do with its temperature. Instead it is mostly a secondary light source "reflecting" light from the Sun towards us.

The second point in your favour (I think) is that the thermodynamic argument seems pretty weak. We are not trying to make Earth as hot as the Sun or anything like that. The only thing we want is to gather enough energy in a sufficiently small volume with oxygen and some fuel to light a fire; hence most of the energy for the fire still comes from the enthalpy of the combustion reaction.

Overall, I would think this is not impossible but probably very inefficient because of the minute fraction of power we receive from the Sun's light scattered by the Moon.

I am bumping this, because there still seems to be no consensus on the matter, even after Randall's What If post and the heated discussions that followed:

My intuitive take (taking points from the discussions): Obviously, Randall's argument holds for blackbodies. However, a part of moonlight is diffuse reflected sunlight, and so should be able to start a fire.

@Marty Green: If my argument is correct, then "adding moons to the night sky" will certainly increase the temperature beyond the Moons' surface temperature (because all we do is add more mirrors).

If you could fill the whole sky with moons you would not light a fire. It would be the same as looking up and seeing a wide expanse of bright shiny sand on a beach. What you can do with lenses and mirrors is no different than filling the sky with moons, so no: you cannot light a fire that way. 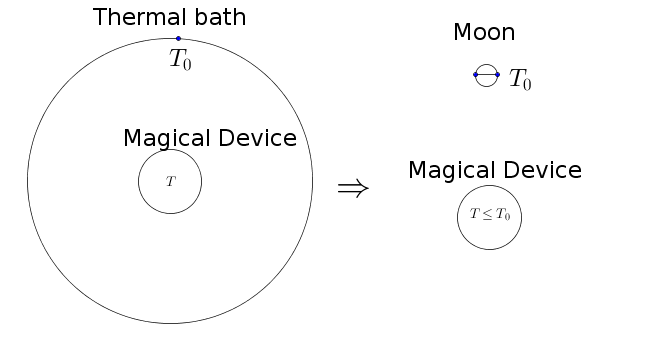 Suppose the "magical" lighting (which might contain the ideal lens) system exists away from Earth. Suppose also we surround this system with a radiation bath of solid angle $4 \pi$ with temperature $T_0$. Then, due to the second law of thermodynamics, the system will be in equilibrium, when the temperature in the "magical" device is uniformly also $T_0$. Then, as to simulate some radiating object (such as Moon), we remove most of the radiation, and leave only a small proportion of the solid angle. Of course, if the "magical" lighting device consists only of lens and mirrors, the radiation towards the heated point can only decrease $\Rightarrow$ it's temperature $T \leq T_0$. Note that the temperature $T$ only depends on the power it is heated, not on the spectrum of radiation.

If arbitrarily large diameter to focal length lens existed, these could be used to focus light of a radiating body (such as Sun or Moon) to arbitrary intensities, giving rise to arbitrarily high temperatures (contradicting the proof).

If the heated point is not black, but radiates only very high-frequency spectrum, the achievable temperatures would be higher, probably temperatures up to the temperature of the sun.

It appears the question is specifically concerned with using a lens.

In the original question: "So if you have a really huge lens...and focusing all reflected light into a point it should be more than enough to ingnite a piece of paper isn't it?"

In which case using solar cells doesn't answer the question.

In other words energy cannot flow from a colder area to a hotter one.

It can also be explained using the optical calculations point of view. See: CuriousOne's comment about a passive optical system and conservation of etendue. You should see this post. Especially the answer by CountIbis which will explain the limits using optic calculations.

Since the question is not constrained in any way, the answer is yes, it is possible. Is it "realistically" possible, no.
To make it possible, all you have to do is concentrate the moonlight (optically,or electrically) until you have the energy required to reach the ignition point of the material. what makes it not realistic is the size, cost, and/or time involved in creating a "concentrator."

Not the answer you're looking for? Browse other questions tagged thermodynamics geometric-optics or ask your own question.

6
Starting a fire with a lens without the sun
7
Is Randall Munroe's "what-if" xkcd correct that magnified moonlight can't get things hotter than the moon?
1
Will magnifying light make it more powerful?
1
How big a lens would you need to light a fire with moonlight?
31
Is it possible to focus the radiation from a black body to make something hotter than that black body?
2
What temperature can I reach using magnifying glass at night?
7
To what extent is the heat in the focal point due to visible light?
2
What temperature is achieved in focus point by 5000 flat 1x1cm mirrors onto a satellite dish?
3
Is it possible to construct a lens which focuses all the light rays from an extended object in one point?
3
Solar Power Fusion
See more linked questions

1
Max temperature that can be obtained from radiation source when nonlinear interaction with matter is important?
31
Is it possible to focus the radiation from a black body to make something hotter than that black body?
0
Change in Shannon entropy of a quantum circuit of Hadamard gate and a loop
6
Why does conservation of étendue matter when showing one cannot focus light to arbitrary temperatures?
4
Why can't lenses transfer from colder body to a hotter one?