Is it possible to separate the poles of a magnet?

It might seem common sense that when we split a magnet we get 2 magnets with their own N-S poles. But somehow, I find it hard to accept this fact. (Which I now know is stated by the magnetic Gauss's Law $\vec{\nabla}\cdot \vec{B} =0.$)

I have had this doubt ever since reading about the quantum-field-theory and I know I might sound crazy but is it really impossible to separate the poles of a magnet?

Is there some proof/explanation for an independently existing magnetic monopole?

Well, in order for this splitting to be possible, the magnet would have to be made of two magnetic monopoles (like charged particles, but with "magnetic charge" instead of electric charge) bound together. No known magnet is actually constructed this way; all real magnets that have been studied are made of either little current loops, or particles that have a spin magnetic moment (and these basically act like little current loops).

It's still an open question whether or not magnetic monopoles exist. Some theories predict that they should, but most have nothing to say about it either way. I am not aware of any theories that prohibit the existence of these monopoles. Quantum field theory in general falls in the second category; that is, there is nothing inherent in QFT that requires magnetic monopoles to exist or not exist.

This is basically how a magnet's atoms look like: 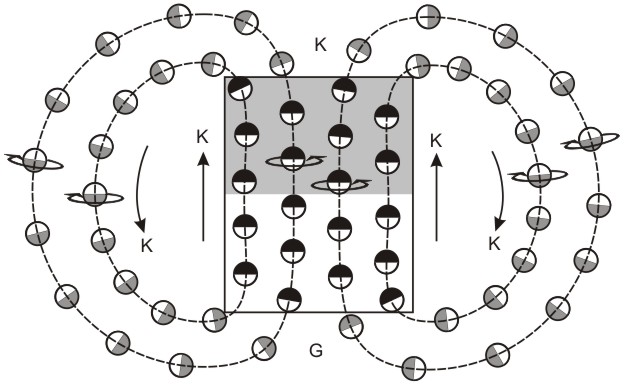 so, when you split it into two, you do not change anything but the length of the magnet. As you can see the North poles(Black sides or "K" as it's in a different language) face north and south poles face south in each part of the magnet.

IF there are such things as monopoles, then it is possible to define a magnetic charge which would allow us to separate a unit magnet into two monopoles. However there are no confirmations for magnetic monopoles so we'll have to accept magnets as a whole for now.

As for black holes, their attraction is gravitational, and not very different from the gravity earth applies on you.

Magnetic monopoles certainly exist. This does not require a GUT, they exist in any theory where the electromagnetic U(1) is compact (i.e. where charge is quantized). This follows only from the semiclassical behavior of black hole decay, and so does not require unknown physics.

To me, this is as certain as the existence of the Higgs. We haven't observed either one, but the theoretical argument is completely convincing.

I suspect your problem is you may want to think about it rhetorically. Magnetic poles are really just a mental shortcut useful to provide a bit of intuition to something that is inherently just math. We don't have physical entities called mag poles, we have a magnetic field, and it works as if it were generated by currents (and maybe spin, which may or may not work like moving charge (a current)). So cut your magnet, and you have two similar, but shorter pieces, and a local concentration of field lines is usually called a "pole", and polarity refers to the signed value of the magnetic field normal to the surface.

Further, the way magnets that you may have encountered work is via the magnetic field induced by moving charge, not by the presence of monopoles. Usually this field is caused by the angular momentum of charged electrons.

Cutting a magnet in two pieces is like cutting a vector: you can change its length but you cannot change its direction (you cannot make it directionless).

Magnetic monopoles appear in some Grand Unified Theories and SUSY models of particle physics, but are not possible in the standard model, so we don't know if they really can exist.

However, even in stabdard electrodynamics you can create the illusion of magnetic monopoles by channelling the magnetic flux between two poles along a thin flux tube or "needle".

Recently some condensed matter physicists were able to use this possibility within a spin ice system to make it seem like magnetic monopoles were moving in the material. This effect was described on some blogs at the time so I'm just going to link to the detailed one at Backreaction rather than try to repeat it myself.

Nevertheless, a truly isolated magnetic monopole that could be thrown into a black hole leaving its twin behind is only possible if some GUT theories are correct. People have tried to observe them by watching the current in a coil for the effect of a monopole that passes through it, but without (confirmed) success.

In theory, if they exist they should have been created in abundance in the very early universe at the time of the GUT scale energies. The theory of cosmological inflation was originally proposed to explain why we don't see them. They would be there but in such small numbers that we can't find one. Our only hope would be accelerate and collide particles at the GUT scale of $10^{12}$ TeV but that is currently beyond our wildest dreams.

No, because found magnet is not composed of poles. Lacking magnetic charges, the creator had to cheat use currents of electric charges. These currents make two poles at once, and these are all magnets found in nature (and stores) today.

Not the answer you're looking for? Browse other questions tagged quantum-field-theory electromagnetism magnetic-monopoles or ask your own question.

38
What is the explanation of the non-existence of magnetic monopoles?
6
Can the poles of a magnet have varying intensity?
3
What happens when a bar magnet is cut in half?
6
Do semiclassical GR and charge quantisation imply magnetic monopoles?
1
Can we create a magnet with only one Pole?