Why is force a localized vector and not a free vector?

A vector which is drawn parallel to a given vector through a specified point unlike free vector in space is called a localised vector. The effect of a force acting on a body depends not only on the magnitude & direction but also on its point of application & line of action.

Another property of the force is that the point of application of a given force acting on a rigid body may be transferred to any other point on the line of action without altering the effect of the force.

What is this all about? I couldn't understand this property infact the whole para. What does the book talk about force in this para? Plz help clarifying the meanings.

A force is a vector acting along a line in space. It may act anywhere along the line and the end result will be the same (2nd paragraph).

The reason pure forces act on lines is that if they move away from the line there will be a torque applied also and the resulting motion will not be the same. The line of action of a force is the locus of the point where no net torque exists for this force.

Given a set of forces and torques specified at an arbitrary point, the location (and direction) of the line of action can be found. This line is unique, meaning that only one exists for each set of force and torque components.

In addition, these principles are dual to the idea of rotations about axes. Rotational motion needs to have the location of the rotation axis specified to be fully defined. Any other point away from the rotation axis will exhibit linear motion.

To fully specify the loading on a rigid body you need one of these two pieces of information:

To fully specify the motion of a rigid body you need one of these two pieces of information:

Quantities that require one free vector and one line vector to fully specify something are called screws (or screw vectors). All screws transform from one place to another with the same laws. Some quantities that are screws are:

Quantities that are not screws are:

Note $\times$ is the vector cross product, and $\cdot$ the vector dot product

The localized vector is a vector which we know its magnitude and direction and its point of application , which is the point where the force acts , if the force were free vector , how you will calculate for example the moment ? that won't make any sense ok the second principle i found it in Vector mechanics book called PRINCIPLE OF TRANSMISSIBILITY. check that picture 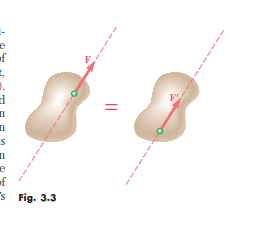 a clearer example which is if u pull the car by a rope from the front that will be the same effect if u pushed it from the rear given that the two forces are equal and on the same line of action , the line of action is the dotted line in the image.

For a force, you need the following bits of knowledge:

Some people call that pair of specifications a "localized vector", because it consists of both a location (#2) and a vector (#1).

3
What is the definition of linear momentum?
6
Rotation and center of mass -- A collection of common doubts
6
How to find the center of rotation? (2D)
1
If force is a localized vector, what does it's resultant mean?
1
Is angular acceleration same about all points of a rotating ball?
-2
How can a force vector be shifted laterally when it is a sliding or a bound vector?

4
Forces as vectors in Newtonian mechanics
1
How to prove using symmetry that electrostatic force acting parallel to the line joining two charges?
1
Point of application when the force is the up thrust?
1
Why do we extend the line of action of a force to meet with another force to have a resultant even if it is outside thw body we are concerned with?
5
If two unlike forces act on two different points of a rigid body, won't the body just start to rotate?
2
Why is there no normal force acting at this pillar?
0
What is the significance of sliding a force vector?