Why the minority carrier lifetime is different for electrons and holes? 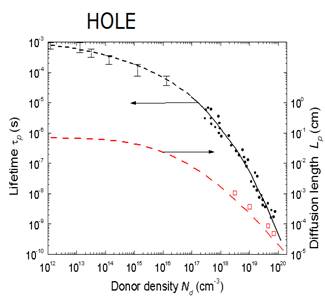 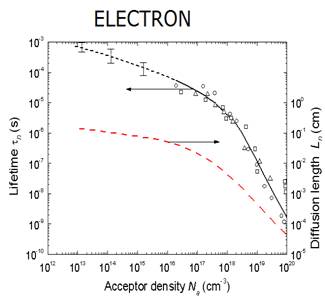 semiconductor-physics carrier-particles
share | cite | improve this question | |
edited May 8 '18 at 4:26

I wonder if you have implicitly assumed an intrinsic semiconductor, where the hole and electron densities are necessarily the same. In that case you would expect the lifetimes to be the same, and indeed if you look at the two graphs you'll see the low doping lifetime is around $10^{-3}$ seconds in both cases.

Not the answer you're looking for? Browse other questions tagged semiconductor-physics carrier-particles or ask your own question.

3
What is the difference between electrons and holes in silicon?

1
Why do the drift and diffusion components cancel for each type of carrier if EHP generation plays such big role in p-n-junctions?
6
How did the Bardeen-Brattain point-contact transistor work?
2
Steady state of diffusion current in semiconductors
4
In a positively biased PN junction, where do the injection carriers come from?
1
Why are holes the majority carrier in P-Type semiconductor?
0
Diffusion Current Calculation Following Ambipolar Transport Equation Solution
0
Mobility of electrons and holes